An era, and one of the most aggressive experiments in monetary policy in history, is about to end with the European Central Bank president, Christine Lagarde, signalling a European exit from the unconventional policies it has presided over since the 2008 financial crisis.

In a blog post earlier this week Lagarde foreshadowed the end of the ECB’s asset purchases – its “quantitative easing” – early in the September quarter this year. That would, she said, enable “lift-off,” or an increase in the ECB’s key policy rate, at its July meeting. 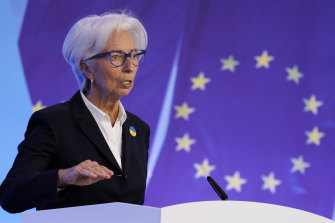 ECB president Christine Lagarde has signalled a European exit from the unconventional policies it has presided over since the 2008 financial crisis.Credit:Getty

“Based on the current outlook, we are likely to be in a position to exit negative interest rates by the end of the third quarter,” she said.

Before the end of this year, therefore, the experiment with quantitative easing that began during the financial crisis, and the ECB’s negative interest rates that have been in place since Europe’s sovereign debt crisis in 2014, will have disappeared.

The ECB is, like the US Federal Reserve Board, moving to normalise the unconventional monetary policies that have shaped the post-2008 environment for economies and markets.

Like the Fed, the motivation for the relatively abrupt change of course has been the recognition that inflation the ECB had deemed to be transitory last year has become entrenched and, in Europe’s case, greatly exacerbated by the impact on the supply and prices of European energy of Russia’s invasion of Ukraine.

Headline inflation in Europe is 7.4 per cent and core inflation 3.5 per cent, way above the ECB’s target of 2 per cent. Policies designed to try to stimulate inflation (and which had failed to do so until the pandemic and its supply chain disruptions ignited it) have been rendered anachronistic by the biggest outbreaks in inflation in decades.

Unlike the US, the eurozone isn’t confronted by overheating economies, which remain relatively weak.

It’s the supply chain issues, the war and a weak currency – until this week the euro was at five-year lows against a US dollar that has been strengthening markedly in response to the Fed’s sudden adoption of tighter monetary policies – that are driving the inflation rate.

Lagarde singled out “imported” inflation, describing it as a “terms of trade tax.” Over the last year, she said, the euro area had transferred €170 billion ($257 billion), or 1.3 per cent of its GDP, to the rest of the world via the net cost (after accounting for more competitive exports) of higher import prices. 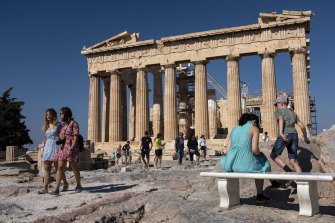 The ECB’s shift from policies that have seen its balance sheet explode from about €1.5 trillion in 2007 to about €8.8 trillion today will add to the global monetary tightening that is already wreaking havoc in investment markets. The Fed’s balance sheet swelled from less than $US1 trillion ($1.4 trillion) to about $US9 trillion over the same period.

The ECB’s proposed actions will, however, help weaken a US dollar that was appreciating rapidly and not just against the euro.

That could provide some relief for emerging market economies and even China, which were experiencing capital outflows and higher borrowing costs and debt repayments on US dollar-denominated debts as the dollar strengthened.

The dollar had appreciated about 8 per cent against the basket of its major trading partners’ currencies this year and provoked talk of a new Plaza Accord (a 1985 agreement by the G-5 economies to force the value of the then-soaring dollar down) before Lagarde’s blog post.
The dramatic shift in the ECB’s policies, assuming they do eventuate, isn’t without risk.

The pandemic has wrought considerable damage to some European economies that had very weak finances even before COVID hit. Over-leveraged economies have added even more debt even as their condition deteriorated.

The post-financial crisis stresses that nearly blew the eurozone apart was centred in southern Europe (remember “Grexit” and “Quitaly”) and they will feel the brunt of higher interest rates more than Germany or France with their stronger economic fundamentals.

The potential for a new sovereign debt crisis in the eurozone is real. 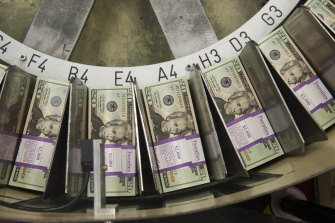 The ECB’s proposed actions will help weaken a US dollar that was appreciating rapidly and not just against the euro.Credit:Getty

Southern Europe, and Italy and Greece in particular, have been kept afloat by the negative interest rates and ECB bond-buying. The ECB has soaked up almost all of Italy’s debt issuance.

The end of quantitative easing and higher rates, albeit still at negligible levels, will put the squeeze on the southern European economies and impose new pressures on the cohesiveness of the European Project and a bloc that nearly fractured in the aftermath of the financial crisis because of the disparate conditions of its individual economies.

If the ECB follows through on Lagarde’s comments it will finally end the novel period of monetary policy.

The ECB’s negative rate – its key rate today is minus 0.5 per cent — was designed to try to coerce European lenders to lend rather than pay to lodge their surplus cash with the central bank and other financial institutions to accept more risk in pursuit of positive returns.

The post-financial crisis stresses that nearly blew the eurozone apart was centred in southern Europe and they will feel the brunt of higher interest rates more than Germany or France with their stronger economic fundamentals.

The ECB would argue that the policy was successful, although it squeezed already modest European banks’ profitability, undermined the solvency of pension funds and produced perverse outcomes by encouraging a flood of cash into negative-yielding assets as investors feared rates night go further into negative territory. There were even corporate “borrowers” who were able to raise debt at negative coupons – they were paid to borrow!

That wasn’t completely peculiar to Europe. At their peak in 2020 there were close to $US19 trillion of corporate and government debt instruments with negative yields. Today there’s virtually none.

If the Fed and ECB and others (like our Reserve Bank) can back out of the unconventional monetary policies that the two big central banks have pursued for most of the past 14 years without blowing up economies and markets in the process (or at least not completely melting down markets) it would be a major milepost in the progress from the financial crisis towards more historically normal settings.

That “if,” however, looms large for Italy and others in southern Europe, for China and emerging market economies and investors in everything from shares to crypto assets, to bonds – as does a successful transition and the dramatic tightening of global financial conditions and higher cost of credit that would imply. It’s a brave and risky new world.

25/05/2022 Markets Comments Off on Brave new world: Europe is about to take a risky step into the future
Markets