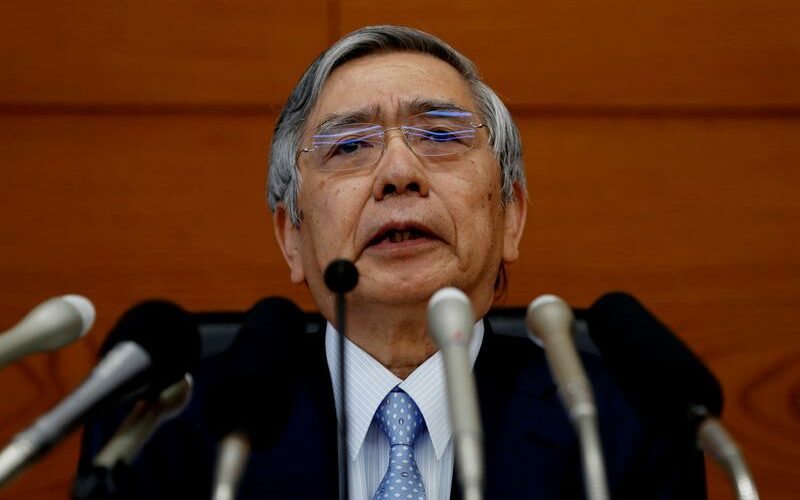 TOKYO (Reuters) – Bank of Japan Governor Haruhiko Kuroda stressed the need to keep long-term borrowing costs stably low to underpin an economy hit by the coronavirus pandemic, signalling that widening an implicit band for its yield target was hardly a done deal.

Markets are rife with speculation the BOJ will widen to 60 basis points from the current 40 points the band at which it allows 10-year bond yields to move around its 0% target.

Kuroda said the BOJ has not reached a conclusion yet on whether it will widen the band, saying “much more debate” was needed before deciding at the March review of its policy tools.

“It’s a difficult decision. The economy remains under pressure from the COVID-19 pandemic,” Kuroda told parliament.

“While we need to enhance bond market functions, it’s also important to keep the yield curve stably low for the time being,” he said on Friday.

The BOJ caps the 10-year bond yield around zero under a policy dubbed yield curve control (YCC), and currently allows the benchmark yield to move 40 points around its 0% target.

Expectations of a strong post-pandemic recovery have pushed up global yields including those for Japan, where the 10-year yield crept near the BOJ’s implicit 0.2% ceiling.

Allowing yields to move more flexibly around the BOJ’s target would make YCC more flexible, one of the key goals of a review of its policy framework scheduled on March 18-19.

The challenge, however, would be to make the tweak without giving markets the BOJ is tightening policy.

At the March review, the BOJ will also look at ways to make its purchases of exchange-traded funds (ETF) more flexible.

“We have been and must continue to buy ETFs flexibly. We’ll discuss at the March review how specifically we could make our purchases more nimble,” Kuroda said.

Kuroda brushed aside the view Japan is experiencing an asset bubble, saying recent stock price rises reflect expectations of a recovery in the global economy and corporate profits.

“There is still high uncertainty on the economic outlook, so we will closely watch market developments carefully,” he said.

Transgender Children Across The U.S. Are Fighting For Their Lives (Again)