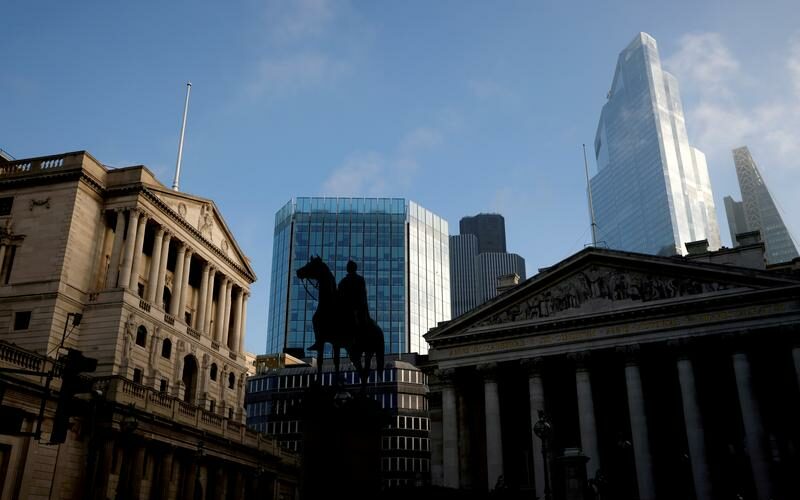 LONDON (Reuters) -Bank of England interest rate-setter Michael Saunders said on Thursday that the central bank could decide to stop its current programme of government bond purchases early due to an unexpectedly sharp rise in inflation.

FILE PHOTO: The Bank of England and the City of London financial district in London, Britain, November 5, 2020. REUTERS/John Sibley//File Photo

A day after another top BoE official said the time for action might be approaching, Saunders said continuing bond purchases later this year – when price growth could exceed 3% – risked entrenching inflation expectations.

British consumer price inflation jumped to 2.5% in May, data showed on Wednesday.

“For me, the question of whether to curtail our current asset purchase program early will be under consideration at our forthcoming meetings,” Saunders said in a speech.

“If activity and inflation indicators remain in line with recent trends and downside risks to growth and inflation do not rise significantly … then it may become appropriate fairly soon to withdraw some of the current monetary stimulus.”

Sterling jumped by more than half a cent against the dollar and the euro after Saunders’s remarks, and British government bond prices fell on the prospect of an end to BoE purchases, taking five-year gilt yields near a two-week high.

The BoE committed in November 2020 to buy a further 150 billion pounds ($208 billion) of government bonds over the course of the following year.

Chief Economist Andy Haldane was a lone voice at May and June’s Monetary Policy Committee meetings – his last before leaving the BoE – to call for the scheme to be ended early.

Saunders comments added to signs of a change in stance at the BoE, as inflation picks up sharply and strength in the labour market reduces the BoE’s fear of a spike in joblessness when government furlough support stops at the end of September.

On Wednesday, Deputy Governor Dave Ramsden said inflation could hit 4% this year, and the BoE could need to reverse its monetary stimulus sooner than he had expected.

Until now, the BoE has said inflation pressures from higher energy prices and supply-chain bottlenecks would be temporary, as Western economies adjusted to reopening after the pandemic.

Saunders said higher short-term inflation caused by energy prices was not something the BoE could tackle, but he was concerned that other price pressures could persist over the two- to three-year time horizon the BoE uses to target inflation.

“A modestly tighter stance … would help ensure that inflation risks 2-3 years ahead are balanced around the 2% target, rather than tilted to the upside, which I suspect is the case with the current policy stance,” he said.

Options for tightening policy included ending the bond purchase programme a month or two before it is due to end in late 2021 and further monetary policy action in 2022, he added.