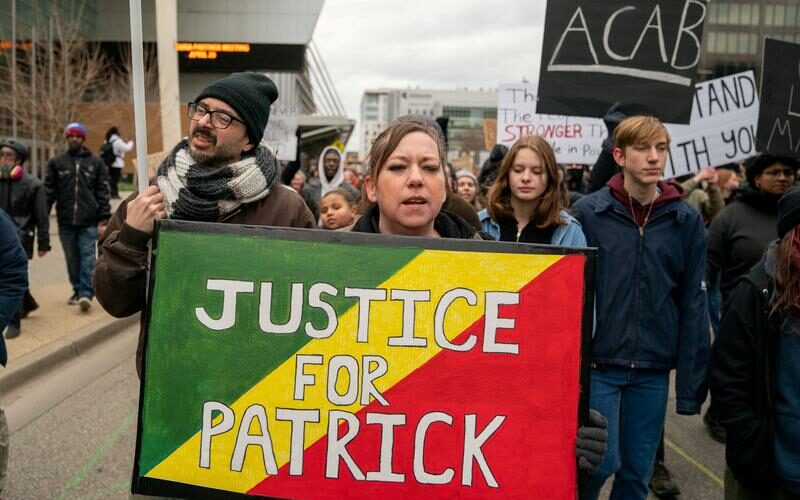 (Reuters) -A Black man who was killed by a Grand Rapids, Michigan, police officer during a traffic stop earlier this month, sparking protests in the city, was shot in the back of the head, a forensic pathologist who performed an independent autopsy said on Tuesday.

FILE PHOTO: Demonstrators protest the killing of Patrick Lyoya, an unarmed Black man who was shot and killed by a Grand Rapids Police officer during a traffic stop on April 4, in Grand Rapids, Michigan, U.S., April 16, 2022. REUTERS/David ‘Dee’ Delgado

During a news conference in Detroit, forensic pathologist Werner Spitz and attorneys for the family of Patrick Lyoya said the autopsy found the 26-year-old was shot once and that the police officer held his gun to the back of Lyoya’s head.

“That is now scientific evidence of this tragic killing where his family believes was an execution,” civil rights attorney Ben Crump said during the news conference.

Spitz said he found no signs of a struggle such as scratches or bruises on Lyoya’s body, noting that the only injury was a bullet wound.

He also said he did not know the caliber of bullet that was fired, but that it was a “powerful bullet” that killed the man.

The death of Lyoya, a Congolese refugee, outraged members of his family and touched off protests in Grand Rapids by activists who say it represents the latest example of police violence against young Black men.

Lyoya’s family is demanding that authorities dismiss the officer who shot him from the force and file criminal charges against him.

Grand Rapids police were not immediately available to comment in response to the independent autopsy findings.

Grand Rapids police officials have placed the officer, who has not been named publicly, on administrative leave, and have asked the Michigan State Police to investigate the shooting.

Kent County Chief Medical Examiner Stephen Cohle said in a statement that he performed an autopsy on the day of the incident and prepared a death certificate with the cause and manner of death.

He also said toxicology and tissue results were pending and may take 60 days to be completed and that the full autopsy report will not be made public until the State Police concludes its investigation.

“We have to investigate whether this was a class ‘driving while black’ case,” attorney Crump said, noting that the officer was traveling in the opposite direction of Lyoya before the stop.

Last week, police released videos of the incident taken from the dashboard of the officer’s squad car, from his body-worn camera and from a neighbor’s surveillance camera.

They show Lyoya stepping out of the car on a rainy street, seemingly confused and asking “What did I do?” as the policeman repeatedly asks for a driver’s license and orders him to get back inside the vehicle.

Lyoya appears to be complying, but then closes the driver’s- side door and attempts to walk away, resisting the officer’s attempts to handcuff him.

Following a short foot chase, the two men grapple on the lawn, at one point fighting over the officer’s stun gun, before Lyoya is shot.

The incident began after the officer stopped Lyoya over suspicions involving his license plate.

19/04/2022 Markets Comments Off on Black man shot in back of head by Michigan police, independent autopsy says
Markets