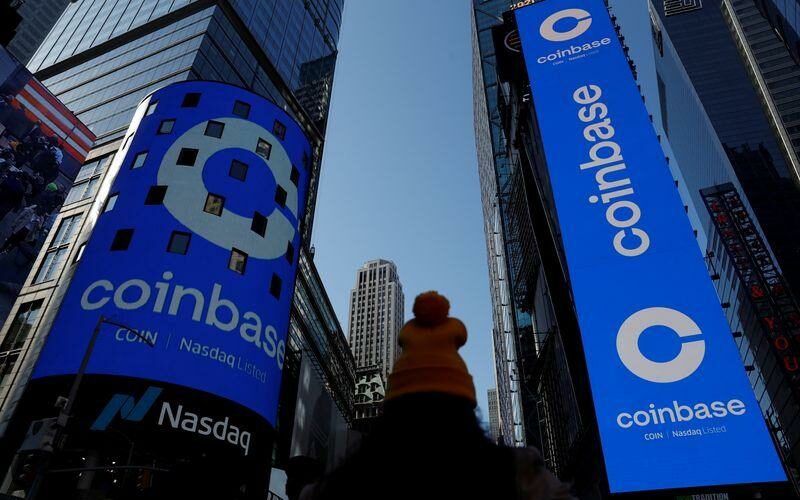 NEW YORK (Reuters) – Volatility in bitcoin eased on Wednesday, a day after El Salvador adopted the crypto asset as legal tender, but the threat of a U.S. lawsuit against crypto exchange Coinbase Global Inc underscored the rocky road ahead for cryptocurrencies.

The logo for Coinbase Global Inc, the biggest U.S. cryptocurrency exchange, is displayed on the Nasdaq MarketSite jumbotron and others at Times Square in New York, U.S., April 14, 2021. REUTERS/Shannon Stapleton

The Securities and Exchange Commission issued Coinbase with a Wells notice, indicating the U.S. regulator will sue if the crypto exchange goes ahead with the launch of its interest-bearing “Lend” product for crypto assets.

Coinbase said it would delay the launch until at least October. Shares of Coinbase last traded down 3.50% at $257.43.

Trading in bitcoin was subdued after suffering its heaviest losses in 2-1/2 months on Tuesday, when it hit a near four-month high of $52,956 before ending the day down 11.1%, its largest plunge since June 2.

At one point on Tuesday, the digital currency fell as much as 18.6%, wiping out more than $180 billion in market value.

Tuesday was a historical day for bitcoin as El Salvador’s decision to make the digital currency legal tender got off to a bumpy start.

Technological glitches hampered its use while street protests by mistrustful citizens broke out in the Central American country.

As bitcoin wobbled, Salvadoran President Nayib Bukele said his government purchased an additional 150 bitcoins on Tuesday, worth around $7 million.

“That has underscored the difficulty in trying to protect the value of bitcoin as its own currency,” said Nana Otsuki, chief economist at Monex Securities. “The buying didn’t seem to be effective in halting its fall.”

Analysts said the move by El Salvador showed crypto currencies are here to stay but like any innovation, will suffer birthing pains as the currency’s volatility must be resolved.

Bitcoin has been pitched to a largely unbanked population in El Salvador as an effective savings vehicle and a store of value for users, said Ganesh Viswanath-Natraj, assistant professor of finance at Warwick Business School in Britain.

The trading frenzy on Tuesday saw U.S. cryptocurrency exchanges Kraken, Gemini and Coinbase struggle with delays in some transactions. All said their systems have since been restored.

Coinbase is not the only cryptocurrency platform to come under regulatory scrutiny. Several states have cracked down on BlockFi.