As was the case for many travel-facing stocks, 2020 was a rough year for shares of car-rental firm Avis Budget (CAR).

As travel shut down around the world amid the pandemic, the firm’s stock price dropped more than 77%. Even by the end of last year, it was still 22% off pre-pandemic levels.

When the stock tanked in February last year, Bank of America automotives analyst Aileen Smith began to cover the firm, as well as other travel stocks that were hit hard.

In January 2021, Smith put a buy rating on the stock, and then lifted her price target by 40% to $70 per share in March. It’s turned out to be one of the best calls of her career so far: Since the start of the new year, the stock is up 149%. Its recovery has been supported by the bankruptcy filing of Hertz, a key competitor and the only other publicly listed car-rental company.

“That’s been one of my proudest moments career-wise,” Smith, who was recently named to Insider’s list of the rising stars of equity research, said during an April interview. “It wasn’t something that we had done a lot of work on prior to that, so going out with a good call on the stock really made me feel good after all the work that went into it.” 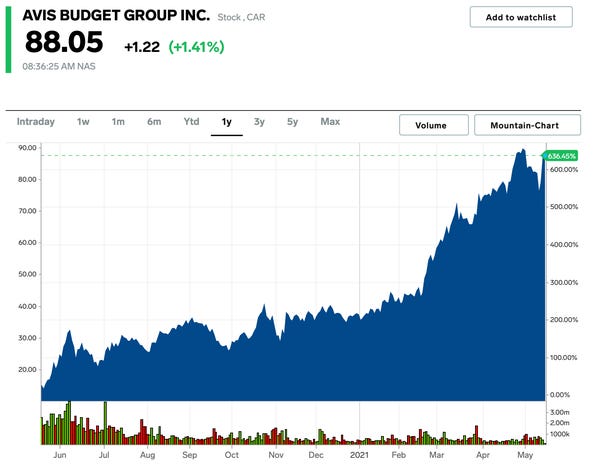 But while Avis Budget has seen such massive appreciation over the last four-and-a-half months, Smith said the stock still has room to run in the second half of the year as demand picks back up.

“A lot of the reasons we put on a buy-rating [in January] are still valid,” Smith said. “Demand inflection is very clearly coming. You have accelerating vaccinations, the economy is reopening, there is green shoots around airline reservations, rent-a-car reservations, and it’s looking like the recovery in the travel environment is very clearly happening and will continue into the second half of this year.”

She continued: “It’s been a pretty monster stock call already, but it’s still one of the names in our group that we like particularly as we look into the back half of the year and that demand inflection looks more and more real to us.”

Even more bullish than Smith is Michael Millman of Millman Research Associates, who has a price target of $105 on Avis Budget. None of the analysts who cover the stock has a sell rating, according to Bloomberg data.

How to succeed in equity research

Smith, who started at Bank of America as an intern during her time at Columbia University, has relied on her self-drive to propel her career forward.

She said her experience as a swimmer in high school and at Columbia has helped her work in equity research in terms of staying disciplined and goal-oriented. She recommended young equity researchers looking to have career success have short, medium, and longer-term goals to aim for.

Smith also said remaining intellectually curious by testing and retesting assumptions and looking at things from new angles is an important trait for an equity researcher.

Finally, Smith said asking questions has been crucial in her career.

“Don’t be afraid to over-ask. And I say that from an operational perspective, whether it’s asking questions to corporate or asking questions to your boss or your team members to better understand your sector or stocks or maybe just the market in general,” she said. “And then you can extend that into the career side of things, which is asking for more responsibility, more coverage.”

Get the latest Bank of America stock price here.

17/05/2021 Markets Comments Off on Avis Budget has soared more than 100% since Bank of America analyst Aileen Smith put a buy rating on it in January. She told us why the stock still has room to run this year, and shared her best advice for succeeding in equity research.
Markets