A former NSW Police officer, who a grand jury heard purchased a computer program called “Evidence Eliminator,” is at the centre of what law enforcement authorities claim is the largest ever tax evasion case in United States history.

Evatt Tamine, who studied law while working at Sydney’s Newtown police station, moved to the tax haven of Bermuda where he set up practice as a barrister in 1999. 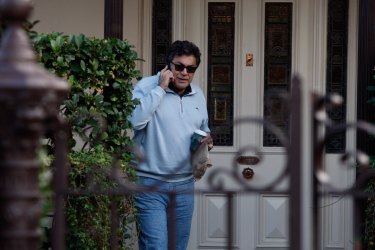 Australian barrister Evatt Tamine at his Balmain residence in May 2020.Credit:Dean Sewell

For the next 20 years Mr Tamine, 56, codenamed “Redfish” by his employer, is alleged to have created a complex network of offshore companies and trusts and utilised false paper trails to help reclusive Texan billionaire Robert T. "Bob" Brockman allegedly evade US$2 billion (AU$2.82b).

According to a San Francisco grand jury indictment released in the US on Thursday, Mr Tamine has been given immunity from prosecution and is the star witness against his former boss who is facing 39 charges including wire fraud, money laundering, tax evasion, evidence tampering and conspiracy.

Since 2010 Mr Tamine was the sole trustee of a Bermudan entity, the St John's Trust Company (SJTC). But the billions of dollars in assets ultimately belonged to Mr Brockman, who made his fortune supplying software and services to the automotive industry, the indictment suggests.

In May the Herald first revealed Mr Brockman’s legal team was using the British and Bermudan courts to accuse Mr Tamine of "stealing trust assets of the value of more than $US20 million." In the Bermudan Supreme Court earlier this year, Mr Tamine's lawyers claimed the proceedings were designed to discourage him from assisting the US tax probe into Mr Brockman. 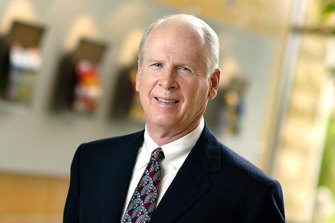 Texas billionaire Bob Brockman has been charged with evading $US2 billion in tax in what prosecutors say is the largest US tax case ever against an individual.

Mr Tamine was a “co-operating witness" in a "tax and money laundering investigation" by US authorities, his lawyers told the judge. They also said the suspected tax evasion by Mr Brockman was "more than $US2 billion of unreported gains" and if the matter proceeded to trial "it will be one of the largest tax evasion cases by individuals in US history.”

Among the sensational allegations contained in the indictment against Mr Brockman, 79, is for years he used encrypted devices, elaborate codenames and instructed his underlings, including Mr Tamine, to falsify, backdate – and later – to destroy crucial documents.

Mr Tamine was given the codename “Redfish” while Mr Brockman’s called himself “Permit.” The Internal Revenue Service was codenamed “the House.”

Another conspirator, Robert Smith, was “Steelhead.”

Mr Smith was recently described by the Wall Street Journal as “the wealthiest Black person in the US”. In Forbes magazine’s 2018 issue of “The World’s Richest People” the private equity guru was on the cover, along with the promise to reveal: “The secret behind his $4.4 billion fortune.” 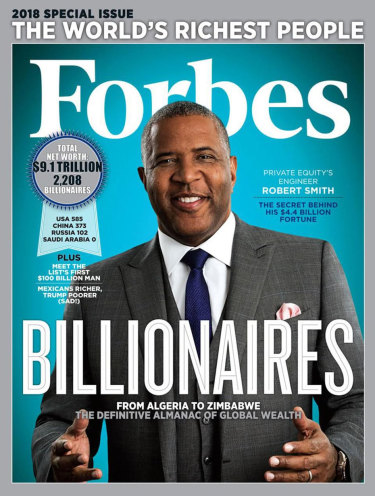 Robert Smith on the cover of Forbes’ 2018 issue of “The World’s Richest People.”

The secret was not a pleasant one and Mr Smith recently reached a US$140 million tax settlement and, in return for immunity, “Steelhead” has agreed to co-operate with federal prosecutors in the case against Mr Brockman.

In July 2008, Mr Brockman is alleged to have used his encrypted email system to give Mr Tamine pointers on how to create “more convincing backdated documents.” In one email the billionaire said “all copy machine/laser printer paper” could be tied to the year of manufacture. “For that reason I always set aside some packets of copy paper with dates on them – for potential future use.”

In December 2010, Mr Brockman is alleged to have told Mr Tamine to “fabricate a backdated memorandum” to create a “fictitious conversation” with an employee who had died.

Land title records show in August 2014 Mr Tamine paid AU$3.9million for a house in Mandalong Road, Mosman. In 2019 he sold his Mosman mansion for $6.05m and then smashed the Balmain record with his $7.5 million purchase of a house on Darling Street that same year.

In 2016 Mr Tamine was directed by his boss to transfer US$32million from an account at Mirabaud Bank in Switzerland to a Florida bank account to purchase a luxury yacht “Turmoil” (later renamed “Albula”).

The yacht, which had eight staterooms for 16 guests, as well as accommodation for 14 crew, also boasted a gym, hair salon and helipad. On Christmas Day, 2017, Mr Brockman instructed Mr Tamine to position the yacht in Barcelona ready for the Brockmans' forthcoming European sojourn because the billionaire didn’t want to be billed for the costs of moving the yacht. “For appearances sake it would probably be good for you [and your family] to take some vacation in that time frame before we get there,” instructed Mr Brockman in an encrypted email. 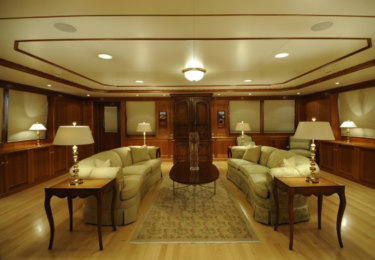 Inside Bob Brockman’s luxury yacht “Turmoil” (later renamed “Albula”) which he arranged for Mr Tamine to purchase for US$32million via funds in a Swiss bank account.

The Herald has previously revealed that on August 29, 2018 a search warrant was signed by the Chief Justice of the Supreme Court of Bermuda on behalf of the US Department of Justice and the IRS, the following week, the Bermudan police raided the Tamines’ house and later seized an encrypted server from a storage unit.

According to the grand jury indictment, Mr Brockman has also been charged with evidence tampering and the destruction of evidence. After being granted immunity, Mr Tamine informed authorities that, at Mr Brockman’s direction, he had used hammers, shredders and other means to destroy documents which would show his boss’s involvement in evading billions of dollars in tax.

In later 2016, when he suspected that he might be under investigation, the Texan billionaire is alleged to have “corruptly” ordered Mr Tamine to “alter, destroy and mutilate documents” to prevent US authorities from learning his long-hidden secret: for years he had used foreign trusts and tax havens to avoid paying tax.

Mr Brockman, who has pleaded not guilty, has been described as a tough, hard-nosed businessman who prefers to litigate than negotiate. In 2014 Mr Brockman launched an unsuccessful lawsuit in the Texas Supreme Court to uncover the identity of "Trooper" – a blogger who had been posting critical comments about the billionaire.

According to court documents, the blogger said Mr Brockman was a "lunatic" and a "crook" and likened him to Bernie Madoff, who was jailed in 2009 for running the biggest Ponzi scheme in US history. The identity of “Trooper” remains a mystery after the court rejected the billionaire’s attempts to unmask him.

The most important news, analysis and insights delivered to your inbox at the start and end of each day. Sign up to The Sydney Morning Herald’s newsletter here, to The Age’s newsletter here and Brisbane Times‘ here.