US economy is in a good place: Atlanta Federal Reserve president

With unemployment near record lows and Federal Reserve models predicting a steady economy over the next six to twelve months, Atlanta Fed President Raphael Bostic says the economy “is in a really good place.”

Federal Reserve estimates suggest fourth-quarter economic growth will be in the 1.5 to 1.75 percent range, getting the U.S. to a 2019 annual GDP growth of around 2 or 2.1 percent, Bostic told FOX Business’ Edward Lawrence.

“We’re settling into a phase where we’re going to be at our long-run steady-state level of GDP growth,” Bostic said on Friday.

This comes as the economy continues to slow down from its 2018 growth. Bostic, however, does not expect the slowdown to exceed the Fed's projections.

“In my view, where we are for policy right now, is we should be taking a wait and see attitude just to see how the economy responds to the stimulus [and] the accommodations that we’ve introduced into the marketplace,” Bostic said. He acknowledged that there is has been talk of risks in the economy, but noted that their outcomes are still unknown. 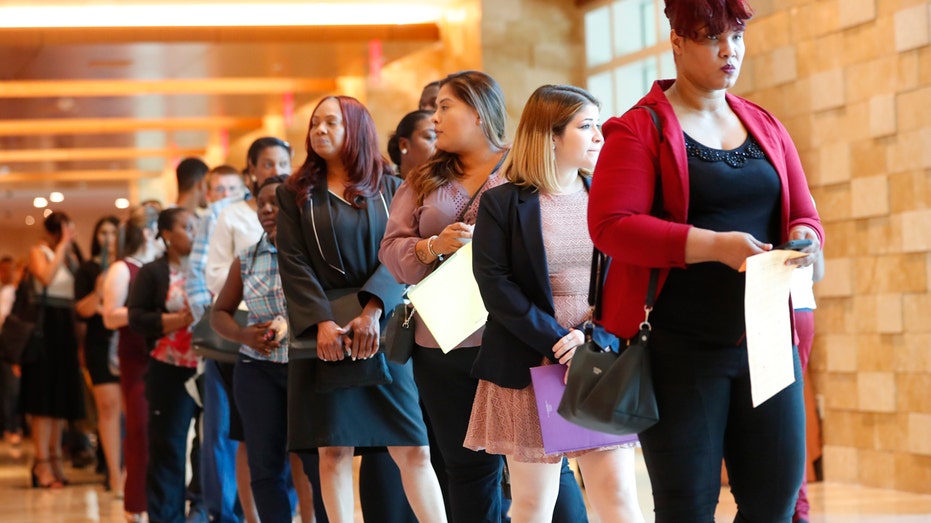 Applicants line up at the Seminole Hard Rock Hotel and Casino Hollywood during a job fair in Hollywood, Fla. (AP Photo/Wilfredo Lee)

In August of this year, yields on 2-year and 10-year U.S. treasury bonds inverted, sparking fears of recession within the following 24 months. Since that point, however, the yield spread has widened to 25 basis points, FOX Business reported. In the weeks following the inversion, the probability of recession increased to 40 percent, according to the New York Federal Reserve. On Thursday this probability decreased to 29 percent.

“Next year, it’s very hard to say what our policy position should be. We have to wait and see what happens,” Bostic said.

If the economy is “much hotter” than the Fed’s current expectations and fast spikes in inflation occur, Bostic said, he would be comfortable with rate hikes in the new year. However, there is nothing to suggest this would happen.

“I’m really much more concerned about the trajectory of inflation and if it looks like it’s going to start spiraling away from out two percent target, that’s when I would get concerned,” Bostic said.

Conversely, if economic growth is slower than the Fed’s predicted long-run average, then, he argued, the central bank should seriously consider accommodations.

“This last one was difficult. I would have been more comfortable with a hold—continue to wait and see,” Bostic said when asked about the FOMC’s most recent interest rates cut. He added though, that he does not believe the Fed is currently not “super-accommodative,” to a point where their policy would cause economic overheating.

“So I’m comfortable with where we are,” he added.

Bostic also discussed the approach businesses are taking amid market uncertainty. He suggested executives are likely waiting for things to settle down before making major investment decisions. Once that happens, he said, executives will evaluate their opportunities to make “big strides forward” in increasing growth and productivity. Bostic also acknowledged that companies in the middle of costly long-run strategies are unlikely to just change course.

Uncertainty puts a damper on adventurism, innovation, and aspiration to some extent, Bostic argues.

“Our policy approach is to provide certainty over the long term and we believe that is the best approach to getting the best and largest amount of investment for growth,” he said.