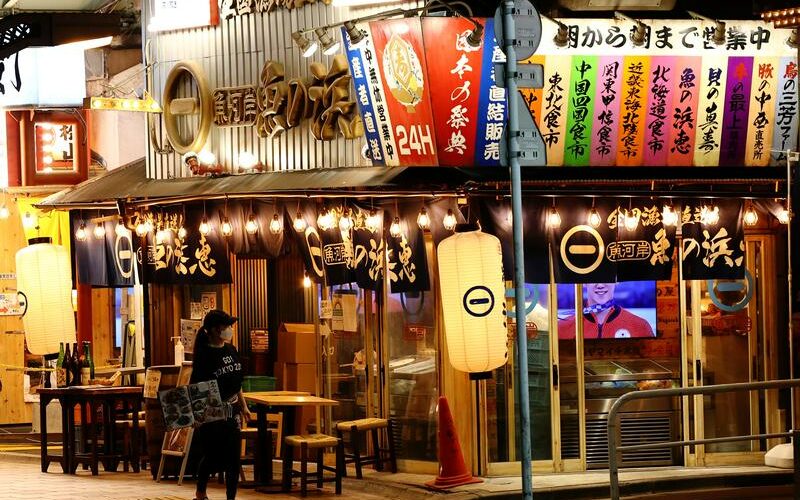 (Reuters) – Asian countries from Australia to Japan and the Philippines announced tighter COVID-19 restrictions on Friday, as they battle worsening coronavirus outbreaks, driven by the more contagious Delta variant.

FILE PHOTO: A waitress wearing a protective mask, amid the coronavirus disease (COVID-19) outbreak, waits for customers outside a restaurant in Tokyo, Japan, July 29, 2021. REUTERS/Kim Kyung-Hoon

Detected in some 96 countries, the Delta variant, first identified in India, has become a concern globally, prompting even countries with advanced vaccination programmes such as the United States, Israel and Singapore to re-impose some restrictions.

But it is having a bigger impact on Asia where many countries are battling record cases now, as the region’s low vaccination rates have left hundreds of millions of people exposed to the highly transmissible variant.

The U.S. Centers for Disease Control and Prevention (CDC) has described Delta to be as contagious as chickenpox and could cause severe illness, the New York Times reported, citing an internal CDC document.

The variant was also more likely to break through protections afforded by the vaccines, the report said, adding that the agency’s reversal on guidelines for whether fully vaccinated Americans should wear masks was based on this document.

“We know from the research that it (Delta) has a viral load 1,000 times higher than previous variants, that’s why we see more cases because it transmits more easily and faster,” Dicky Budiman, an epidemiologist from Griffith University in Queensland, told Reuters.

He said Delta appears to cause more severe symptoms, especially regarding breathing difficulties.

Already under a lockdown, Sydney is now facing its toughest measures yet, including mandatory testing in the worst affected suburbs, as the infection numbers held persistently high five weeks since restrictions began. From Monday, army personnel will help police in Australia’s biggest city check that people who have tested positive for the virus are isolating.

The Philippines announced a plan on Friday to put the Manila capital region, a sprawl of 16 cities and home to more than 13 million people, in lockdown for two weeks to contain the spread of Delta and to shield the country’s medical system.

India reported on Friday its highest number of daily cases in three weeks, the latest evidence of a worrying trend of rising cases that has forced one state to lock down amid fears of another wave of infections.

In Japan, the government on Friday proposed states of emergency through the end of August in three prefectures near Olympic host Tokyo and the western prefecture of Osaka, as COVID-19 cases spike to records, overshadowing the Summer Games.

“Infections are broadening. The situation is extremely severe,” Economy Minister Yasutoshi Nishimura said, warning infections have not yet reached a peak, judging by the increased movement of people and high number of Delta cases among those testing positive for the virus.

Vietnam, which has fully vaccinated less than 1% of its 96 million people, is mobilising private hospitals to take COVID-19 patients to contain a worsening outbreak driven by the Delta.

After successfully containing the virus for much of the pandemic, Vietnam has been facing record daily increases in infections since late April.

“The COVID-19 pandemic is evolving in a very complicated manner and is on the worsening trend in many cities and provinces,” The Ministry of Health said in a statement.

New studies show that fully vaccinated people who become infected carry as much virus as unvaccinated people do, suggesting they may be able to transmit the infection to others, CDC Director Rochelle Walensky said earlier this week.