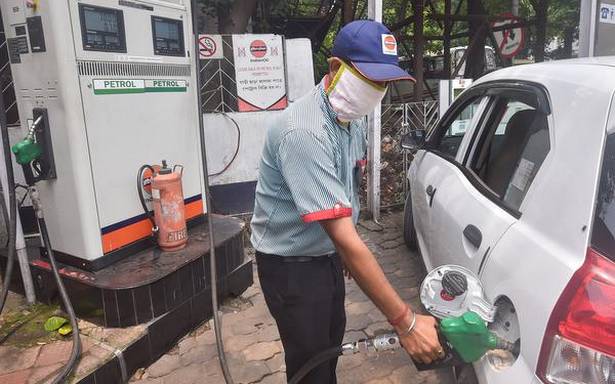 Diesel price on Thursday was cut by 20 paise per litre – the second straight day of reduction, but petrol rates remained unchanged.

Diesel price in Delhi was reduced to ₹89.47 per litre from ₹89.67 a litre, according to a price notification by state-run oil companies.

The reduction comes on the back of a similar cut on Wednesday.

Just like on Wednesday, the petrol price wasn’t revised on Thursday. In Delhi, petrol continued to be priced at ₹101.84 a litre.

The price cut follows international oil prices tumbling to their lowest level since May after the U.S. Federal Reserve signalled it was set to start tapering asset purchases within months, hurting commodities and lifting the dollar.

India is near 85% dependent on imports to meet its oil needs and so benchmarks local fuel rates to international oil prices.

Wednesday’s reduction in diesel rates came after 33 days of status quo in rates as oil companies followed what is known as moderation policy which calls for not passing on extreme volatility in rates to consumers.

Incidentally, this status quo coincided with the Parliament session where the opposition parties tried to corner the government on various issues including the hike in fuel prices.

Petrol and diesel price was last hiked on July 17.

Prior to that, the petrol price was increased by ₹11.44 a litre between May 4 and July 17. Diesel rates had gone up by ₹9.14 during this period.

The price hike during this period pushed petrol prices above ₹100-a-litre-mark in more than half of the country while diesel crossed that levels in at least three states.