Shares of Apple Inc. bounced Tuesday, but nowhere near enough to wipe away the technical damage done in the previous session that helped flip the chart’s near-term signal to bearish from bullish.

The stock AAPL, +1.58% surged 1.6% in Tuesday trade, amid a broad stock-market rally after President Donald Trump made his usual upbeat comments on the outlook for the U.S.-China trade war. See Market Snapshot.

But the gain followed a 5.8% drubbing on Monday, and a 12.2% tumble over the past six days, as fears of an escalation in the trade war became reality. In comparison, the Dow Jones Industrial Average DJIA, +0.82% , of which Apple is a component, slid 617 points Monday, or 2.4%, and lost 4.7% the previous six sessions.

Wedbush analyst Dan Ives said Apple has become the “poster child” for the U.S.-China trade battle in the eyes of investors, given fears that the latest tariffs could “significantly increase the cost of iPhones globally” and have a major negative impact on demand and earnings expectations.

On the way down, the stock broke through some key chart levels that had supported a sharp rally over the past four months. 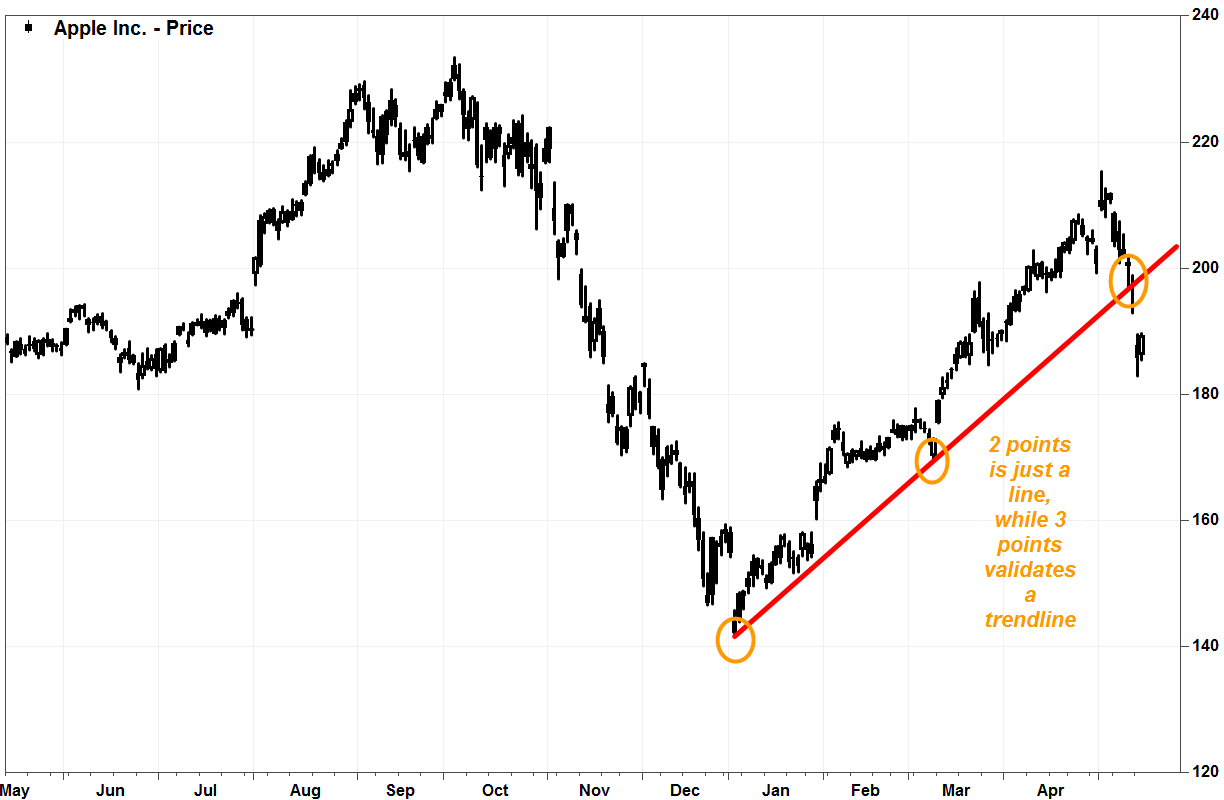 The second key level was the 50-day moving average (DMA), which many chart watchers use as a guide to the short-term trend. The third was the widely followed 200-DMA, which is viewed as a dividing line between longer-term uptrends and downtrends.

In the process, the selloff became an official correction, which many on Wall Street define as a decline of at least 10%, to up to 20%, from a bull-market peak. A bull market is a gain of at least 20% off a bear-market trough. 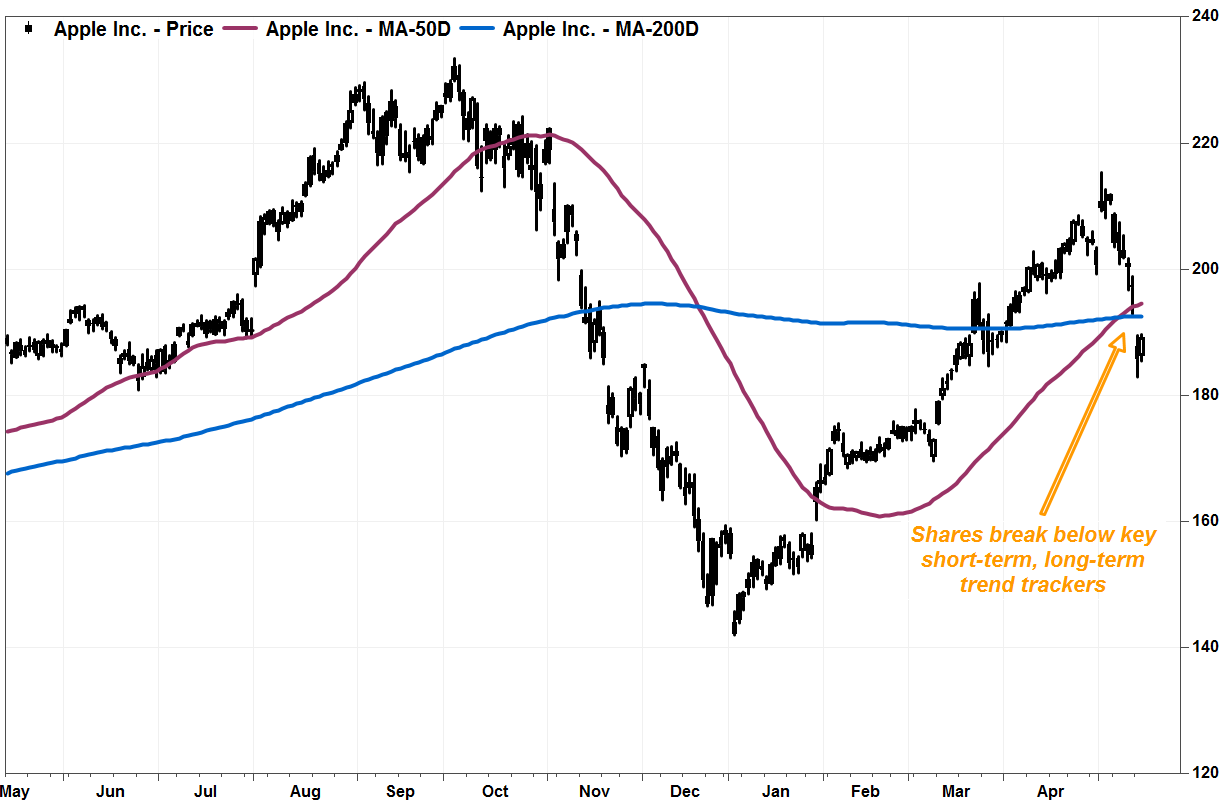 Analyst Wamsi Mohan at Bank of America Merrill Lynch didn’t seem too concerned with the technical breakdown, or the U.S.-China trade dispute, as he said he views the recent pullback as “a particularly attractive buying opportunity.” He reiterated his buy rating and $230 stock price target on the stock.

Keep in mind, however, that a basic tenet for chart watchers is that a trend remains in place until there are definite signs that it has reversed. So until the stock can get back above the key uptrend-tracking lines, many may refer to the lackluster recovery in price as a bearish “dead-cat bounce.”

The idea being that after a sharp selloff, there is often a snapback rally that retraces a chunk of the previous decline. For Fibonacci ratio followers, that retracement could be as much as 38% to 62% of the price loss. The lack of a meaningful bounce — dead cats don’t bounce — suggests selling pressure remains strong, which would suggest a resumption of the selloff in short order.

The 200-DMA line currently extends to $192.46, according to FactSet, while the 50-DMA line comes in at $194.54. The previous uptrend line climbed to just below $200 on Monday, and is rising at an angle of about 40 degrees. Read more about the Fibonacci ratio in this Slide Show (slide 5).

For levels to watch on the downside, there is potential for support in the $173.00 to $175.50 range, where there is a gap in the charts between the March 8 intraday high and the March 11 intraday low. 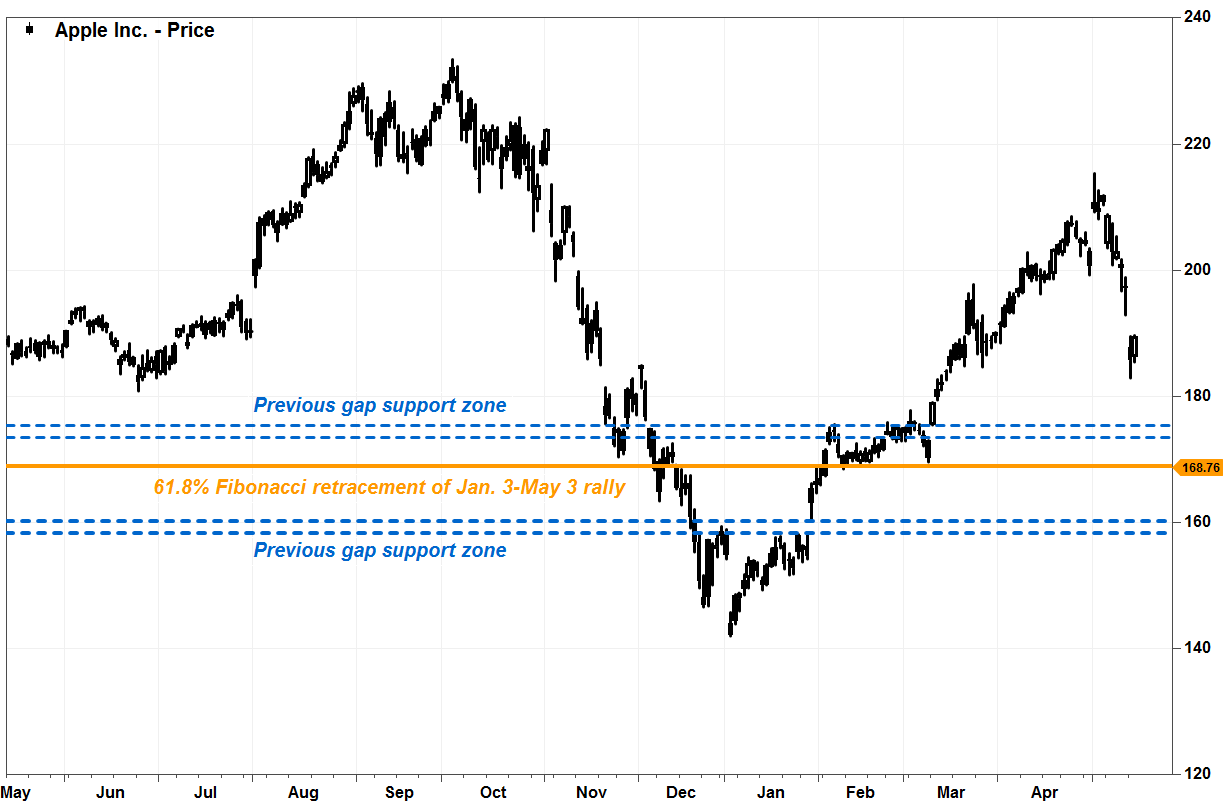 A 61.8% retracement of the Jan. 3-to-May 3 bull market rally comes in at $168.76. Fibonacci followers would say a retracement of over 61.8% indicates that a new independent trend has started. The downside target then becomes a full retracement, or $142.19.

Get the top tech stories of the day delivered to your inbox. Subscribe to MarketWatch's free Tech Daily newsletter. Sign up here.

14/05/2019 Industries Comments Off on Apple’s stock bounces, but not enough to wipe away bearish chart signals
World News

Who needs native exchange tokens in 2020?

Cardano and Ethereum Price Surge Alongside Bitcoin — Will XLM Follow?

Analysts Foresee a Harsh End to Bitcoin’s Uptrend if It Losses $9,350

HBO Max So Far Merits A Grade Of C+ As “An Opportunity Lost,” Analysts Say