Ripple’s XRP token could hit $1 in the coming days, according to a classic technical chart setup.

Dubbed a “double bottom,” the trend reversal indicator appears after the price bottoms out at a level, rebounds toward a higher resistance level, and then pulls back to or near the first bottom level — only to rebound again to the previous resistance line (also called the “neckline”).

Should the price close above the neckline, an extended move upward is anticipated, the length of which equals the total height between the neckline and the bottom level. It appears that XRP is closer to executing the pattern entirely, as shown in the chart below. 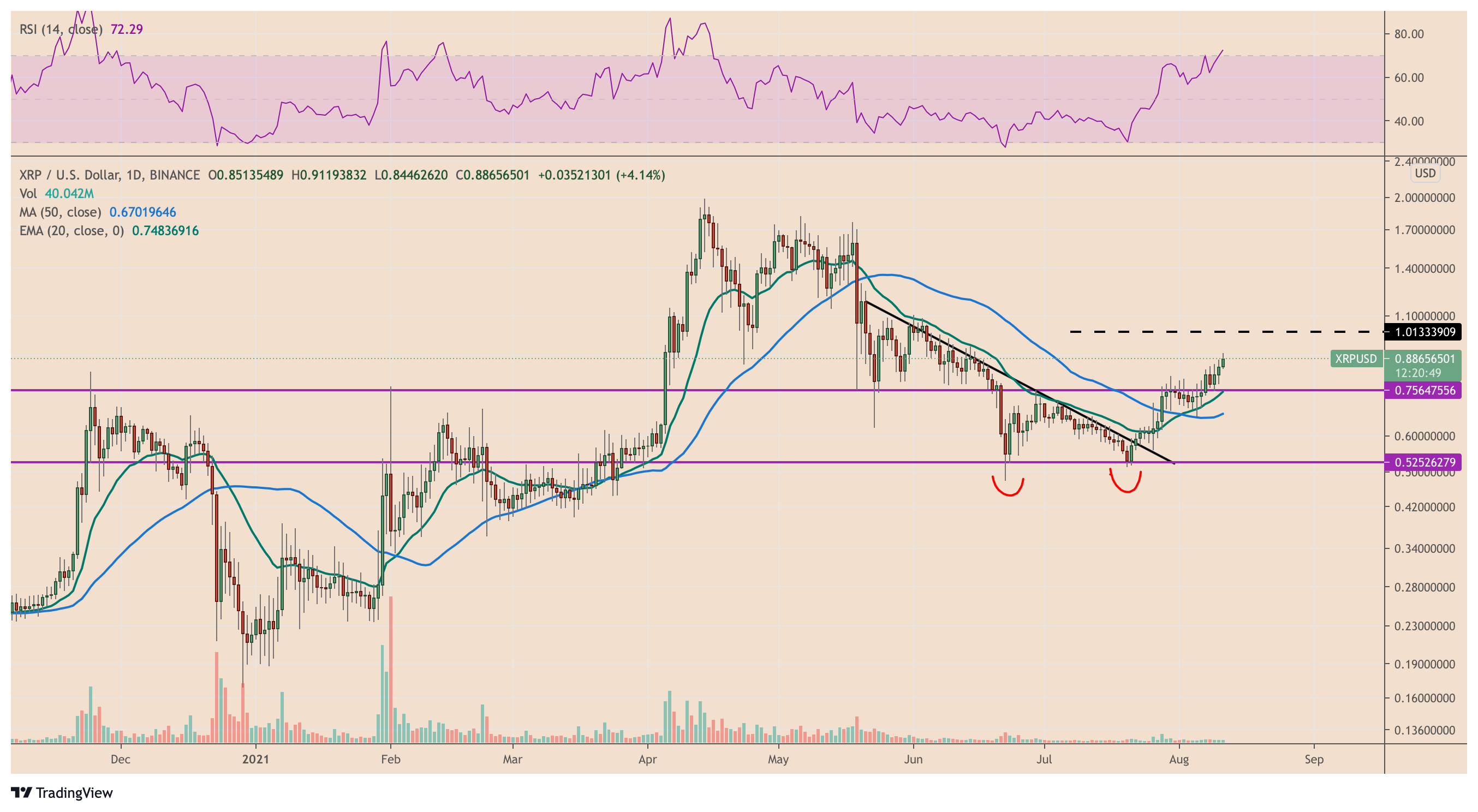 XRP/USD formed the first bottom at $0.65 on June 22 and rebounded toward its neckline resistance at $0.75. It fell again to log the second bottom level at $0.51, followed by another retracement toward the $0.75 resistance and a subsequent breakout.

In other words, XRP has a decent chance to test $1 as its double bottom pattern’s profit target.

In fact, research conducted by Samurai Trading Academy shows that double bottoms have a 78.55% success rate.

On the flip side, XRP’s daily relative strength indicator (RSI) alerted about its interim excessive valuations. At 72.29, the RSI reading was two points into the overbought region, hinting at an imminent sell-off period ahead.

A majority of its gains came in the wake of a marketwide upside rally, led by the euphoria surrounding Ethereum’s milestone software update.

The ETH/USD exchange rate surged 89.13% to $3,235 after bottoming out on the same date as XRP, July 20, at $1,718.41. As a result, it appears XRP merely tailed the crypto market trend, thanks to its 0.69 positive correlation efficiency with Ether (ETH), as per the 30-day average data collected by CryptoWatch.

In the latest series of events, the United States Securities and Exchange Commission (SEC) failed to turn up internal documents despite two orders from Judge Sarah Netburn on request from the defendant, Ripple Labs.

Ripple Labs filed a motion in early June to compel the SEC to turn over its internal communications regarding XRP’s rival cryptocurrencies Bitcoin (BTC) and Ether. Netburn approved the motion, but the SEC did not deliver a single document.

Financial Feeds noted that Netburn can order monetary sanctions against the SEC for not complying with a court order. More so, she can even dismiss the U.S. securities regulator’s case against Ripple Labs should the former remain uncooperative.

Meanwhile, SEC Chairman Gary Gensler asserted in his response to Senator Elizabeth Warren that its means to determine whether a crypto asset is a security or not is clear, adding that:

“The SEC has taken and will continue to take our authorities as far as they go. […] We haven’t yet lost a case.”

The SEC vs. Ripple lawsuit, which started in December 2020, damaged XRP’s investment prospects. XRP’s value fell by almost 80% in a month (to $0.168). It also faced delisting across regulated exchanges, including Coinbase, Bitstamp, Crypto.com, OKCoin, Wirex and others.