In hindsight, February can be viewed as a watershed moment in the history of Bitcoin. The entire month could be looked back upon by market specialists and economists, as the markets saw an enormous surge before correcting themselves later in the month.

In February, Bitcoin’s price was a bit of a rollercoaster, almost drawing a bell curve of sorts. At the start of the month, BTC was trading at $32,889, gradually rising to an all-time high of $58,352 on Feb. 21 before flash crashing to around the $43,700 range toward the end of the month.

So, what’s behind this meteoric rise and subsequent pullback that now leave many in the community questioning if the crypto bull run is still ongoing?

“The weeks where decades happened”

Bitcoin has seen institutional involvement in the asset increasing since 2020 ended. In February, one of the oldest banks in the world, BNY Mellon, stepped into crypto as a custodian. Considering the size and legacy of such banking institutions, it says a lot about where Bitcoin has reached in its maturity from the old-timer perspectives of the likes of Warren Buffet, who has called the asset a worthless “delusion” and even ” rat poison squared,” indicating how strong his stance against Bitcoin is.

In fact, such perspectives are often subject to change. The latest naysayer to have now become an investor is Kevin O’Leary, the Shark Tank star, who will now allocate 3% of his portfolio to Bitcoin. He also implied that every company he is invested in is considering putting Bitcoin on its balance sheet. In the past, he has referred to cryptocurrencies as a “crypto trap” and Bitcoin’s value to be a “giant nothing burger.”

On these changing perspectives, Shane Ai, who is responsible for product research and development of crypto derivatives at Bybit — a cryptocurrency derivatives exchange — told Cointelegraph:

“The month of February saw a slew of bullish news, from Tesla, MicroStrategy, Square, and BlackRock adding BTC to their balance sheets, to BNY Mellon, Deutsche Bank, and Mastercard embracing Bitcoin. The Bitcoin rally to $58,352 was a proportional response to the weeks where decades happened.”

Besides BNY Mellon and Deutsche Bank, tier-one investment banks like Goldman Sachs and Citigroup have recently taken a stance on Bitcoin. Goldman Sachs announced that it would be restarting its cryptocurrency desk, which it had shut down in December 2017. Veteran trader Peter Brandt took to Twitter to claim that “it is time to guard your money” when Goldman Sachs steps into a niche market.

A Citigroup report stated that Bitcoin is currently at its “tipping point” of either becoming the preferred currency for international trade or seeing a “speculative implosion.” The report says that the involvement of Tesla and MasterCard is proving to be the beginning of a transformation toward going mainstream.

Among the various institutions that are now flocking to the cryptocurrency markets, Tesla is probably the most prominent and the one that has most marked the paradigm shift due to the influence of its CEO, Elon Musk, on the crypto markets.

Now, his impact on the markets is often referred to as the “Musk effect.” On Feb. 8, Tesla announced its purchase of Bitcoin worth $1.5 billion at the time as a treasury asset on its balance sheet. The move sent Bitcoin’s price soaring, posting a price surge of $10,000 within a week. Just two weeks later on Feb. 21, Bitcoin reached its all-time high.

Apart from the obvious institutional interest, flaws and insecurities from the global economy and traditional financial markets also seem to overflow into the Bitcoin markets. Ai further opined: “Bitcoin is a highly reflexive asset — the viability of it being a corporate reserve asset increases alongside its market capitalization.” He further added: “In a world starved of yield, financial institutions are naturally converging on crypto — which still offers superior, liquid returns relative to Traditional Finance.”

The evidence that the recent asset movement in the cryptocurrency markets is institutionally driven is revealed by analyzing The TIE’s proprietary NVTweet Ratio, which compares a cryptocurrency’s social conversation with its market capitalization. The ratio looks at how many tweets a particular coin has per each $1 million in market cap.

A rapidly increasing NVTweet Ratio suggests that a certain coin’s market is becoming institutionally driven. If a coin’s market capitalization is rising faster than social volume, this may suggest less retail involvement in the market for a particular coin. When observing the NVTweet Ratio when Bitcoin’s price passes major support levels like $20,000 and $40,000, it is evident that the ratio surges rapidly, pointing to disproportionately less social interest despite an aggressively increasing market capitalization. 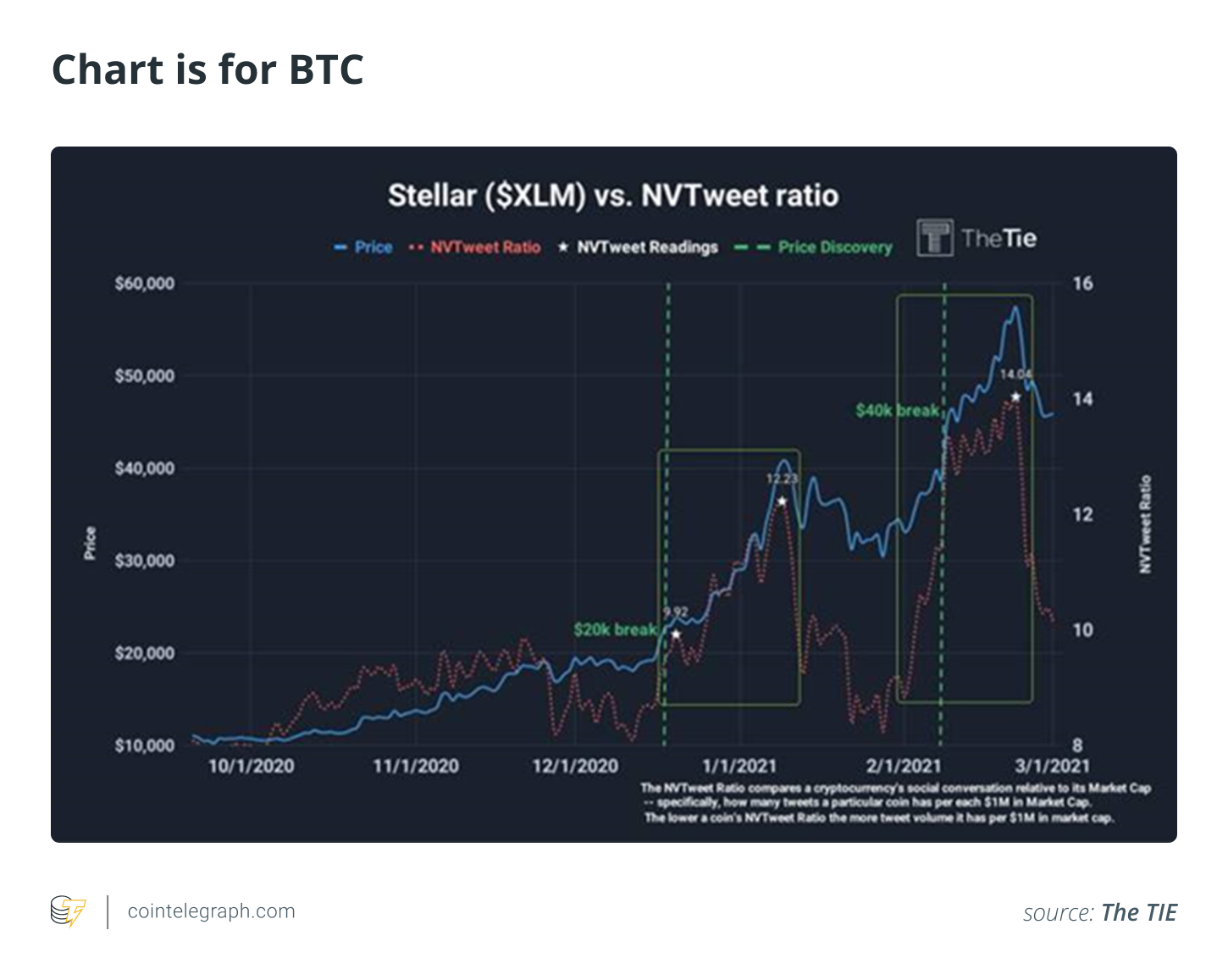 As a byproduct of the rise in institutional involvement, millions of new retail investors have also been lured into the cryptocurrency markets due to the gains offered in the recent timelines and the hype surrounding it.

Joshua Frank, CEO of The TIE, pointed out further evidence to Cointelegraph: “From a retail lens, we have seen Bitcoin’s tweet volume continue to soar for the most extended period of time that we have ever witnessed.”

This continuous rise in tweet volumes regarding Bitcoin is driven mainly by all the landmark events that Bitcoin witnessed in the month of February, such as its all-time high and its market capitalization smashing the $1 trillion mark. 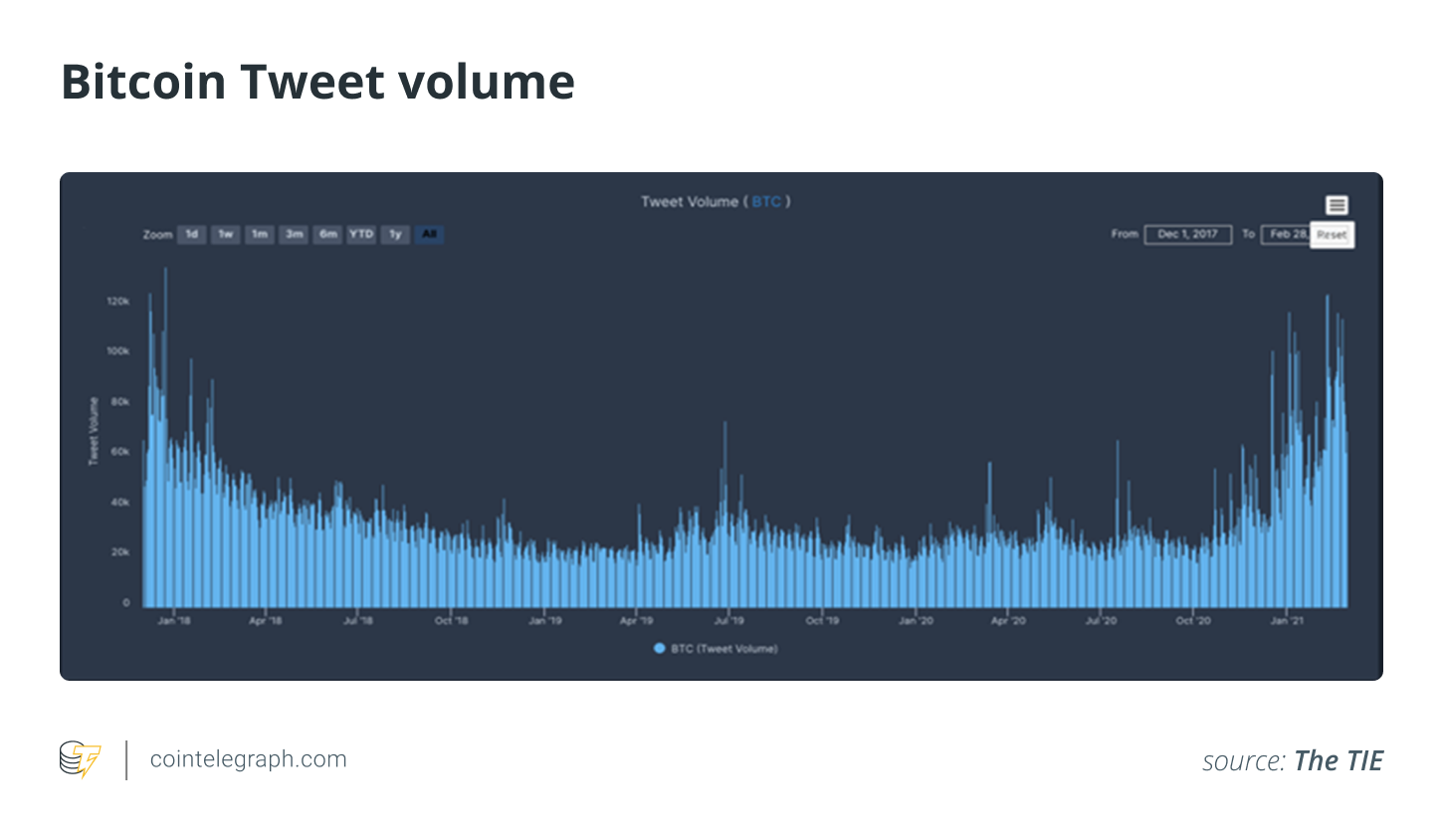 Cointelegraph discussed with Marie Tatibouet, the chief marketing officer of cryptocurrency exchange Gate.io, the question of whether this is the right moment for retail investors to jump into Bitcoin despite the prices being much higher than just a year ago. She opined:

“It is the best time possible since this bull run is unprecedented due to the parties involved. […] These investors are not going to let BTC go through catastrophic drops. Also, keep in mind that not only are we in the early stages when it comes to overall adoption, but we are also in the early stages of this bull cycle.”

Despite the fact that prices might seem high, the retail investors don’t seem to be deterred by this at all. In Robinhood’s recent report “Crypto Goes Mainstream,” the company revealed that there were over 6 million new crypto users who registered on its platform. January had more than 3 million new users, while February had more than 2.9 million new users as of Feb. 25. This is a significant increase compared with 2020 when Robinhood had only 200,000 average monthly new crypto traders.

The report also pointed out that the average transaction size on the platform in 2021 is $500, a 100% increase when compared with the first three quarters of 2020. Tatibouet further elaborated that Bitcoin is seen as a lucrative investment proposition for retail investors due to its impressive gains over the past year: “Bitcoin has outperformed every single asset class, and that too by a significant amount. At one point, it was outperforming Nasdaq 100 by 300% and S&P 500 by almost 1600%.”

While Bitcoin witnessed the initial price breakout beyond the $40,000 mark in January, February proved to be the month when most of the groundbreaking news came out, which led the price of Bitcoin to its all-time high. Furthermore, if Bitcoin avoids a big price correction like the one seen almost a year ago on March 12, 2020, BTC could post its most impressive quarter in recent history.