The wider cryptocurrency market is showing signs of strength on Sept. 6 as Bitcoin (BTC) bulls battle for control at the $51,500 level.

Altcoins have benefited from Bitcoin’s strong showing, with many seeing gains in excess of 20%, and the Altseason Indicator from Cointelegraph Markets Pro continues to signal that market conditions are tilted toward further gains for altcoins. 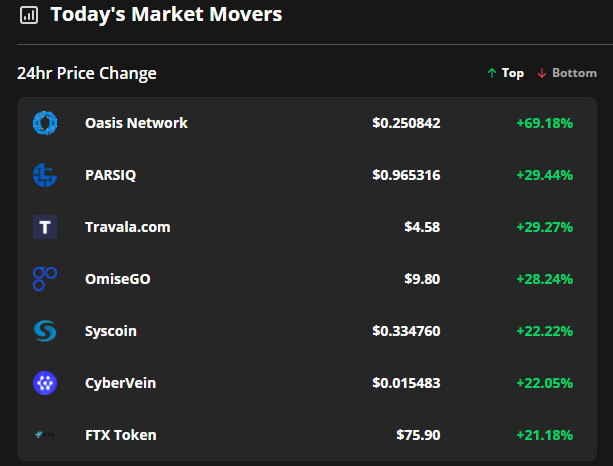 Data from Cointelegraph Markets Pro and TradingView shows that the biggest gainers over the past 24 hours were Oasis Network’s ROSE, Parsiq’s PRQ and Travala’s AVA.

Oasis Network is a blockchain protocol with privacy-enhancing features that create a secure platform for open finance and responsible data management.

VORTECS(TM) Score data from Cointelegraph Markets Pro began to detect a bullish outlook for ROSE on Sept. 1, prior to the recent price rise. 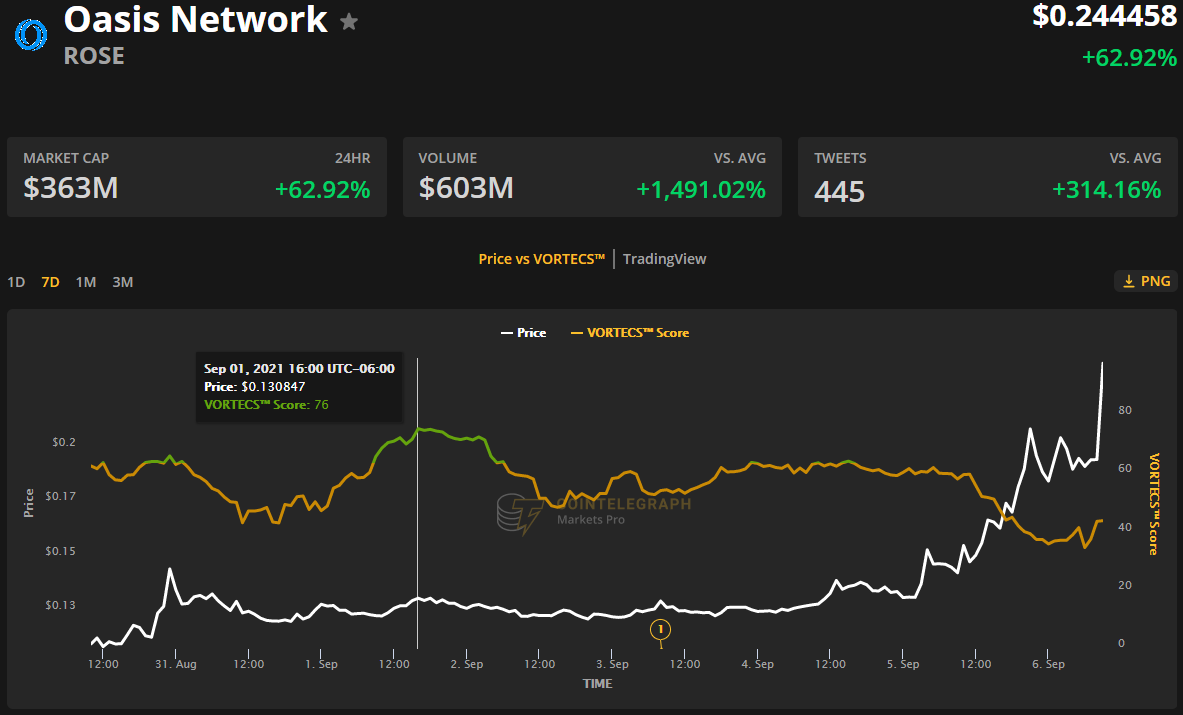 As seen in the chart above, the VORTECS(TM) Score for ROSE climbed into the green on Sept. 1 and reached a high of 76, around 82 hours before its price surged 135% over the next two days.

The sudden rise in the price of ROSE comes following the Sept. 3 announcement that the project has partnered with API3 and will be co-sponsoring a grant program for development teams wishing to build a Rust version of the protocol’s Airnode service.

Parsiq, a blockchain-based analytics platform, saw the price of its PRQ token rally 51% over the past 24 hours.

VORTECS(TM) Score data from Cointelegraph Markets Pro began to detect a bullish outlook for PRQ on Sept. 5, prior to the recent price rise. 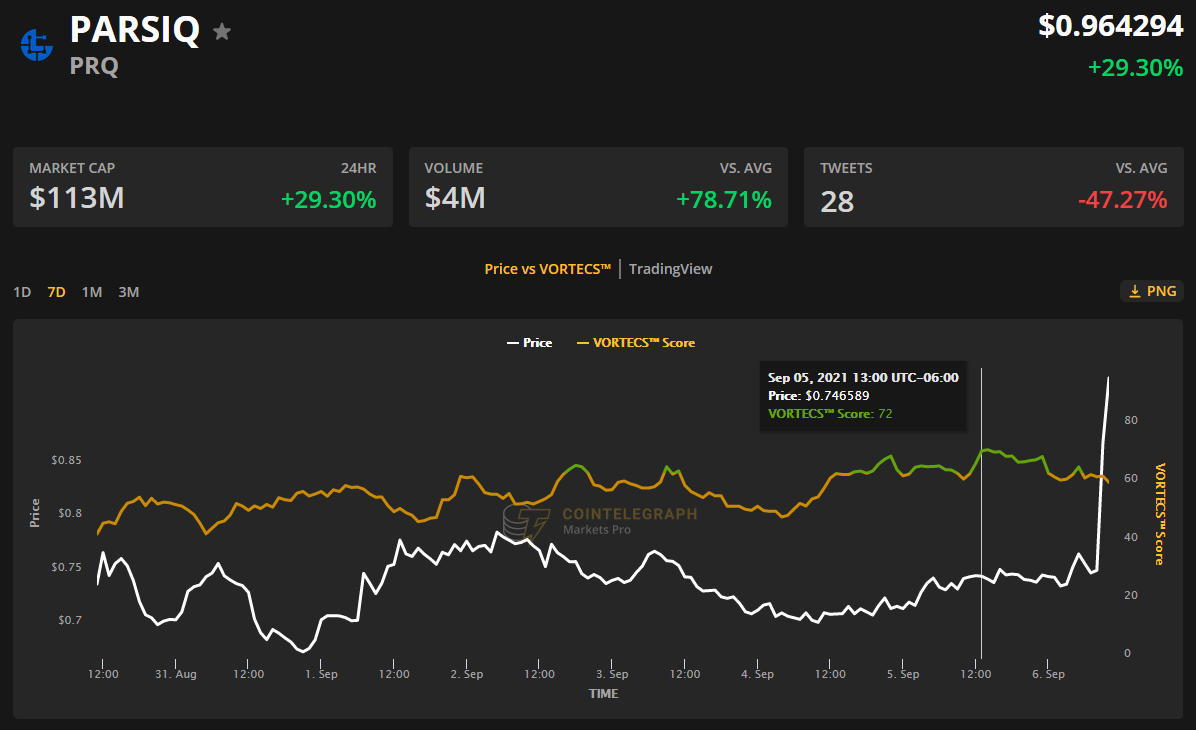 As seen in the chart above, the VORTECS(TM) Score for PRQ climbed into the green on Sept. 5 and reached a high of 72 roughly 12 hours before its price spiked 52% over the next day.

This growing momentum for Parsiq comes following the introduction of its new subscription model that makes the protocol the world’s first decentralized software as a service (SaaS).

End of summer push for Travala

Travala is a leading blockchain-based travel booking platform that offers flights and accommodation services to more than 90,000 destinations in 230 countries and territories around the world.

VORTECS(TM) Score data from Cointelegraph Markets Pro began to detect a bullish outlook for AVA on Sept. 1, prior to the recent price rise. 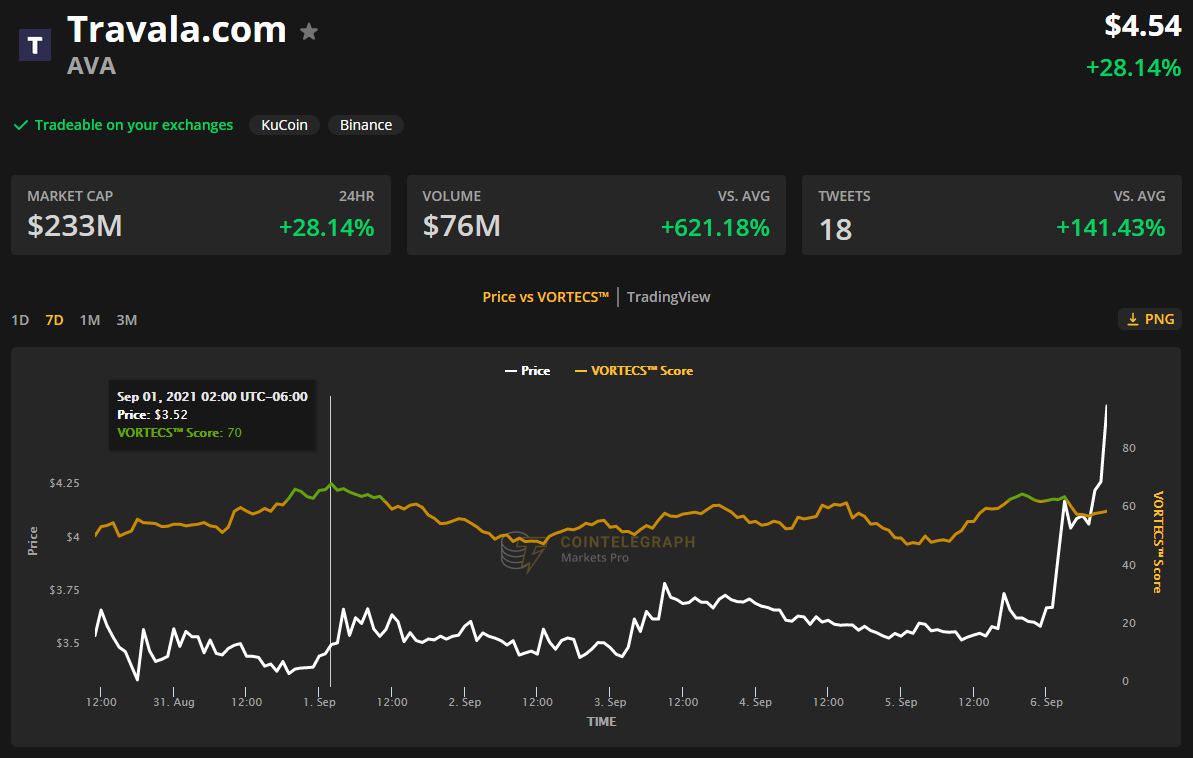 As seen in the chart above, the VORTECS(TM) Score for AVA reached a high of 70 on Sept. 5, around 120 hours before its price spiked 54% over the next day.

The spike in price comes as the project has been making its end-of-summer push to engage users, and the project also allows users to spend stablecoins such as USD Coin (USDC) or Dai to book their next vacation.