A new report predicts Tether could surpass Ether’s market cap by the end of next year, paving the way to mainstream adoption of stablecoins and central bank digital currencies (CBDCs).

According to Bloomberg’s Crypto Outlook report for Q4 2020 written by Senior Commodity Strategist Mike McGlone, Tether (USDT) is likely to take the number two position by market capitalization from Ether (ETH) in 2021. The report cited the “stagnant market cap” of ETH, which currently stands at $43.2 billion but remained under $30 billion for most of 2019 and 2020, before getting a boost from DeFi in late July.

USDT’s market cap, on the other hand, has seen steady growth since 2017, with just one significant dip in October 2018. The stablecoin began 2020 with a market capitalization of $4.1 billion, “rapidly rising” to $15.7 billion in October. 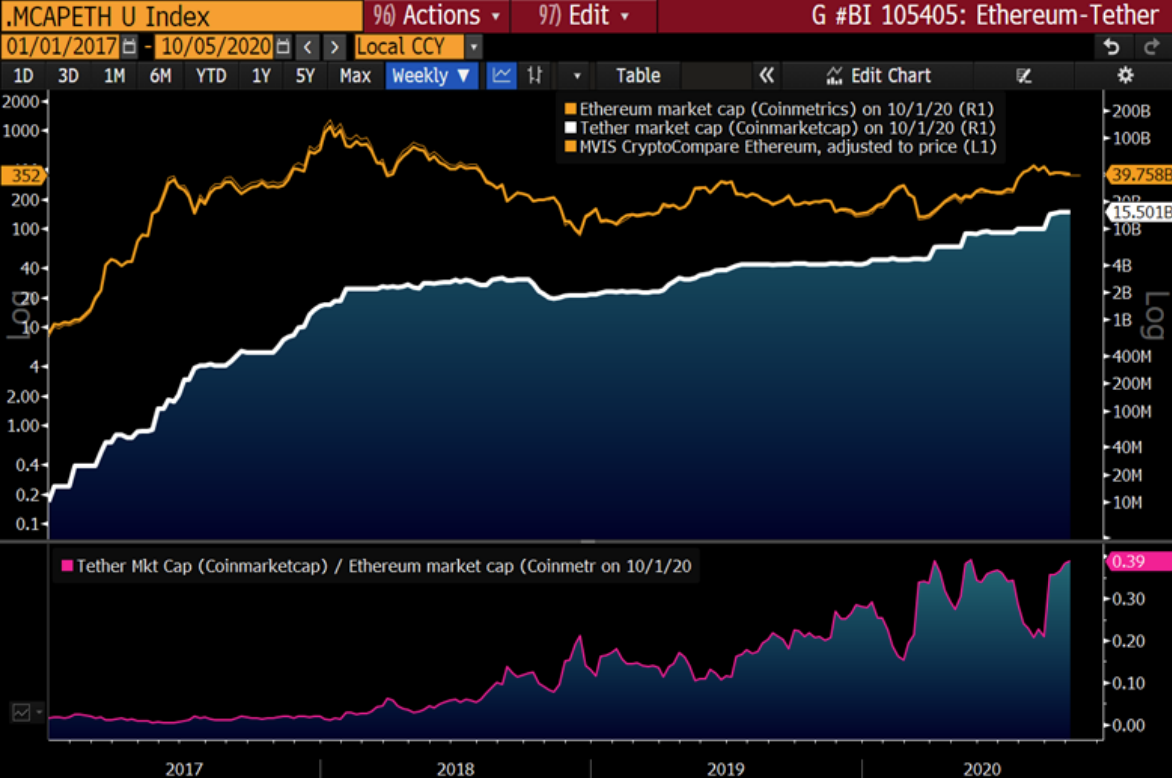 “It should take something significant to stall the increasing adoption of Tether,” McGlone stated. “If current trends prevail, the market cap of Tether may surpass Ethereum next year.”

Not everyone in the crypto community will appreciate the prediction. Crypto pioneer Adam Back told his 211,500 Twitter followers on Oct. 11 that Bitcoin (BTC) is “the only benchmark that matters” as he believes the majority of investor portfolios are denominated in the cryptocurrency.

“I use stablecoins, but I don’t hold them much as that’s short Bitcoin,” said Back. “Any strategy that doesn’t involve holding Bitcoin is at high risk of underperforming Bitcoin.”

Though the report suggests the demand for Tether indicates that the arrival of central bank digital currencies (CBDCs) is simply “a matter of time,” it also predicts a bullish future for Bitcoin.

“Bitcoin could continue doing what it has for most of its nascent existence, appreciating in price on the back of increasing adoption, but at a slower pace,” the report stated.

“Most demand and adoption measures indicate Bitcoin is more likely to stay on its upward path.”

Trump and the coup that failed: Maria Bartiromo, James Freeman 'The Cost'

'We are going in the wrong direction': Fauci predicts that Americans will not see 'semblances of normality' until 2022 amid the coronavirus pandemic