Bitcoin (BTC) and Ether (ETH) recovered a large part of the losses that happened due to the knee-jerk reaction to China’s regulatory crackdown on Sept. 24. This suggests that crypto markets have absorbed the news-based selling, with long-term investors likely using the dip to accumulate.

However, a rally may have to wait as market participants watch the outcome of the infrastructure bill this week, which could see the debate start on Sept. 27 and the final vote on Sept. 30. The broad definition of a “broker” may cause some volatility in crypto markets but HODLers are unlikely to be shaken. 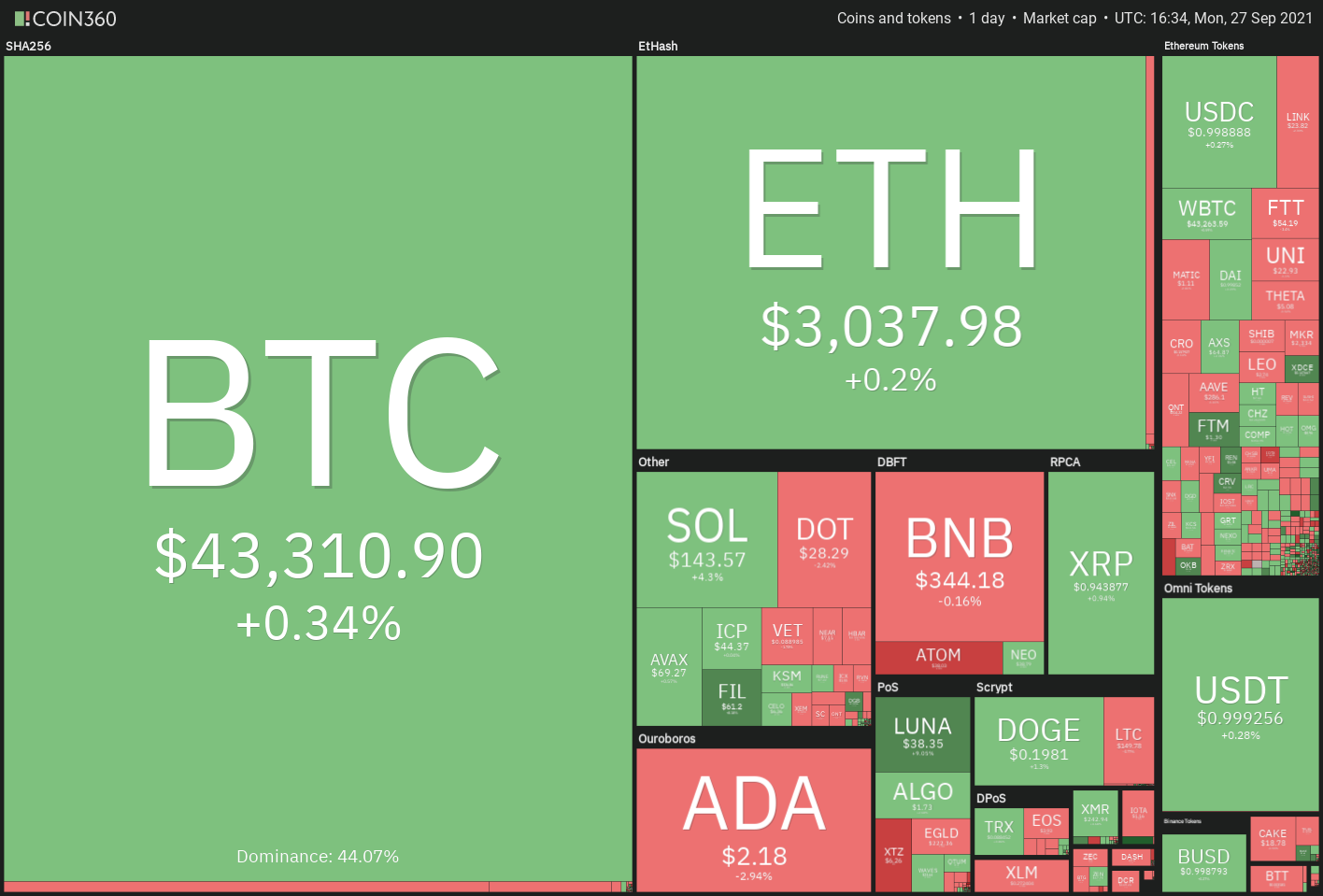 Analyst Willy Woo said that “Bitcoin has entered the Never Gonna Give You Up phase of the Astley Cycle,” which could be followed by a rally.

On one side are the “Rick Astley” investors and on the other end of the spectrum is JPMorgan CEO Jamie Dimon who remains steadfast in his criticism of Bitcoin. In an interview with The Times of India, Dimon said that he won’t buy Bitcoin even if it rises “10 times in price in the next five years.”

Could Bitcoin extend its recovery in the next few days or is a range-bound action likely? Let’s analyze the charts of the top 10 cryptocurrencies to find out.

Bitcoin has been oscillating between the 100-day simple moving average (SMA) ($41,078) and the 20-day exponential moving average (EMA) ($44,982) for the past few days, indicating that bulls are buying on dips while bears are selling on rallies. 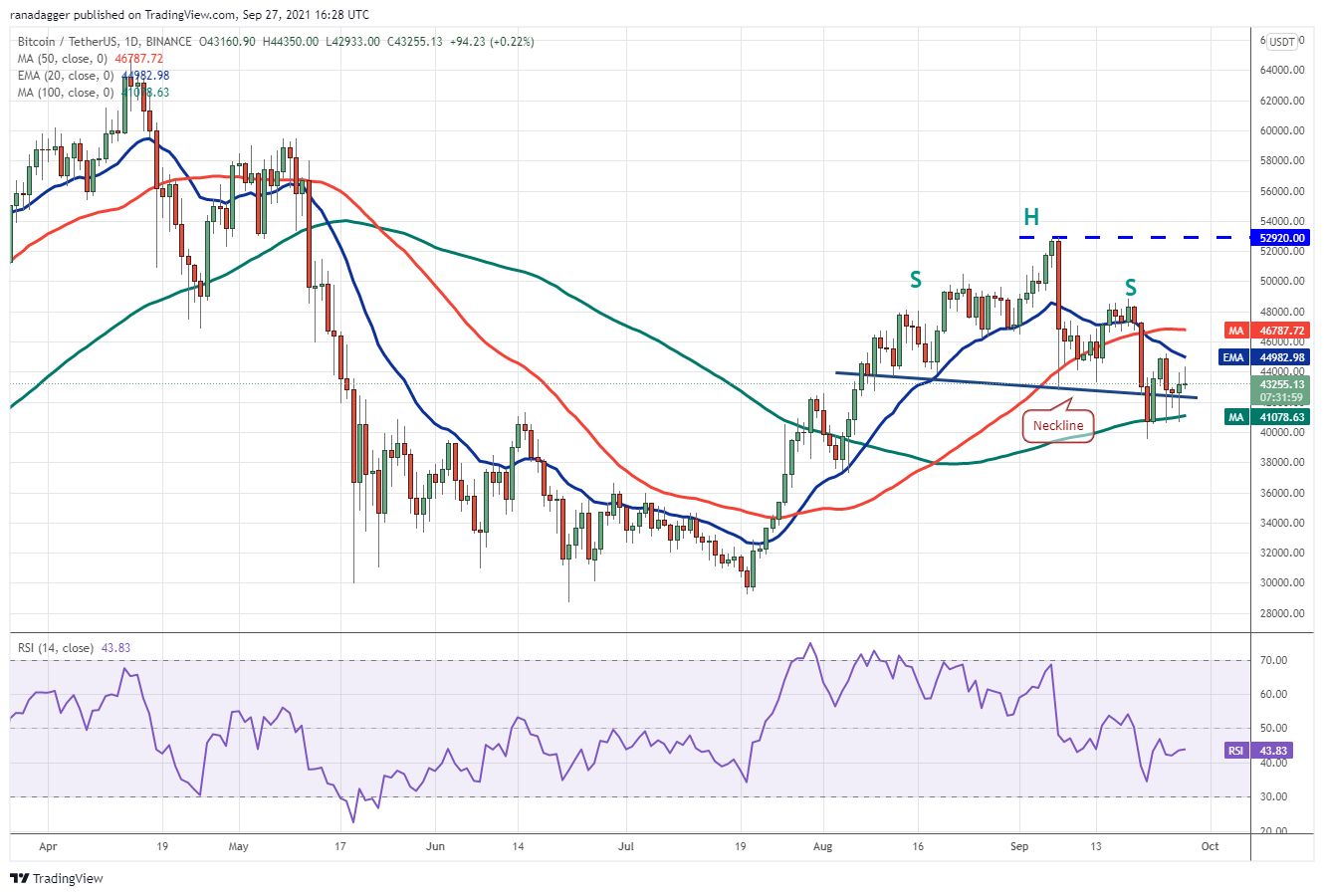 The downsloping 20-day EMA and the relative strength index (RSI) just below the midpoint suggest that the path of least resistance is to the downside. If bears sink and sustain the price below the 100-day SMA, the selling could intensify.

This bearish view will invalidate if the price turns up from the current level and breaks above the moving averages. Such a move will suggest that the bulls are back in the game. The pair could then rally to $48,843.20 and later to $52,920.

The long tail on Ether’s candlesticks of the past three days shows that bulls are buying aggressively near the 100-day SMA ($2,756). Hence, this becomes an important level to watch out for. 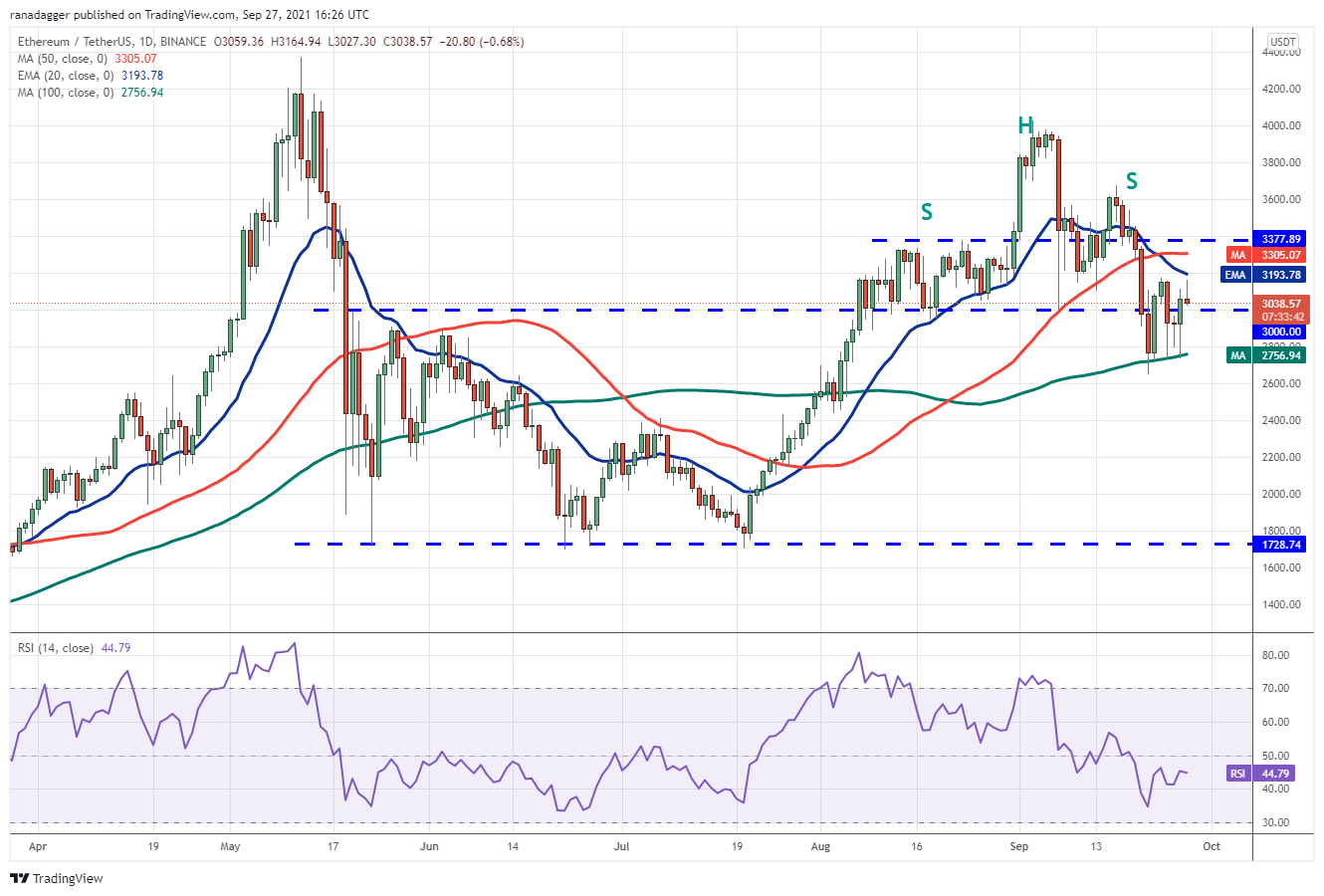 The 20-day EMA ($3,193) is sloping down and the RSI is just below the midpoint, indicating that bears have a slight edge. If the price turns down from the current level, the ETH/USDT pair could consolidate between the moving averages for a few more days.

The bulls pushed Cardano (ADA) above the moving averages on Sept. 25 but they could not clear the hurdle at $2.47. This suggests that bears have not given up and are selling on rallies to overhead resistance levels. 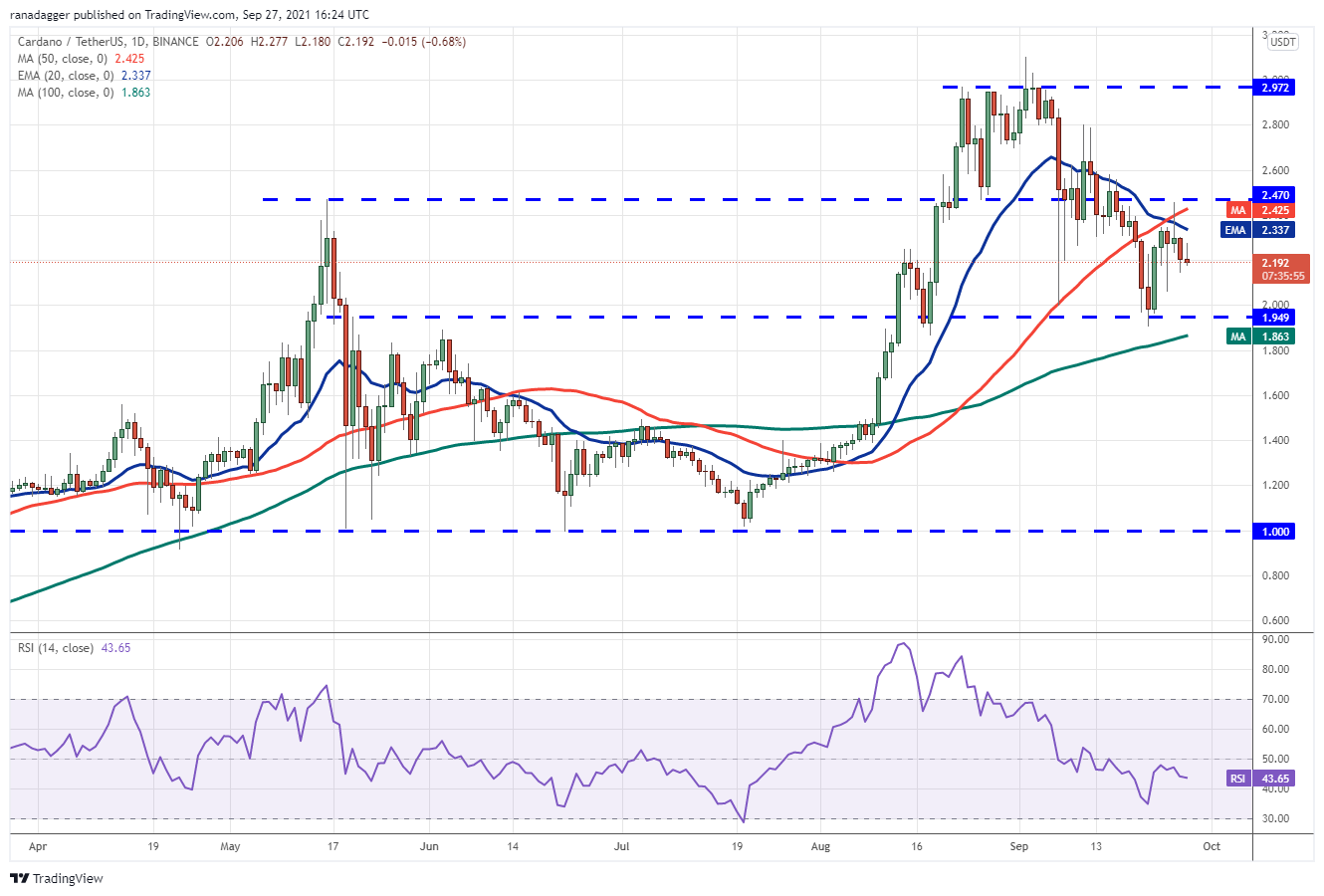 The ADA/USDT pair has turned down and the bears will now try to sink the price to the critical support at $1.94. This is an important level for the bulls to defend because if it cracks, the pair could start a downtrend.

On the contrary, if the price turns up from the current level or rebounds off $1.94, the bulls will again try to propel the pair above $2.47. If they manage to do that, it will indicate that the correction could be over. The pair could then rally to $2.97.

Binance Coin (BNB) dipped below the support at $340 on Sept. 26, but the bulls bought the dip and held the level on a closing basis. The buyers are currently struggling to sustain the price above $340, indicating selling on minor rallies. 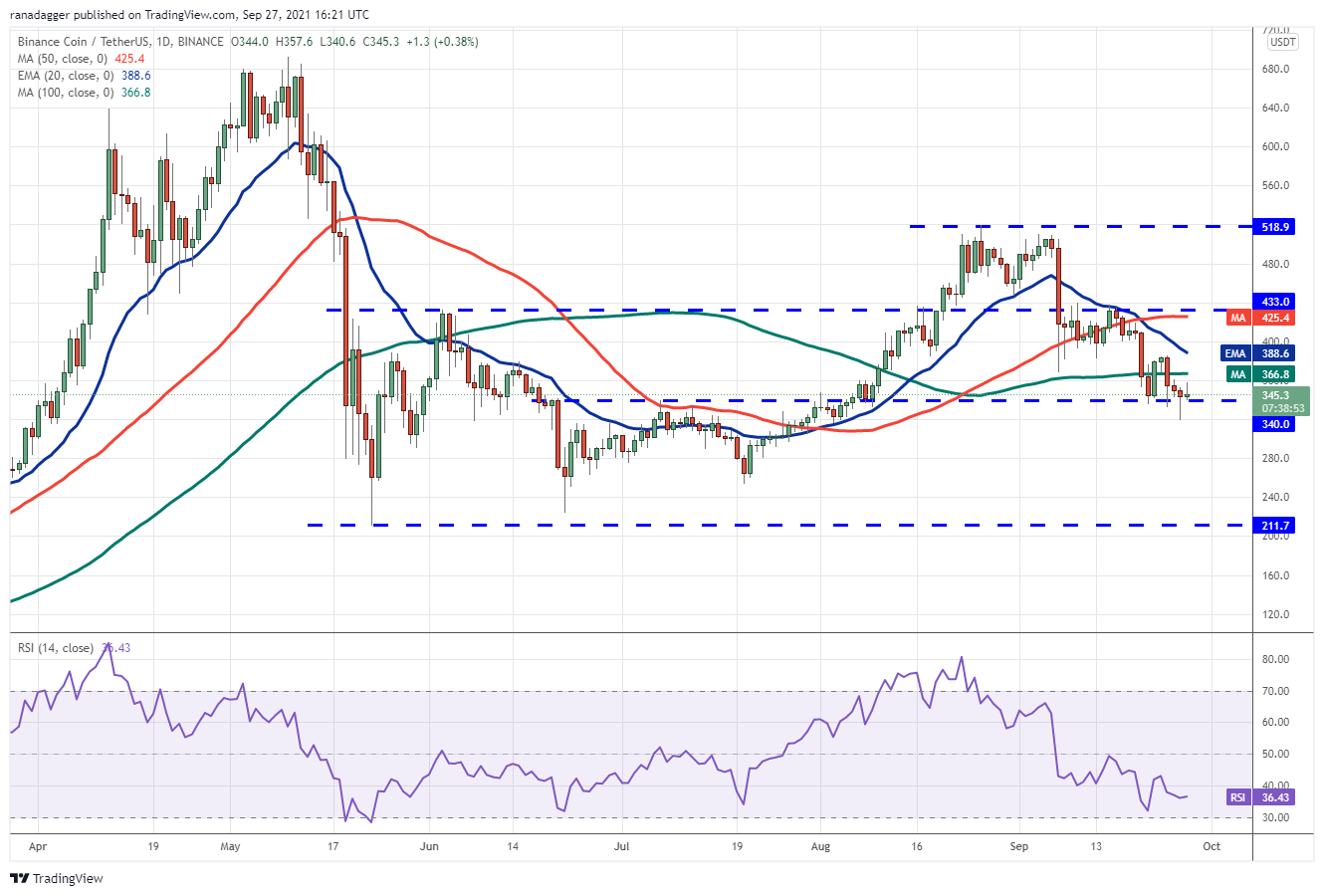 The first sign of strength will be a break and close above the 20-day EMA. Such a move will suggest that the selling pressure is reducing. The pair could then rally to the overhead resistance at $433.

Ripple (XRP) has repeatedly bounced off the 100-day SMA ($0.88) in the past few days, indicating that bulls are aggressively defending the support. The bulls will now try to push the price above the overhead resistance zone between the 20-day EMA ($1.02) and the 50-day SMA ($1.10). 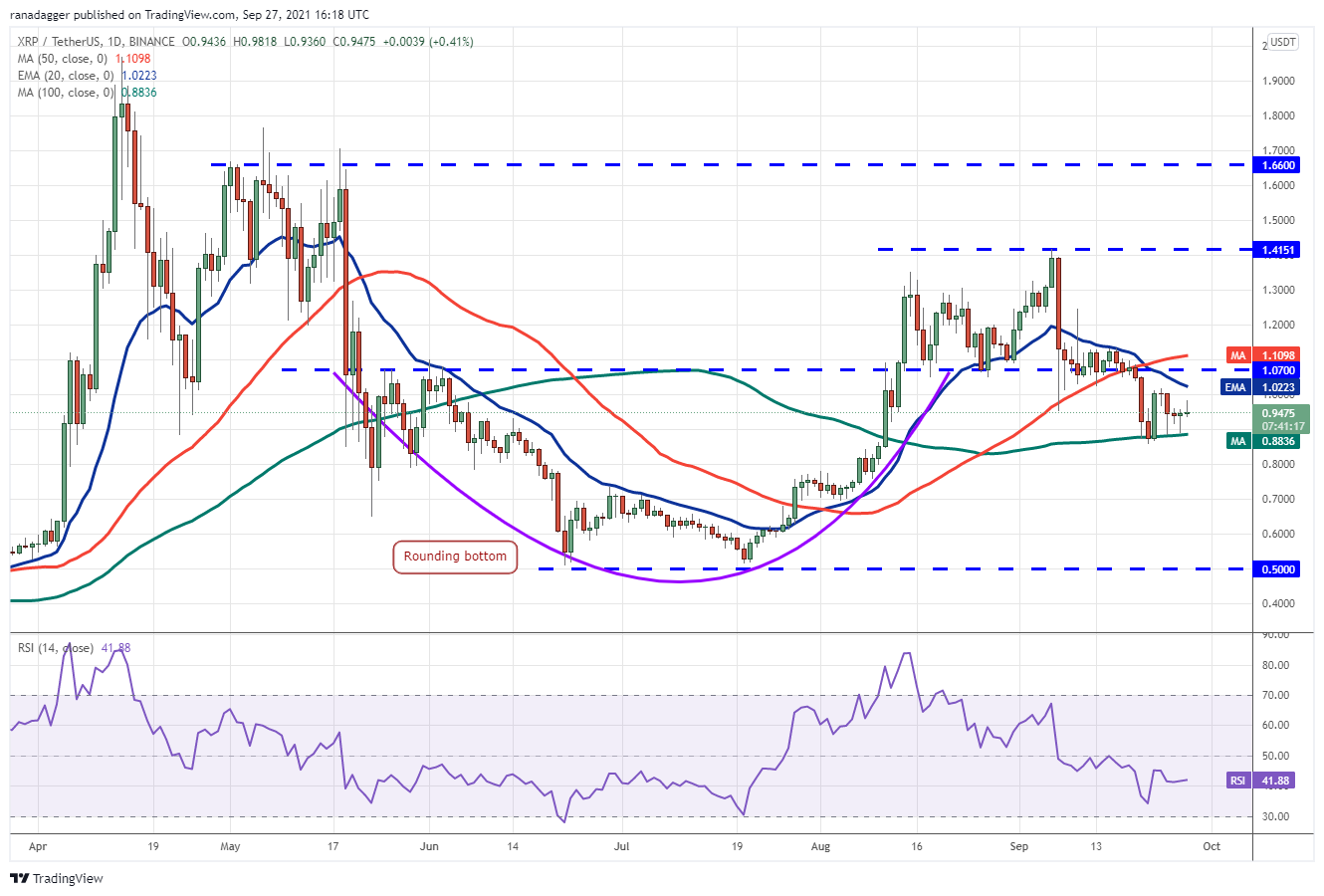 If they manage to do that, it will suggest that the correction could be over. The XRP/USDT pair could then rise to $1.41 where bears may again mount a stiff resistance.

The downsloping 20-day EMA and the RSI in the negative zone indicate that bears are in control. If the price turns down from the 20-day EMA, the pair could drop to the 100-day SMA. If this level holds, the pair may remain stuck between the moving averages for a few days.

The next leg of the down move could begin if bears sink and sustain the price below the 100-day SMA. That could clear the path for a possible drop to $0.69.

Solana (SOL) broke out of the downtrend line and the 20-day EMA ($143) today, which suggests that the bears may be losing their grip. The 20-day EMA has flattened out and the RSI is just above the midpoint, indicating a balance between supply and demand. 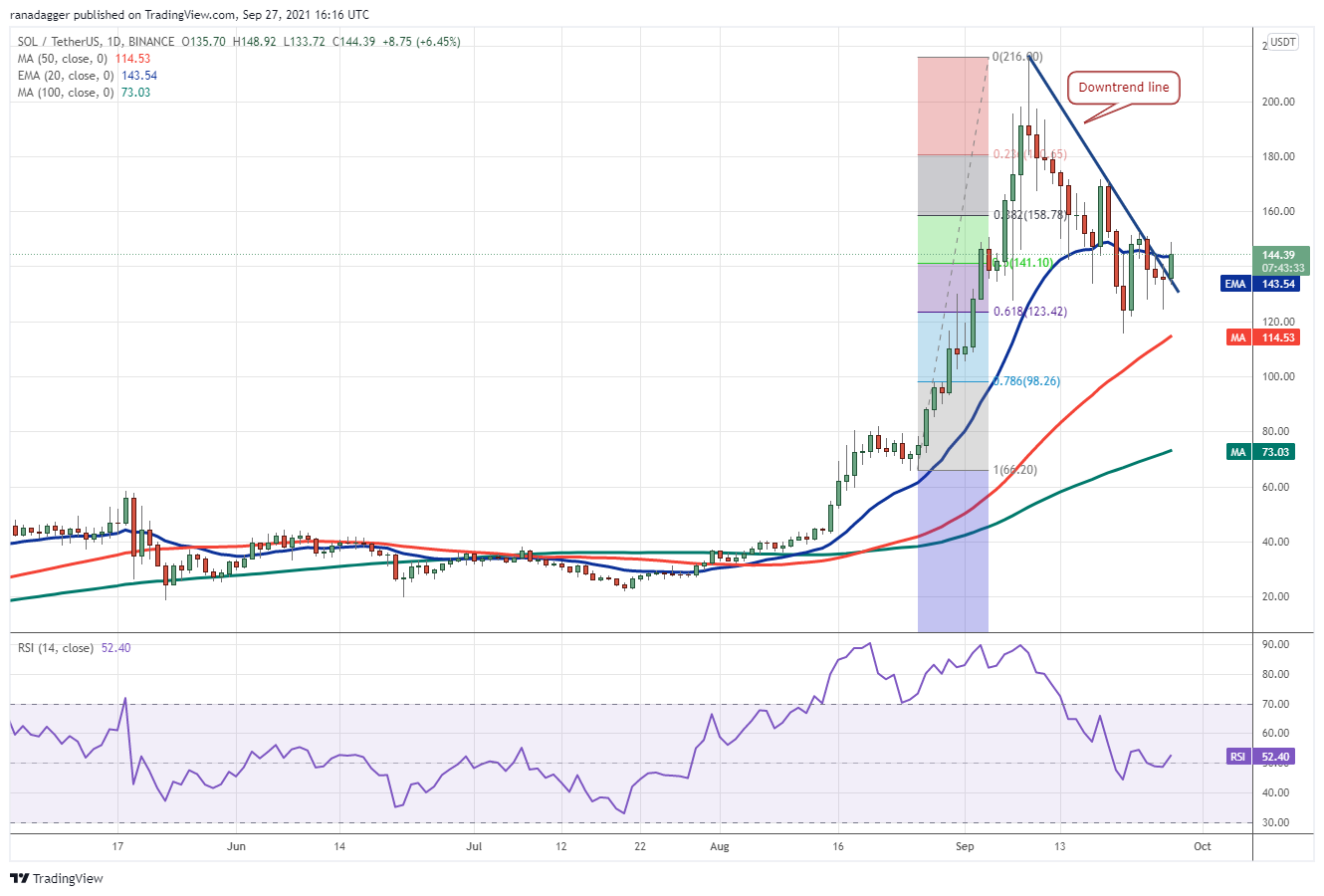 The short-term advantage could tilt in favor of the bulls if they push and sustain the price above $152.50. The SOL/USDT pair could then rally to $171.47 where the bears may again mount a stiff resistance.

If the price turns down from the current level or the overhead resistance, the bears will try to pull the price down to the 50-day SMA ($114). A break and close below this support could suggest a change in trend. On the other hand, a break and close above $171.47 could push the pair to $200.

Polkadot (DOT) broke below the 50-day SMA ($28.76) on Sept. 26, but the long tail on the day’s candlestick suggests that bulls are attempting to defend the neckline of the head and shoulders pattern. 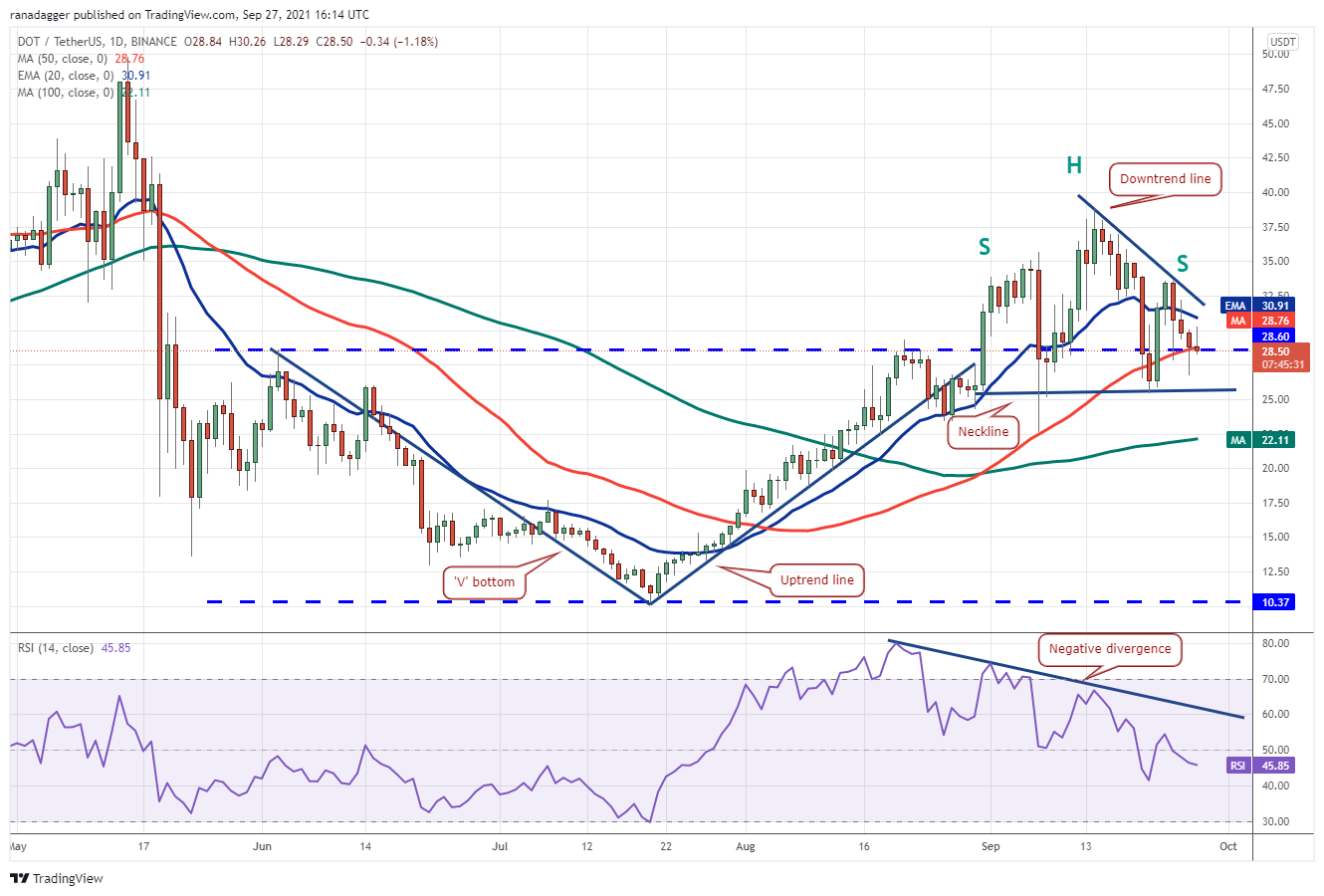 The buyers attempted to push the price above the overhead resistance at the 20-day EMA ($30.91) today but the long wick on the day’s candlestick indicates that bears are selling on rallies.

If bears pull the DOT/USDT pair below the 50-day SMA, a retest of the neckline is possible. A break and close below this support will complete the bearish H&S pattern, which has a pattern target at $12.23.

Dogecoin (DOGE) plummeted and closed below the $0.21 support on Sept. 24. Sustained selling pulled the price to $0.19 on Sept. 26 but the positive sign is that bulls defended this level aggressively as seen from the long tail on the day’s candlestick. 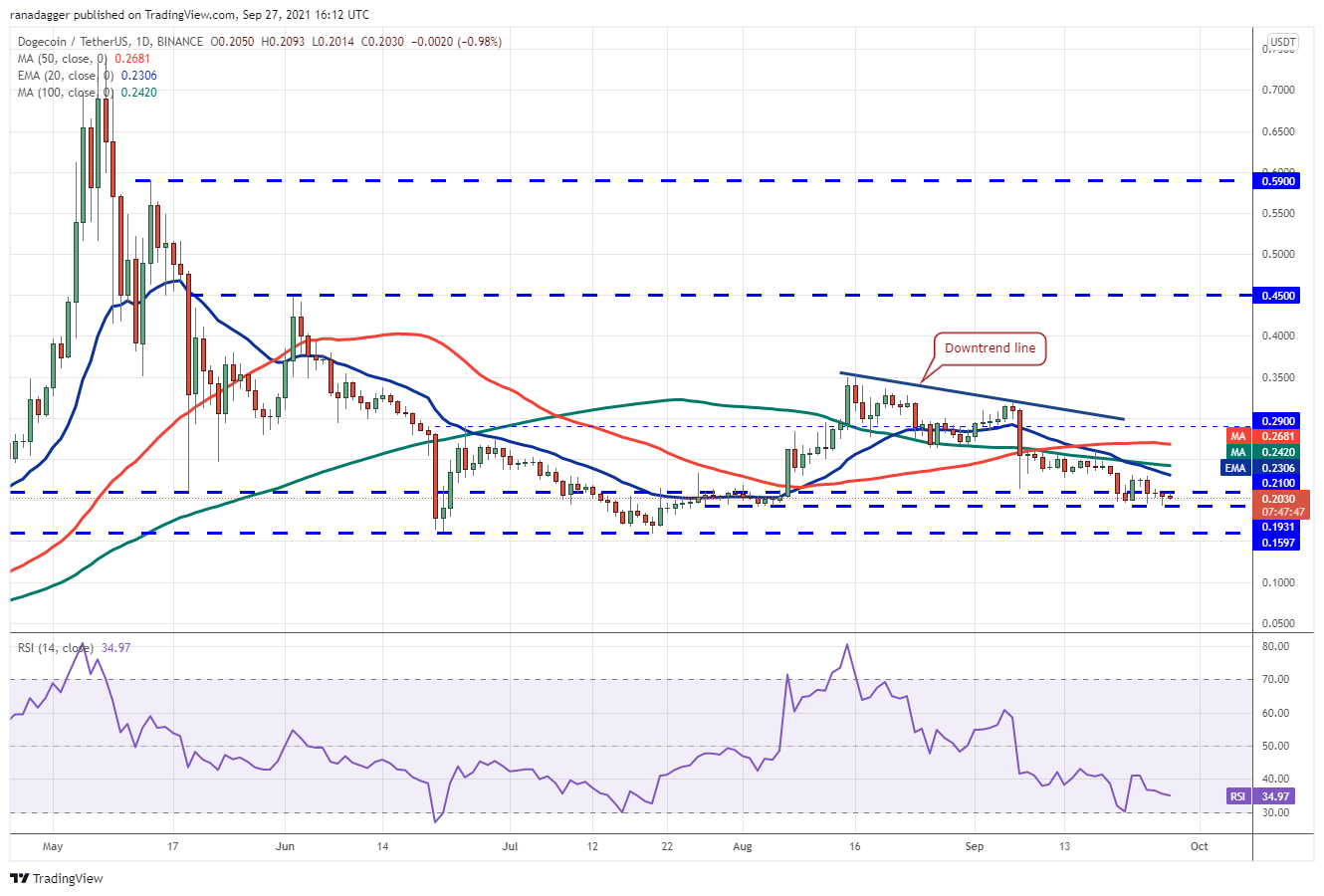 The bulls are attempting to push the price above the overhead resistance at $0.21. If they succeed, the DOGE/USDT pair could rise to the 20-day EMA ($0.23), which is likely to act as a stiff resistance.

The long tail on Avalanche’s (AVAX) Sept. 26 candlestick suggests strong demand at lower levels. The bulls will now try to push the price to the all-time high at $79.80. 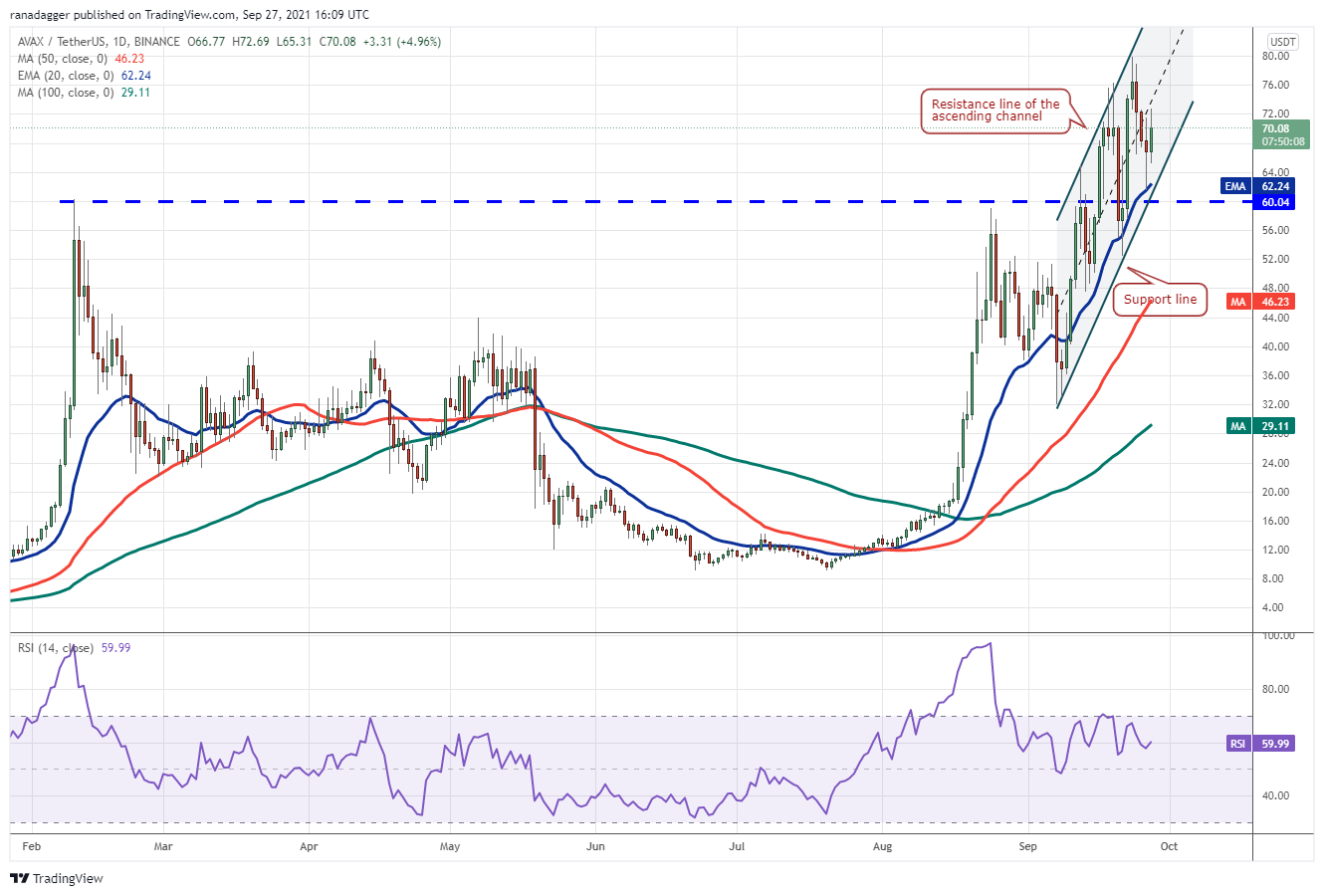 A breakout and close above the all-time high will signal the resumption of the uptrend. The bears may attempt to stall the up-move at the resistance line of the channel but if bulls overcome this hurdle, the AVAX/USDT pair could pick up momentum and rally to $100.

Alternatively, if the price turns down from the current level and breaks below the support line of the channel, the pair could start a deeper correction. A break below the breakout level at $60.04 could open the gates for a decline to the 50-day SMA ($46.23).

Terra protocol’s LUNA token turned down from $41.28 on Sept. 24 but the positive sign is that bulls did not allow the price to break below the 20-day EMA ($34.51). This suggests that bears are selling on rallies and bulls are buying on dips. 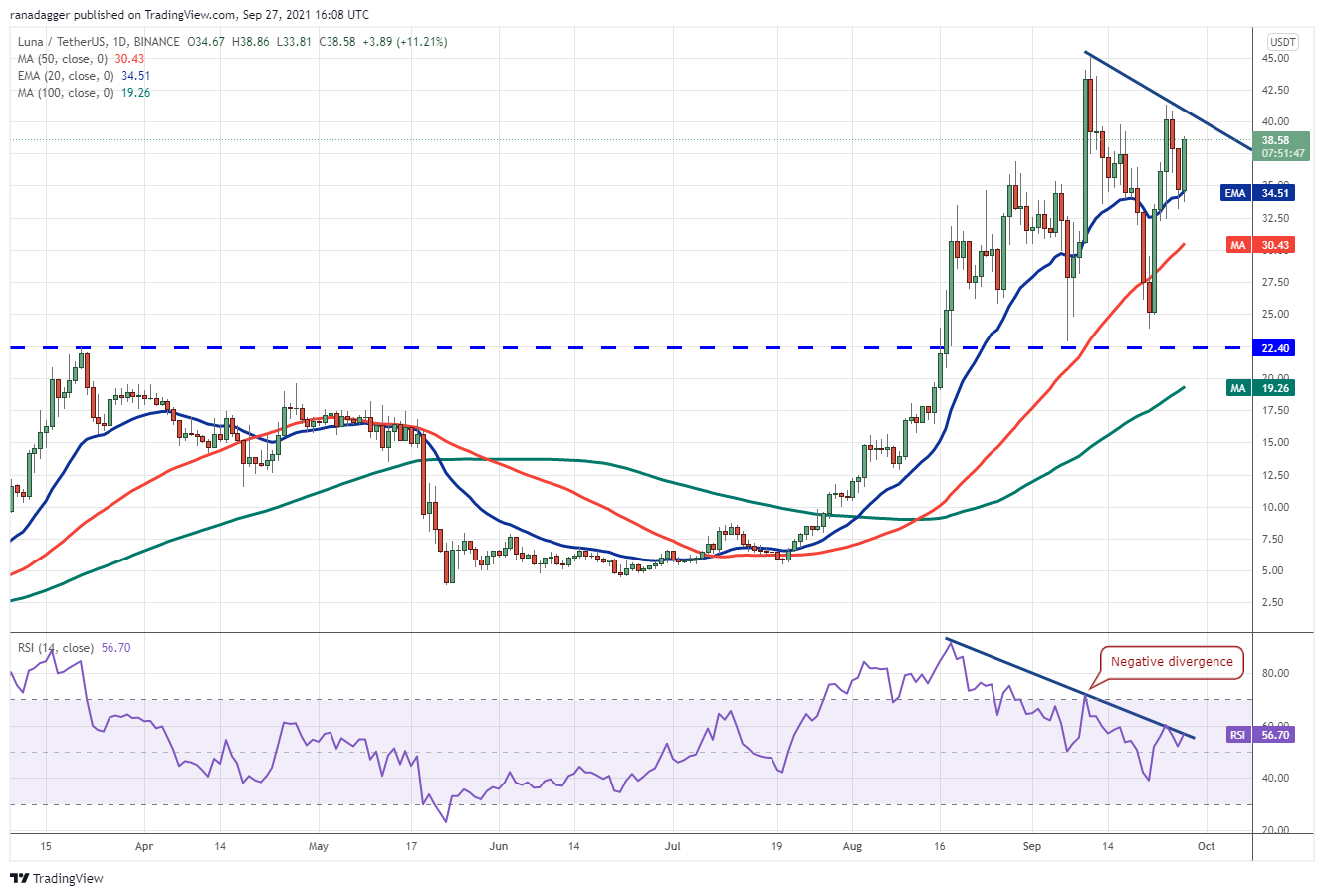 The indicators are giving conflicting signals with the upsloping moving averages indicating advantage to buyers while the negative divergence on the RSI warns that the bullish momentum may be weakening.

If bulls drive the price above the downtrend line, the LUNA/USDT pair could retest the all-time high at $45.01. A break and close above this resistance will suggest the resumption of the uptrend.

Alternatively, if the price turns down from the current level or the downtrend line and breaks below the 20-day EMA, the decline could extend to the 50-day SMA ($30.43).