On April 29 Ether’s (ETH) price rose to another all-time high, boosting its market capitalization to over $320 billion. With the recent rally, Ether’s market cap has overtaken platinum and PayPal to become the 32nd most valuable asset in the world, according to data from CompaniesMarketCap. 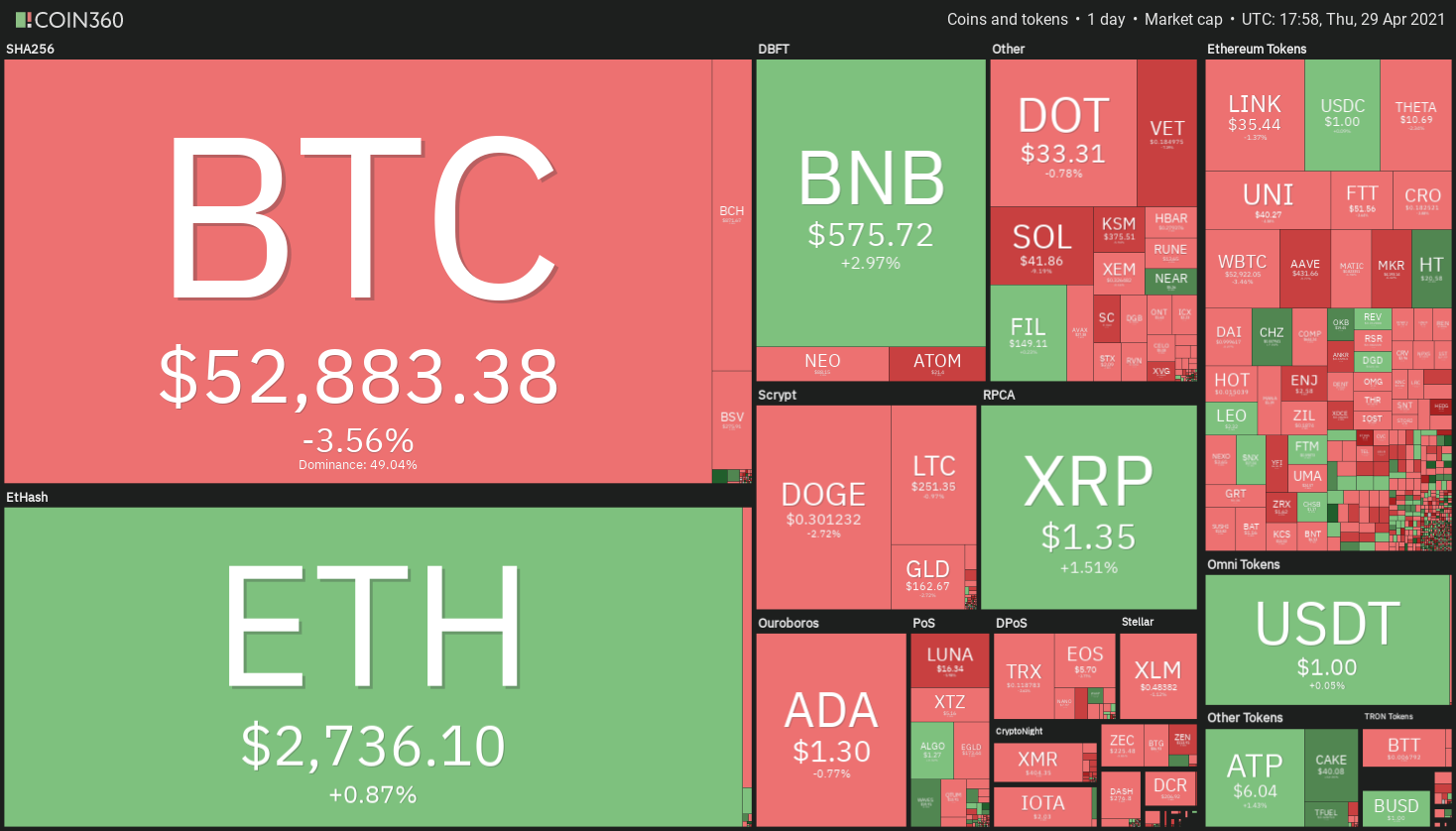 Even Asia seems to be gradually opening to cryptocurrency funds. According to the Naver News Service, South Korea’s Financial Supervisory Service may approve a crypto-related fund application by Hanwha Asset Management as early as May 2.

However, the wait for a Bitcoin exchange-traded fund in the U.S. was extended as the United States Securities and Exchange Commission deferred its decision on VanEck’s ETF proposal to June 17.

As Bitcoin tries to find direction, let’s look at three tokens that have been running hard in the past few days.

U.S.-based Buyaladdin tweeted on April 22 that it will conduct an event for the ABBC Coin (ABBC) in May where winners will be allowed to purchase $100 worth of items with one ABBC coin. This seems to have triggered a buying spree in the coin, launching its current up-move.

Presently, ABBC is not listed on many prominent crypto exchanges. ABBC Foundation CEO Jason Daniel Paul Philip announced on April 25 on Twitter that the team is engaged in talks with several prominent exchanges for listing to “provide more people with access to” the ABBC coin.

Barring that, there does not seem to be much news on the development front. Investors should study the fundamentals and invest in projects that show sustained progress rather than running behind every other pump to make a quick buck.

ABBC had been in a sustained downtrend for the past few months but the bulls are trying to stage a trend reversal. The token has surged from $0.12 on April 21 to a high at $0.42 today, a 250% rally in nine days. 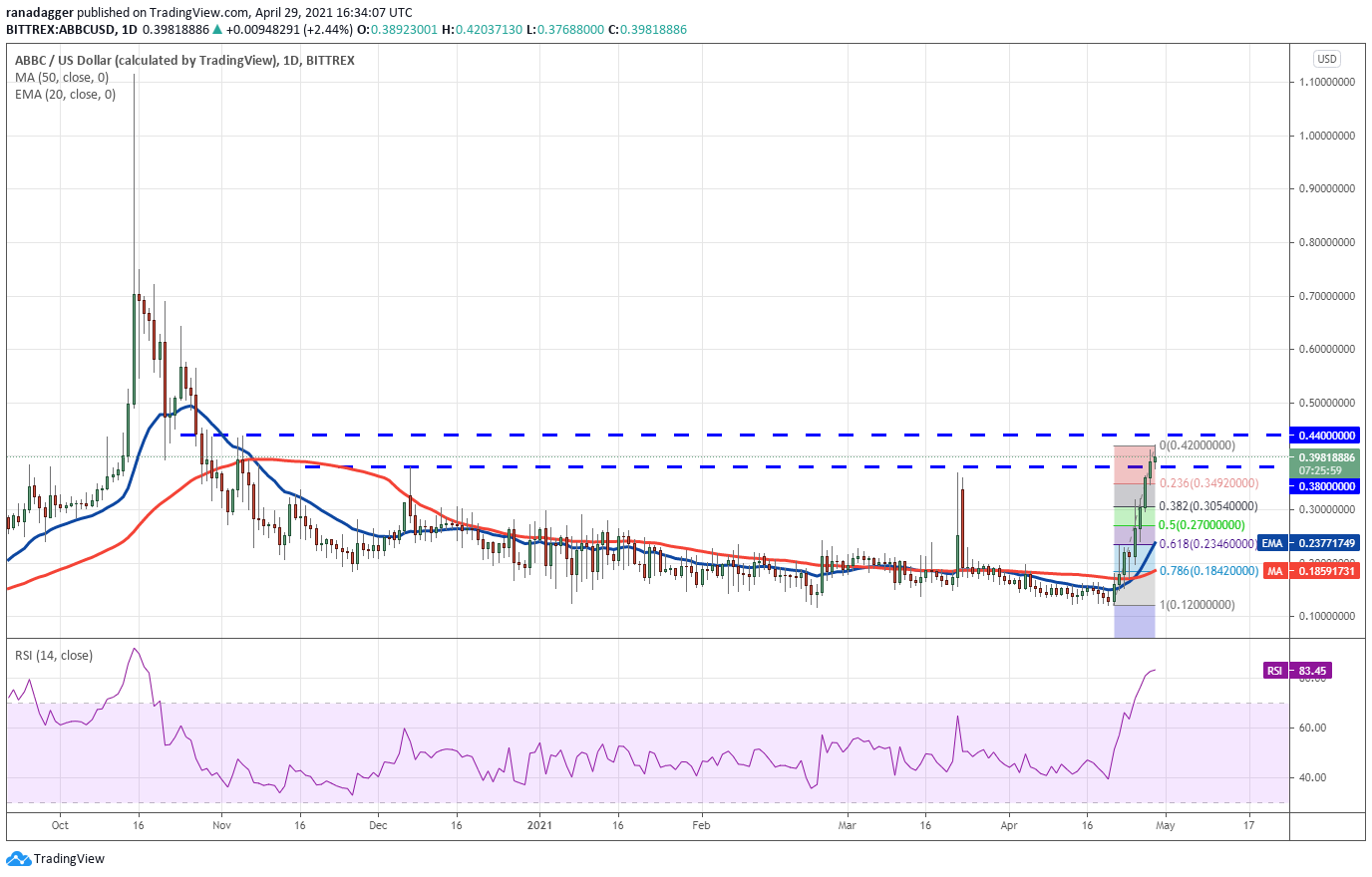 The sharp up-move of the past few days has pushed the relative strength index (RSI) above 83, indicating the ABBC/USD pair is overbought in the short term. The pair is likely to witness strong supply in the $0.38 to $0.44 zone.

A bounce off $0.27 will suggest that bulls are buying the dips. They will then make one more attempt to clear the hurdle at the overhead zone. If they succeed, the pair could rally to $0.57.

On the contrary, the failure to clear the $0.44 resistance may attract further selling and the pair may drop to the 20-day exponential moving average ($0.23).

Fantom (FTM) announced on April 28 that HyperChain Capital, a digital assets management company, has invested $15 million in the Fantom ecosystem through the purchase of FTM tokens. HyperChain had earlier made an investment of $2.5 million in the ecosystem in 2018. Additionally, HyperChain also runs validator nodes on Fantom through its subsidiary Hyperblocks

Other than the investment, Fantom may have also received a boost from its latest network upgrade dubbed Go-Opera on Thursday. The team claims the upgrade will radically improve network performance and reliability with the average time to finality reducing to about one second.

Fantom has announced tie-ups with SuperFarm, Clover, and Orion Protocol in the past few days, which are likely to strengthen its offering in the decentralized finance and non-fungible token space,

The protocol has been making inroads into a few Asian countries. On April 5, Fantom announced that its technology will be used by the Afghanistan Railway Authority to increase efficiency and transparency. That was followed by the announcement of a pilot with the Pakistan Punjab Prisons Department on April 13, where Fantom will implement custom blockchain Enterprise Resource Planning software.

VORTECS(TM) data from Cointelegraph Markets Pro began to detect a bullish outlook for FTM on April 26, prior to the recent price rise. 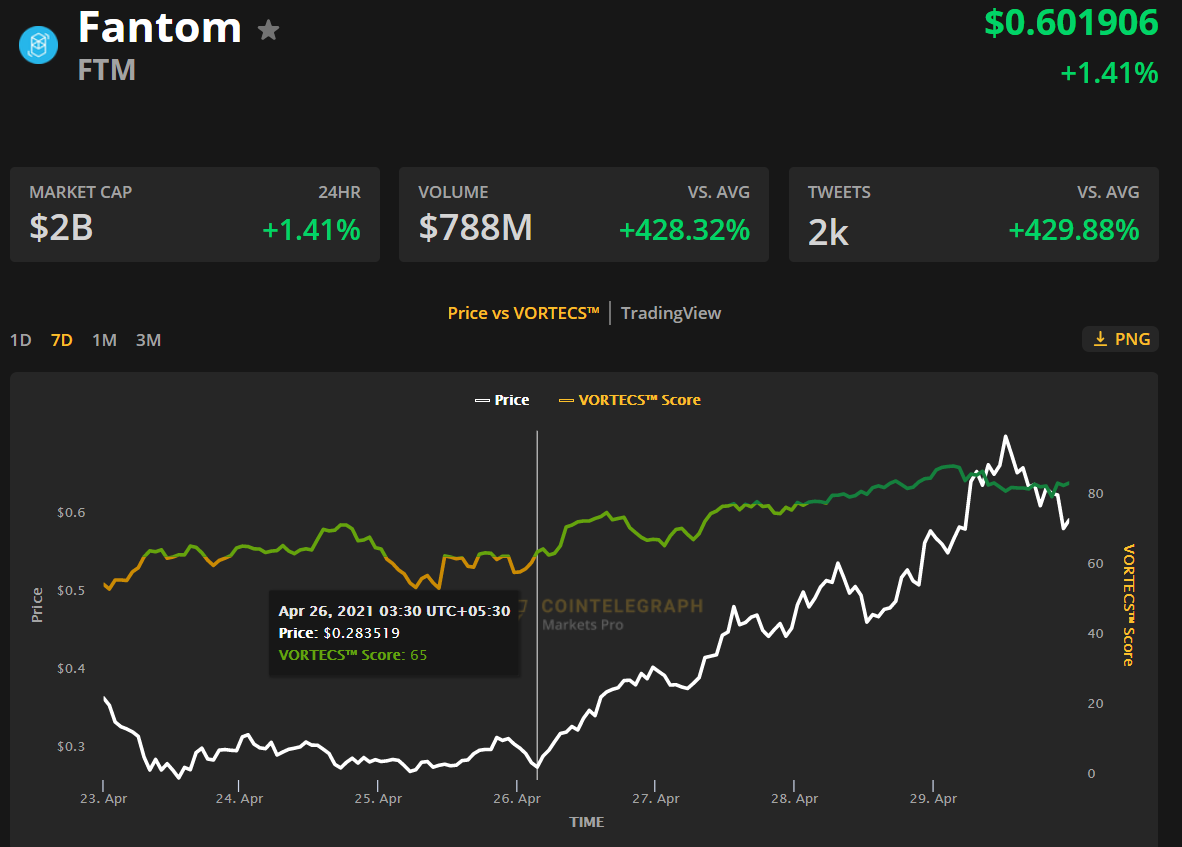 As seen in the chart above, the VORTECS(TM) Score for FTM flipped green on April 26 when the price was $0.28.

From there, the VORTECS(TM) Score consistently remained in the green and FTM rallied to a high at $0.70 on April 29, netting the traders a 150% return in about four days.

FTM has risen from an intraday low at $0.33 on April 23 to an intraday high at $0.73 today, recording a 121% return in seven days. However, after the sharp rally of the past few days, traders seem to be booking profits today as seen from the long wick on the candlestick. 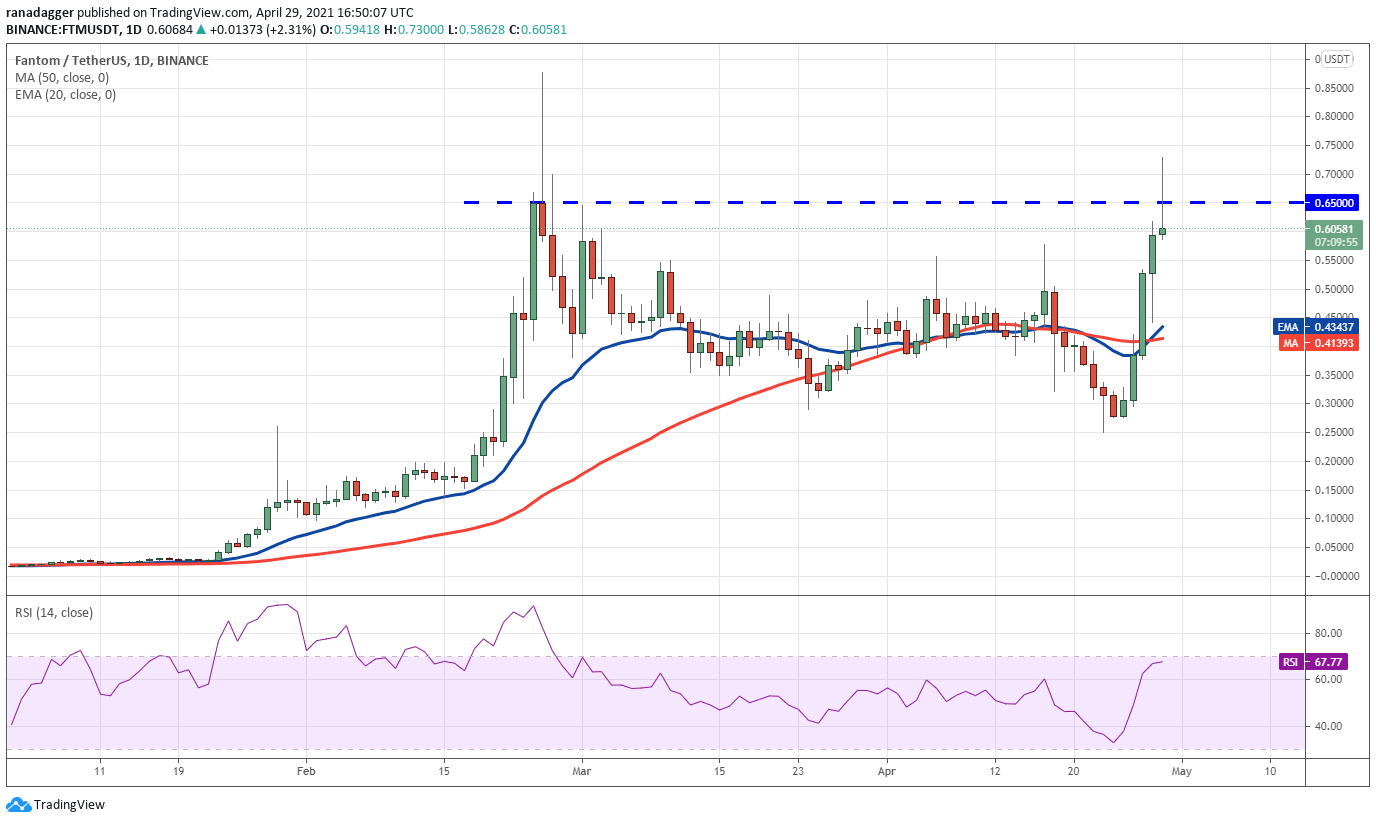 The FTM/USDT pair could now drop to the support at $0.50. If the pair rebounds off this level, it will suggest that bulls are accumulating on dips. The buyers will then make one more attempt to push and sustain the price above $0.65.

This is a critical support to watch out for because a break below it could result in a fall to $0.30. A rebound off this support could keep the pair range-bound for a few days.

DeFi has been attracting investors in large numbers in the past few months. However, as the competition heats up, the DeFi protocols have to up their game to gain market share.

To do that, AAVE launched a liquidity mining program on April 27, which is likely to increase borrowing and lending activity, attracting more investors. The current program is set to run till July, after which the community will review and alter the parameters as needed.

The liquidity mining has been introduced only on Aave V2, which may lure investors to migrate from the protocol’s version 1 iteration that still holds a sizable portion of the total value locked.

Along with focusing on DeFi, Aave seems to be pondering about building a social media protocol on top of DeFi, as highlighted in the Cointelegraph newsletter. Although further details are awaited, the experiment may generate interest among investors as the picture clears. 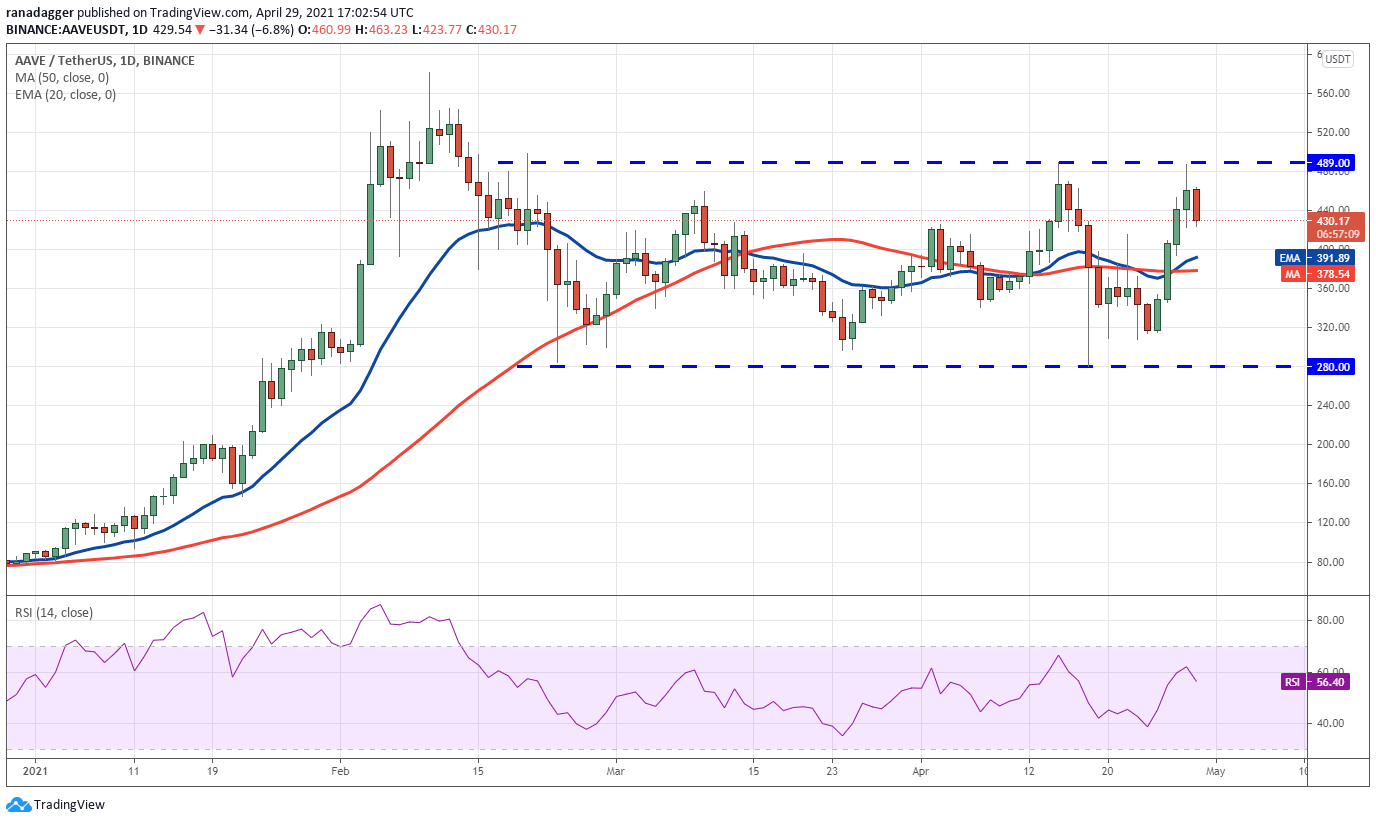 In a range-bound asset, traders generally buy the rebound off the support and close their position near the resistance. The same thing can be seen in the AAVE/USDT pair, which has turned down from the $489 resistance.

The moving averages have been crisscrossing each other without a clear sense of direction, indicating the range-bound action may continue for a few more days. The price may now correct to the moving averages and if this support cracks, a drop to $320 is possible.

This view of a consolidation will invalidate if the bulls push and sustain the price above $489. If that happens, the pair could rally to $581.67 and then to the pattern target at $698.

The views and opinions expressed here are solely those of the author and do not necessarily reflect the views of Cointelegraph. Every investment and trading move involves risk, you should conduct your own research when making a decision.