Elizabeth Warren election could lead to a 20% market correction: Investor

Federated Investors CIO Stephen Auth discusses the reaction the markets have had to impeachment, the growth track of President Trump’s policies and the impact of a Democrat being elected in 2020.

In a plan released Tuesday, Warren said she would direct the secretary of Education to “use their authority” to begin to cancel and mollify student loan debt by as much $50,000 in relief for about 95 percent of student loan borrowers.

Under the Higher Education Act, Warren argued, the Department of Education has the power to “modify, compromise, waive or release” student loans. She says that would give her administration the ability to cancel, or ease, student loan debt.

“Let’s be clear: our government has cleared far bigger hurdles to meet the needs of big businesses when they came looking for bailouts, tax giveaways, and other concessions,” she wrote in a Medium post.

She also vowed to crack down on for-profit colleges, predatory student lending and the racial disparities in the higher education system.

Her plan, the Student Loan Debt Relief Act (which Warren introduced in April alongside Rep. James Clayburn, D-S.C.), would cancel $50,000 in student loan debt for every household with a gross income less than $100,000, representing roughly 42 million Americans, or about three out of four borrowers. It would also partly eliminate debt for those who make as much as $250,000.

To back her plan to leapfrog Congress, Warren released a letter signed by three legal experts who vouched for the legality of a president canceling student loan debt via executive power. The experts, all members of Harvard’s Project on Predatory Student Lending, called the proposal a “lawful and permissible” use of authority.

“Congress has granted the secretary a more specific and unrestricted authority to create and to cancel or modify debt owed under federal student loan programs,” the letter read. “That provision empowers the secretary to execute the broad debt cancellation plan you have proposed.”

Still, she said she would continue to fight to enact the remainder of her college affordability plan, as well as the wealth tax that would help fund it. 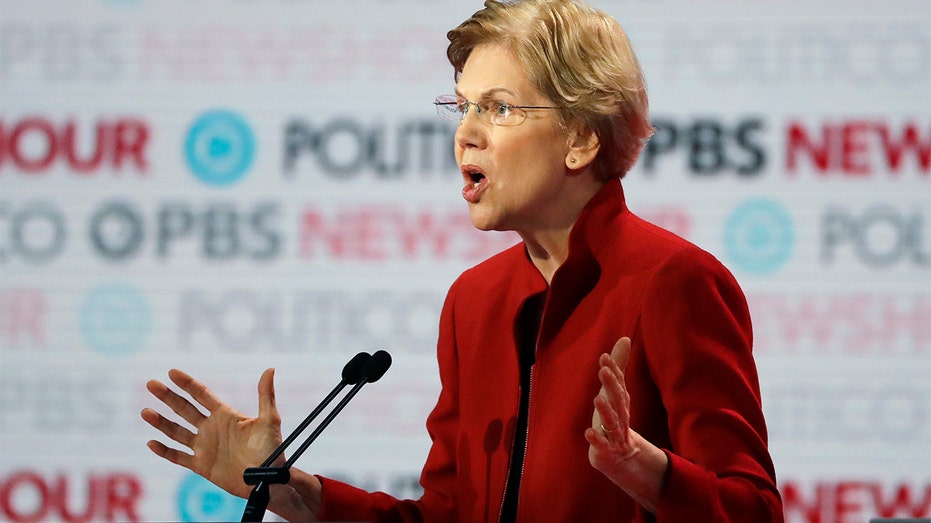 Warren’s latest policy rollout is the latest in her push to appeal to young voters who support Sen. Bernie Sanders, just weeks before the Iowa caucuses kickstart the presidential nomination process.

A Quinnipiac University poll from December found that Sanders polled at 52 percent among voters between the ages of 18 to 34, while Warren polled at 17 percent.

Outstanding student loan debt has doubled over the past decade, nearing a staggering $1.7 trillion. It’s the largest amount of non-mortgage debt in the U.S. and has been cited as a major hindrance in people’s “economic life” by Federal Reserve Chairman Jerome Powell.

Private student loan borrowers would also be eligible for debt forgiveness under her plan by converting their private debt into federal student loans. It would also suspend the collection of student loan payments for a year while the Department of Education carries out the loan forgiveness plans.

Warren's campaign estimated the plan would cost about $640 billion. However, she said that would be paid for a wealth tax of 2 percent on individuals worth more than $50 million and 6 percent on those worth $1 billion.