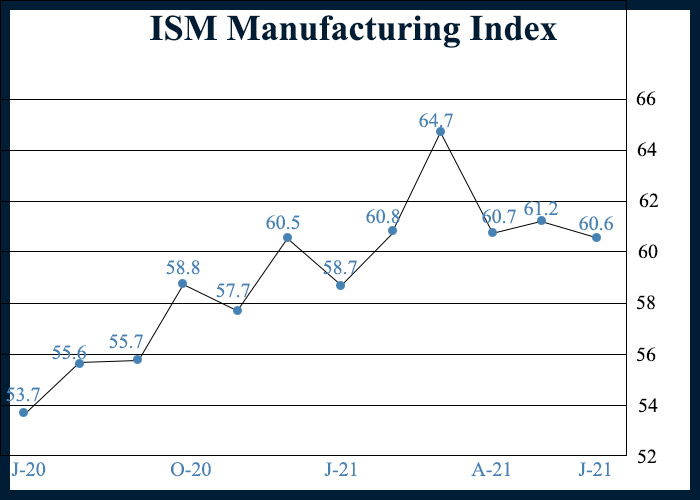 A report released by the Institute for Supply Management on Thursday showed a modest slowdown in the pace of growth in U.S. manufacturing activity in the month of June.

The ISM said its manufacturing PMI slipped to 60.6 in June from 61.2 in May, although a reading above 50 still indicates growth in the manufacturing sector. Economists had expected the index to edge down to 61.0.

The modest decrease by the headline index partly reflected a slowdown in the pace of growth in new orders, as the new orders index fell to 66.0 in June from 67.0 in May.

The employment index also slid to 49.9 in June from 50.9 in May, indicating a slight contraction after six straight months of job growth.

On the other hand, the report showed the production index climbed to 60.8 in June from 58.5 in the previous month.

“Overall, the report adds to signs that the ‘transitory’ surge in prices seen over the past few months still has a little while to run,” said Michael Pearce, Senior U.S. Economist at Capital Economics.

He added, “That will make life more uncomfortable for Fed officials but, with labor shortages likely to keep a brake on employment growth, we suspect they will remain focused on the shortfall in employment from their broad-based and inclusive full employment goal.”

Next Tuesday, the ISM is scheduled to release a separate report on activity in the service sector in the month of June. The services PMI is expected to slip to 63.3 in June from 64.0 in May.