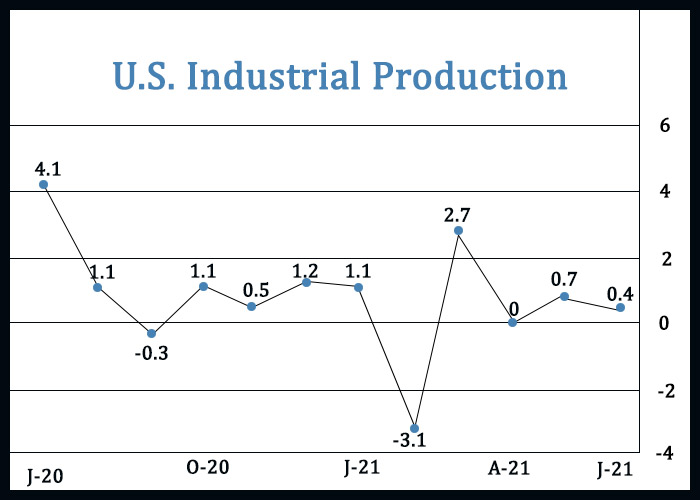 Partly reflecting a modest decrease in manufacturing output, the Federal Reserve released a report on Thursday showing U.S. industrial production increased by less than expected in the month of June.

The Fed said industrial production rose by 0.4 percent in June after climbing by a downwardly revised 0.7 percent in May.

Economists had expected industrial production to increase by 0.7 percent compared to the 0.8 percent advance originally reported for the previous month.

The uptick in industrial production was largely due to a 2.7 percent spike in utilities output, which reflected heightened demand for air conditioning, as much of the country experienced a heat wave in June.

Mining output also jumped by 1.4 percent during the month, while manufacturing output edged down by 0.1 percent.

The dip in manufacturing output came as an ongoing shortage of semiconductors contributed to a 6.6 percent nosedive in the production of motor vehicles and parts.

“Manufacturing output ex-autos rose by 0.4%, though that only brings it into line with pre-pandemic levels, which is a major disappointment given the strong rebound in goods demand,” said Michael Pearce, Senior U.S. Economist at Capital Economics.

He added, “That highlights the role broader shortages – primarily of skilled workers – that are still holding the sector back.”