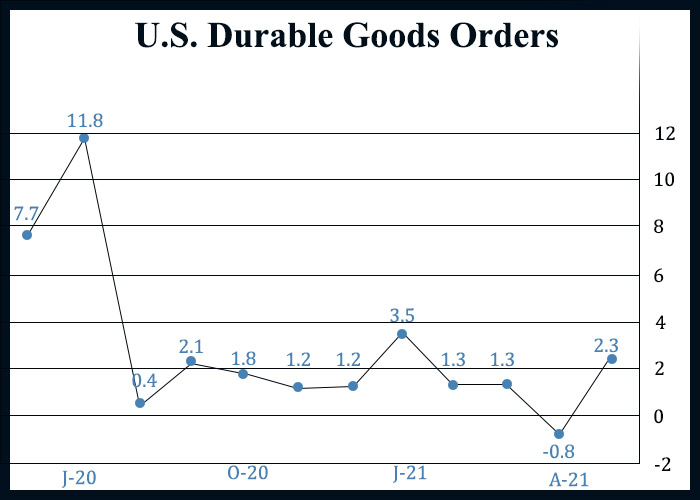 New orders for U.S. manufactured durable goods rebounded in the month of May, according to a report released by the Commerce Department on Thursday, although the increase fell short of economist estimates.

The report said durable goods orders surged up by 2.3 percent in May after falling by a revised 0.8 percent in April.

Economists had expected durable goods orders to jump by 2.7 percent compared to the 1.3 percent slump that had been reported for the previous month.

The rebound in durable goods orders came as orders for transportation equipment bounced back, spiking by 7.6 percent in May after plunging by 6.6 percent in April.

Orders for non-defense aircraft and parts soared by 27.4 percent in May after skyrocketing by 31.5 percent in the previous month.

The report also showed a rebound in orders for motor vehicles and parts, which jumped by 2.1 percent in May after plummeting by 8.1 percent in April.

The uptick in ex-transportation orders came as significant increases in orders for primary metals and electrical equipment, appliances, and components were partly offset by a notable decrease in orders for fabricated metal products.

Meanwhile, the report said orders for non-defense capital goods excluding aircraft, a key indicator of business spending, edged down by 0.1 percent in May after spiking by 2.7 percent in April.

Shipments in the same category, which is the source data for equipment investment in GDP, increased by 0.9 percent in May after jumping by 1.0 percent in the previous month.

“The continued strength of shipments suggests business equipment investment is on track for another strong gain in the second quarter,” said Michael Pearce, Senior U.S. Economist at Capital Economics.

25/06/2021 Economy Comments Off on U.S. Durable Goods Orders Rebound In May But Miss Estimates
Markets