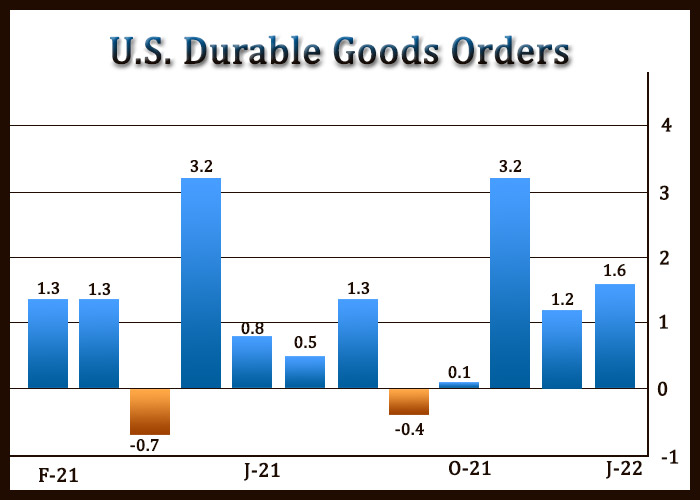 New orders for U.S. manufactured durable goods increased by much more than expected in the month of January, according to a report released by the Commerce Department on Friday.

Economists had expected durable goods orders to climb 0.8 percent compared to the 0.7 percent drop that had been reported for the previous month.

“Solid goods demand and plenty of backorders will keep manufacturing on a very healthy course even as spending tilts in favor of in-person services,” said Nancy Vanden Houten, Lead U.S. Economist at Oxford Economics. “And we should see better supply-side news as shipping bottlenecks slowly clear, input shortages diminish, and Americans return to the job market.”

She added, “But we should be mindful that supply chain and labor woes can’t be resolved overnight, and the Russian invasion of Ukraine may prolong supply-chain bottlenecks.”

The bigger than expected increase in durable goods orders was partly due to a spike in orders for transportation equipment, which shot up by 3.4 percent in January after jumping by 1.7 percent in December.

Economists had expected ex-transportation orders to rise by 0.4 percent, matching the increase originally reported for the previous month.

The report also showed orders for non-defense capital goods excluding aircraft, a key indicator of business spending, advanced by 0.9 percent in January after rising by 0.4 percent in December.

Shipments in the same category, which is the source data for equipment investment in GDP, surged up by 1.9 percent in January after jumping by 1.6 percent in December.

28/02/2022 Economy Comments Off on U.S. Durable Goods Orders Jump 1.6% In January, Much More Than Expected
Markets