They are on again… no, wait, they're off… but hold on, now they are on again. Yes, definitely on. The relief was palpable. Share prices surged and bond markets sold off anew. I'm referring of course to interminable US-China trade talks.

Trade is the big bogey that these days hangs over financial markets, and it is one, moreover, which central banks are powerless to influence. They can do little or nothing to counter the malign effects of the escalating tariff war. 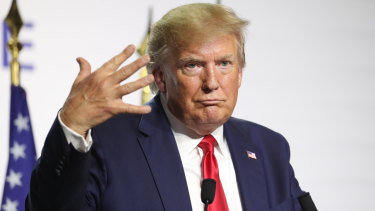 Markets today ride developments in Donald Trump's trade war with China – or "dispute", as Beijing insists on calling the conflict – in much the same way as they used to be driven by the utterances of the US Federal Reserve, on whose every word they seemed once to hang.

But now it is Donald Trump’s tweets on China from which they take their cue, the tone of which, as we have learnt, appears to depend as much on which side of the bed he got out of as any thought-through strategy.

With a president as capricious as this one, markets do not know if they are coming or going.

Yet as high-level trade talks between Washington and Beijing once again resume, there are perhaps some guidelines we can inject into the debate.

Described aptly by the former Central Intelligence Agency boss General Petraeus as "a belligerent dove", Donald Trump is not in truth the reckless, Major Kong madman, intent on sparking the Third World War, he sometimes seems. In coming down hard on China, he taps into a rich seam of popular sentiment and grievance which on many levels is entirely justified and strikes a deep chord across the western world. By bankrolling the initial phase of Chinese infrastructure spending through the World Bank, America played a key role in China's development miracle. For a long time the relationship between benefactor and beneficiary was essentially a symbiotic one. There was upside for both. But China's growing superpower and technological ambitions were bound at some stage to bring it into direct conflict with the incumbent hegemon.

A Pew Research Center survey found unfavourable public opinion in the US of China has reached a 14-year high. Today, 60pc of Americans have an unfavourable view of China, up from 47pc in 2018, and the highest since it began asking the question.

Americans also increasingly see China as a threat. Around a quarter of Americans (24pc) name China as the country likely to pose the greatest future threat to the US, twice as many as said the same in 2007.

The point that markets seem to have missed in their repeated relief rallies, when hopes of a trade deal rise – in much the same way as they can't yet bring themselves to recognise the inevitability of a no-deal Brexit – is that there is very unlikely to be any return to the ex ante status quo in China's relationship with America. There can indeed be no lasting deal with China, for the complaint has gone way beyond that of unfair trade. It's also about intellectual property theft, China's geo-political ambitions, the technological arms race, and most important of all, two very different and irreconcilable visions of the future – the one autocratic and state-controlled, the other laissez-faire and democratic.

Initially an entirely partisan assault that outraged the economic establishment, Trump's approach to China has come to command support across the political divide. He has given form to a long incubating resentment that is not about to go away.

Even if some kind of unstable deal on trade is reached, the underlying conflict will inevitably break out anew at some stage. Markets are deluding themselves in believing lasting solutions possible. It's proving impossible to counter the narrative that China's rise has been bought at America's expense.

The good news is that underneath the bluster, Trump is plainly a bit of a softie. All-out war with China is not Trump's approach; witness his studied silence on Hong Kong, where the US president has deliberately not weighed in behind the protesters. Trump's strategy on China is one of containment, not outright confrontation, and for the sake of the polls, something that can be represented to voters as a political win. That's not to say that by accident, things couldn't escalate into something much worse, but markets may well be overestimating the risks.

Some degree of deglobalisation and technological balkanisation is inevitable. But it could have been a lot worse, and after Trump, may indeed become so in more hardline hands. Don't assume the election of a Democrat will make things better.

September 10, 2019 Economy Comments Off on Trump’s trade fight with China was inevitable – but total warfare is not
World News