A year ago, while many countries were still reeling from COVID-19, China seemed to be one of few places prospering through the pandemic. It was also the only major economy that reported growth in 2020. Global investors were bullish on Chinese stocks even as Beijing’s regulatory crackdown on its private sector became more like a political campaign.

That led some people in China to argue that its one-party authoritarian rule offered a compelling alternative to traditional liberal democracy. The United States was declining politically and economically, they said, and the world was “gravitating toward China.” Many Chinese cheered the narrative online. 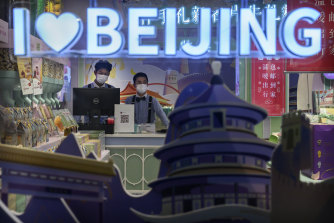 China’s economy is feeling the effects of its zero-COVID strategy.Credit:Getty

A year later, the tone within China is more one of anxiety, anger and despair. In the past month, hundreds of millions of people there have struggled under lockdowns as coronavirus outbreaks spread across the country. Foreign investors are dumping Chinese stocks over geopolitical, regulatory and pandemic uncertainties. And the government’s support of President Vladimir Putin of Russia as he wages war in Ukraine has risked the world’s criticism, and potentially sanctions.

It’s all leading to increasingly anxious questions about the country’s path — and even about whether too much power has been concentrated in the hands of the country’s leader, Xi Jinping, who is seeking a third five-year term at the Communist Party congress late in the year.

On social media, a growing number of citizens are accusing the Communist Party of breaching its social contract with the people. They had tolerated, and sometimes praised, one-party rule in exchange for economic growth and social stability. But its stringent lockdown measures, which are straining entire cities, and its regulatory crackdowns are costing many of them jobs and income and leaving their futures looking much more uncertain and gloomier than a few years ago.

In private, some academics and businesspeople are discussing growing concerns about Xi’s focus on rivalling the United States and proving the viability of the Chinese political model — a focus that some worry has become an obsession.

Chinese citizens have to be extremely careful in criticising Xi, some of whose critics have been sentenced to as long as 18 years in prison. So some are resorting to quoting former top leaders to express their frustration that Xi has stepped away from the proven path of reform and opening that provided the country with decades of prosperity.

The public’s pent-up anger is not likely to be enough to sway Beijing’s decision-making or to threaten the rule of the Communist Party, which is accustomed to keeping people in line by using indoctrination and intimidation. But it marks a departure from the heavy silence that has prevailed under Xi’s rule.

Two years ago, China celebrated the merits of its top-down ruling approach by pointing to its success in building a new hospital in just 10 days in Wuhan and containing the spread of the coronavirus in three months. Today, many people view the makeshift quarantine centres as a symbol of Beijing’s stubborn insistence on a costly coronavirus policy that seems to mainly serve the purpose of proving the superiority of its system.

The country’s unforgiving pandemic control measures are being called the “white terror,” a nod to the vast army of neighbourhood workers who wear white hazmat suits. People have shared videos and photos of protests in which demonstrators chanted, “We need to work!” and “We need to eat!” 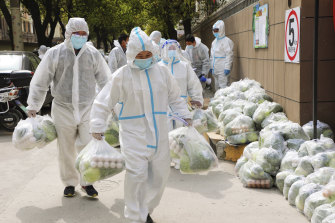 Some commenters said Beijing wasted its early success in pandemic control because it believed that its political will alone would suffice to beat the virus. They questioned why the government had not spent the huge resources it deployed in mass testing and quarantines on a vaccination drive, especially among older people. They asked whether Beijing was irresponsible in not approving the more effective Western vaccines for the sake of national pride.

Many accused the government of failing to see the huge sacrifices that businesses and individuals had to make, or complained that people were struggling to get by and falling behind on mortgages and other personal loans. They were angry that some people died of heart attacks, asthma, cancer and other diseases because hospitals turned them away under COVID restriction guidelines.

“As long as you don’t die of COVID, you can die of any cause,” goes a viral online quip.

Beijing remains unwavering in the face of public resentment.

“In the past two years, China has fully demonstrated the significant advantage in its political system and its strong national capacity in containing the pandemic,” read a commentary in the state-run People’s Daily newspaper Monday. The zero-COVID policy is a “line of defence that a nation of 1.4 billion people will have to hold,” it said.

The only policy area that Beijing has relented on somewhat has been its regulatory crackdowns on the private sector. After a heavy sell-off of Chinese stocks in mid-March, China’s economic czar, Liu He, urged government agencies to roll out market-friendly policies and to show caution in introducing any measures that risked hurting the markets.

But China’s political-campaign style regulatory crackdown has done its damage. Mass job cutting, once rare in China, is happening in tech, real estate, education and online games, some of the industries that were hit the hardest by the crackdowns. Posts about unemployment are shared widely as a gloomy sentiment grips the educated middle class.

“Standing at this historic turning point, we look back to the Golden Age,” read an online post about China’s four decades of economic transformation and dreams of individual prosperity. “We all thought it would be our future,” it said. “It turned out to be an illusory dream.”