It was while watching her mother’s three-bedroom apartment being sold that the reality of the high price of Sydney's property market really hit home for Phoebe Garrett.

“It sold for $300,000 above the reserve price,” she says. “It made me wonder, how can young people compete with those who are already in the property market and have more leverage to buy, especially when they are doing it without any help?” 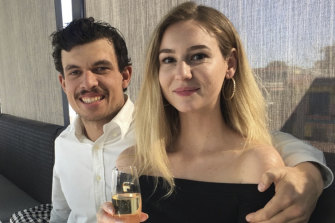 Phoebe Garrett and boyfriend Daniel Barnfield have been saving for a deposit to purchase their first home.

It’s the age-old question and one not made any easier, despite the fact that interest rates for borrowing to buy a home are now lower than they have ever been.

Lower rates make it easier for those previously priced out of the market but, in reality, it doesn’t always work like that. There is still the hefty deposit to consider and, as Ms Garrett reminds us, young couples still have to compete with those who are cashed up and already have a foot on the property ladder.

So, does it make more sense for couples like Ms Garrett and her boyfriend Daniel Barnfield to invest their money in shares, rather than putting it in a low-interest savings account, so that down the track they are better placed to buy property?

It all depends on your circumstances.

“If you’re looking at buying a home in one or two years then you’re probably best leaving your money in a savings account," he says.

"However, if your timeframe for investing is longer, say over three years or more, then 90 per cent of the time you are likely to do better by investing.”

The thought of investing, however, remains scary for many young people who have not previously dipped their toes into the world of the share market.

As Ms Garrett says, “we are slowly saving for a deposit but neither of us have any money in shares. We are a bit scared of the risk".

Traditionally, many people consider investing in the stock market to be somewhat risky.

Australians are homeowners first and foremost, with about 70 per cent of us owning a home.

However, Mr Brycki says having your wealth tied up in a single asset "is actually the riskiest option.”

The value of your asset could fluctuate and is prone to how well the property market is doing in your area, as well as the health of the country’s economy. “By diversifying your assets and investing you are actually reducing your risk,” Mr Brycki says.

For now, Ms Garrett is going to stick to putting her savings in a term deposit. “I have been saving since I was 18,” she says.

“We have enough saved now to put down a deposit on a home,” she says. She is hopeful that they will be able to buy a place of their own sometime in the next two years.