Property prices in Sydney and Melbourne are on the rise again after two years of declines, but experts are not expecting a return to boom times any time soon. They say first home buyers can take their time to buy, without fears of price rises getting away from them.

A combination of Labor's loss at the May election, with its policy of restricting tax breaks for property investors, followed by two official interest-rate cuts, plus further easing of lending restrictions by the regulator, has seen property prices in the two capital cities lift by more than 2 per cent, new figures from CoreLogic show. 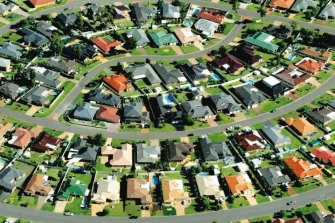 Property prices are on the rise, but a re-run of the boom is unlikely.Credit:The Age

Auction clearance rates in Sydney last Saturday hit 82 per cent and 76 per cent in Melbourne, up from just 50 per cent in both cities a year ago. And housing finance data for July 2019, released last week by the Australian Bureau of Statistics, showed demand for mortgages is also starting to rise.

However, not too much should be read into the recent figures showing higher prices according to economic and property forecaster BIS Oxford Economics.

"Some people are saying prices could get back to 10 per cent growth [annually] but I don’t think that’s likely," its executive chairman Robert Mellor said.

Mr Mellor doesn't believe first-time buyers, who were locked out during the recent boom, have to rush to get into the market.

"We are likely looking at only modest rises for Sydney and Melbourne," Mr Mellor said.

Doron Peleg, founder of property researcher RiskWise, is a little more bullish, expecting price rises of between 4 per cent and 8 per cent in both Sydney and Melbourne next year.

He said double-digit growth in prices looks unlikely. "However, in a couple of months, if we see auction clearance rates into the 80 per cent range on increased volumes, that would be an indicator that it [double-digit growth] may be possible," Mr Peleg said.

He said construction defects concerning some tower apartment blocks in Sydney is a risk, not only for buyers and investors, but also for lenders.

In Melbourne, the problem has been with flammable cladding and fire risks, with relatively few major construction defects in apartment towers.

Mr Peleg said a lender had recently approached RiskWise to identify areas in Sydney and Melbourne with apartment towers that were built over the past six to seven years. "The lender is worried that if a property is found to have a defect that it could be devalued," he said.

BIS Oxford Economics' Mr Mellor said the ability to sell apartments could be one of the factors that keep a lid on the recovery in property price rises.

"Developers could struggle to offload some of this completed stock that has not been pre-sold because of [buyer] fears," he said.

Last week the federal government introduced the bill to Parliament to fulfil its election pledge to help up to 10,000 first-home buyers a year into the market.

Under the First Home Loan Deposit Scheme, which is due to start on January 1, 2020, the government will provide guarantees to lenders that will allow first-home buyers to buy a property with a deposit of 5 per cent, instead of the usual 20 per cent.