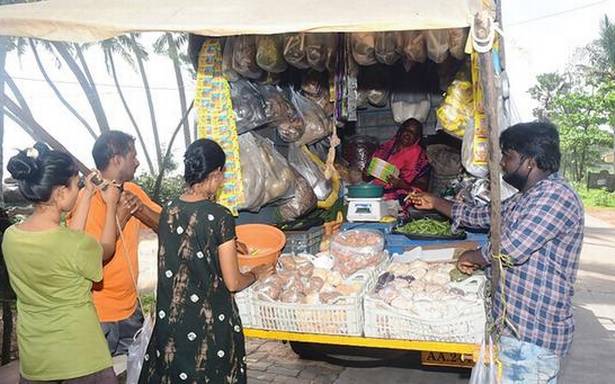 The Finance Ministry has blamed the recent uptick in inflation on adverse supply shocks due to the pandemic and elevated international commodity prices, and said it expects price pressures to abate in the coming months.

The comments on inflation in the Department of Economic Affairs’ monthly economic report for July, released on Tuesday, are largely mirror the central bank’s assessment. However, the ministry did concede that high inflation has pushed up government bond yields.

Reserve Bank of India (RBI) Governor Shaktikanta Das last week noted that recent inflationary pressures “evoke concerns” but added that they were seen as “transitory and largely driven by adverse supply side factors”. The RBI, however, raised its projection for retail inflation in 2021-22 to 5.7%, from 5.1% forecast in June.

“Inflation has remained above the band of 6% in May and June but these pressures are likely to smoothen out over the coming months with easing of restrictions, progress of southwest monsoon, and recent supply-side policy interventions in pulses and oilseeds market,” the ministry said. “However, G-sec yield curve steepened mildly owing to inflation pressures,” it added.

Retail inflation “seems to have plateaued” at 6.26% in June, from 6.30% per cent in May, but had increased from 6.23% a year earlier, the ministry noted, with an increase observed in major groups like ‘food and beverage’, ‘clothing and footwear’, ‘fuel and light’ and miscellaneous inflation.

“Pressure of high inflation prints continued to prevail on G-Sec yields in July… 10-year G-Sec yield reached 6.2% as compared to 6.05% at end-June.

Suggesting that inflation was not just a problem for India, the ministry noted that high consumer price inflation had continued in advanced economies with demand heating amid persistent supply bottlenecks. Even the IMF, it pointed out, had recognised the recent inflationary tendencies as transitory, with the expectation that they would gravitate to pre-pandemic levels by 2022.

10/08/2021 Economy Comments Off on Price pressures to smoothen out in coming months: Ministry
Markets