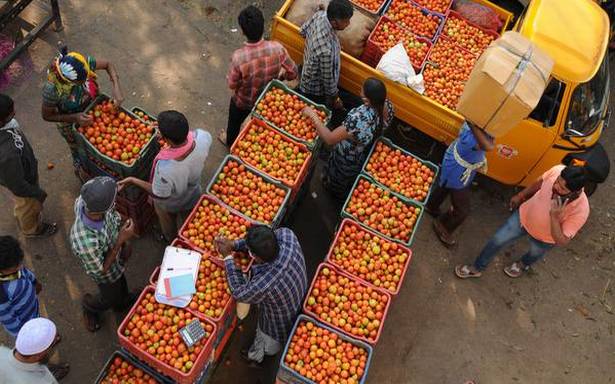 The fuel tax cuts helped douse the transport and communications inflation by 0.6% on a month-on-month basis

India’s retail inflation hardened for the second month in a row in November touching 4.91% from 4.48% recorded in October, with urban parts of the country experiencing a sharper rise in prices at a pace of 5.54% and vegetable prices jumping 7.45% from the previous month.

Transport and communication inflation eased only marginally to 10.02% in November, from 10.9% in the previous month, despite tax cuts on petrol and diesel announced by the Centre in the first week of the month, followed by most States paring their own fuel duties in subsequent weeks.

This suggests that upward price pressures persist, owing to the rise in input and commodity costs, as reflected in the wholesale price inflation touching a five-month high of 12.54% in October. November’s wholesale price trends are due to be released this Wednesday.

“With input price pressures forcing producers to raise prices in many sectors, the November retail inflation accelerated slightly faster than we had expected, shrugging off the favourable base effect and the cut in fuel taxes,” said ICRA chief economist Aditi Nayar.

“Led by a steady increase in core inflation to 6.3% in November, inflation is inching closer to the RBI’s annual expectation of 5.3% for 2021-22. A key component of this inflation is transportation and communication at 10%,” said D.K. Srivastava, chief policy advisor at EY.

The fuel tax cuts helped douse the transport and communications inflation by 0.6% on a month-on-month basis, but all the other categories of miscellaneous items displayed a hefty sequential rise, ranging from 0.2% for education to a sharp 0.9% for personal care and effects, underscoring the growing price pressures in the economy, she said.

November’s inflation is within the central bank’s target range of 2% to 6%, but on the higher side of the tolerance band, Knight Frank India research director Vivek Rathi noted. Fuel and transport costs remained the main constituents that pushed the level higher in this reading as these categories exert cost pressure on various input items, he pointed out.

Inflation in food prices paid by consumers more than doubled from 0.85% in October to 1.87% in November, with oil and fats inflation moderating only mildly from 33.5% in October to 29.7%. However, except for tomatoes and vegetables, prices of many food items corrected downwards.

“A moderation in the CPI inflation for fuel and light, pan, tobacco and intoxicants, and miscellaneous items was outpaced by the rise in the inflation for food and beverages, housing, and clothing and footwear,” the ICRA economist said.

Suman Chowdhury, chief analytical officer at Acuité Ratings & Research said the uptick in food inflation was driven by the volatility in vegetable inflation which continues to be firm at 7.4% month-on-month, despite this being the favourable winter season. This, he said, may have occurred due to irregular rainfall patterns in some parts of the country.

“Shortages of vegetables escalated prices in November, but vegetable prices are expected to subside in coming weeks with the fresh harvest hitting the market from January 2022,” said Mr. Pradeep Multani, president of the PHD Chamber of Commerce and Industry.

Relative to urban denizens, rural India faced a more moderate rise from 4.07% in October to 4.29% in November, as per official data from the National Statistical Office.

Fuel prices apart, the telecom tariff hikes and volatile vegetable prices will also play a key role in determining the inflation trajectory in coming months, but there is a risk it may get closer to the 6% outer limit for the central bank, warned Madhavi Arora, lead economist, Emkay Global Financial Services.

Even as economists are worried that the base effects from last year’s inflation trends will turn unfavourable in coming months. But most agreed there is little chance of the Reserve Bank of India (RBI) shifting from its accommodative monetary policy stance in favour of growth to focus on higher inflation, as the recovery in economic activity in recent months is still not convincing.

At the RBI’s latest monetary policy review last week, the central bank Governor Shaktikanta Das had expressed optimism that the reduction in excise duty on petrol and diesel, something he had been calling for since early 2021, would bring down inflation on a durable basis. He had also noted that the softening of crude oil prices in November would alleviate domestic cost pressures.