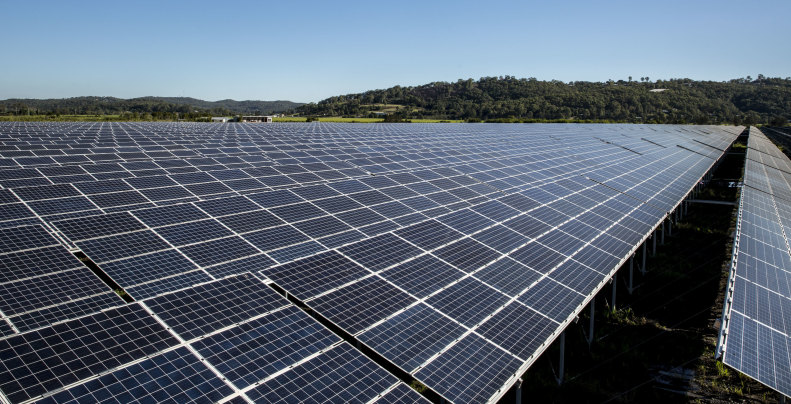 The sun, the air and the chemistry to bottle their limitless power — it’s looking more and more as if these constitute the world’s next great technological advance, a leap as life-changing for many of us as was aviation, the internet or, of course, plastics. 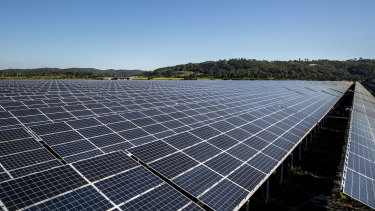 Solar power has become “the cheapest source of energy in history” in many places.Credit:Glenn Hunt

Faster than many thought possible, and despite long doubt about renewable energy’s practicality, a momentous transformation is well underway. We are moving from a global economy fuelled primarily by climate-warming fossil fuels to one in which we will cleanly pluck most of our energy out of water, wind and the fire in the sky.

People who study energy markets say that economics alone ensures our eventual transition to clean fuels but that policy choices by the governments can speed it up. In October, the International Energy Agency declared solar power to be the cheapest new form of electricity in many places around the world, and in particularly favourable locations, solar is now “the cheapest source of electricity in history.”

It can be difficult to muster much optimism about humanity’s capacity to address climate change, and I have argued before that it is wisest to look to the future with a pessimistic eye, if only to encourage urgent action toward collective problem-solving. (We are more likely to do something to solve our problems if we’re frank about how bad things might get.)

There are lots of reasons to cast doubt on the clean-energy future. Wind and solar still account for just a tiny fraction of the world’s energy production. Even their most enthusiastic supporters concede that much will need to change to realise the full potential of renewable energy. Over the coming decades consumers and businesses will have to adapt to many novel technologies, while governments will need to build new infrastructure and overhaul energy regulations built around fossil fuels.

Amid the general gloom of climate change, the clean-energy boom offers the rare glimmer not just of hope but of something more: excitement.

Still, amid the general gloom of climate change, the clean-energy boom offers the rare glimmer not just of hope but of something more: excitement. The industry’s bold claims are bolstered by bolder trends. Over the last couple of decades experts have consistently underestimated the declines in price, the improvements in performance and the subsequent speed of adoption of renewable power.

Unlike fossil fuels — which get more expensive as we pull more of them from the ground, because extracting a dwindling resource requires more and more work — renewable energy is based on technologies that get cheaper as we make more. This creates a virtuous flywheel: Because solar panels, wind turbines, batteries and related technologies to produce clean energy keep getting cheaper, we keep using more of them; as we use more of them, manufacturing scale increases, cutting prices further still — and on and on.

Jenny Chase, who analyses the solar power sector at BloombergNEF, an energy research firm, told me that when she started her job in 2005, her most optimistic scenario was that sunlight would eventually generate as much as 1 per cent of the world’s electricity. At the time, solar power contributed essentially nothing to the global energy mix, so even a tiny fraction looked pretty good.

“I thought, well, it’ll be a small thing, but focusing my career on something that’s 1 per cent of the world’s electricity, that’s all right,” she told me.

‘The fossil fuel era is over’

She was way off, and so were many others, including governmental agencies. Solar power surpassed 1 per cent of global electricity generation in the middle of the last decade. Chase estimates that solar now accounts for at least 3 per cent of the world’s electricity — that is, three times as much as she once thought possible.

In a forecast published late last year, Chase and her colleagues at BloombergNEF estimated that by 2050, 56 per cent of the world’s electricity would be produced by wind and solar power. But she says that forecast is already out of date — it’s too low.

Others go further still. “The fossil fuel era is over,” declares Carbon Tracker Initiative, a nonprofit think tank that studies the economics of clean energy, in a new report. Kingsmill Bond, its energy strategist, told me that the transition to renewable energy will alter geopolitics and global economics on a scale comparable to that of the Industrial Revolution. 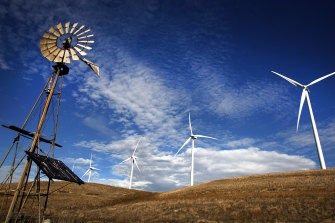 By 2050, more than half the world’s electricity is forecast to be produced by wind and solar power.Credit:Bloomberg

He cites one telling example to illustrate how and why. The world’s largest conventional oil field, Ghawar in Saudi Arabia, has the capacity to produce nearly 4 million barrels of oil per day. If you were to convert Ghawar’s annual oil output into electricity, you’d get almost 1 petawatt-hour of power per year. (That’s nearly enough to power Japan for a year; the world’s annual electrical energy demand is 27 petawatt-hours.)

The Ghawar oil field takes up a lot of space — about 3000 square miles, around the size of Rhode Island and Delaware combined. But it soon might sound crazy to use that much sunny land for drilling oil. Bond estimates that if you put up solar panels on an area the size of Ghawar, you could generate more than 1 petawatt-hour per year — more than you’d get from the oil buried under Ghawar.

But the oil will one day run out, while the sun will keep shining over Ghawar — and not just there, but everywhere else, too. This is the magic of the sun, as Bond explains: Only Saudi Arabia has a Ghawar, but with solar power almost every country in the world with enough space can generate 1 petawatt-hour of power (and without endangering the planet to boot).

Unlike fossil fuels — which get more expensive as we pull more of them from the ground — renewable energy is based on technologies that get cheaper as we make more.

It’s important to note that there remain hurdles in the way of a renewable-energy future. The most obvious one is the infrastructure required to take advantage of all this electric power — more robust power grids, for instance, and the transformation to electric power of everything from cars to container ships.

These problems are considerable but solvable. In his upcoming book, “Electrify,” Saul Griffith, an inventor (and MacArthur fellow) who is a co-founder of an organisation called Rewiring America, argues that “many of the barriers to a clean-energy future are systemic and bureaucratic, not technological.”

Griffith says that the transformation will be an economic bonanza — many analysts predict huge job creation and savings in energy prices from a switch to renewables. But if we want it in time to avert some of the most catastrophic predictions about a warming climate, we need to push the changes along even faster. Among other things, Griffith calls for a complete overhaul of energy policies in order to reduce some of the regulatory costs of expanding renewable power.

What kinds of costs? Many small, unforeseen things. For instance, in much of the US, installing rooftop solar panels requires an extensive and expensive permitting process that substantially increases the price. Through streamlined rules, countries such as Australia have managed to greatly reduce such costs.

This won’t be easy; the fossil-fuel industry is actively battling the rise of renewables. But at most, it can only slow things down.

A carbon-free energy economy is coming whether oil and coal companies like it or not.

30/04/2021 Economy Comments Off on Here comes the sun: The wind and solar boom is here
Markets