Before this month is out Treasurer Josh Frydenberg is likely to deliver the federal government's first surplus in a decade.

Not only that but it will come a year ahead of schedule on the back of surging commodity prices and an underspend on social services. 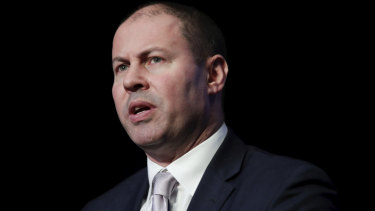 The trouble is few economists, including those pacing the floors of the Reserve Bank of Australia (RBA), share his unbridled confidence.

The market now has official interest rates going to 0.5 per cent within the first three months of next year – the lowest in history – as the central bank cuts rates further below what once would have been considered an unthinkable 1 per cent.

The economy’s two levers – fiscal and monetary policy – are pulling in opposite directions and the RBA is running out of rungs.

Which is why its governor Philip Lowe decided to ditch the tea leaves and go straight to the point in a rare interview with The Sydney Morning Herald and The Age’s political editor Peter Hartcher last week.

"I think we can do more," Dr Lowe said, broadcasting not only to the public, but to the government.

Prime Minister Scott Morrison argues that he already has done plenty. The combined effect of the first stage of the 2018-19 and 2019-20 tax cuts will ultimately see $36 billion handed out by 2022.

The challenge is that not enough workers are spending the extra $1080 many received in their tax return. I know where mine went – straight to the credit card and I’m not alone.

Australia has among the highest levels of household debt in the world, ranking only behind Denmark, the Netherlands and Norway in the Organisation for Economic Co-operation and Development’s household debt index – at 216 per cent of net disposable income in 2018.

Unfortunately, it means that a tax cut is simply not as effective as it would be elsewhere. That disconnect is already apparent in the retail sector, where spending actually fell in July – when up to $3 billion in tax cuts had already been delivered by the Australia Tax Office.

It’s also the reason why the Reserve Bank keeps banging on about infrastructure spending.

Unlike tax cuts, infrastructure investment reduces the possibility that public money being used to pay off personal debt instead of pushing cash into the economy.

The government says capacity constraints are preventing projects from getting off the ground and even the building lobby does not argue more major infrastructure building can be begun quickly in the rammed markets of Sydney or Melbourne.

Instead the RBA says maintenance and smaller scale projects in regional areas should be the focus. They are unlikely to clog the pipeline, while generating job prospects in areas like Geelong or Newcastle where the central bank is desperate to get unemployment down so national wages can rise from their catatonic lows.

So far, the government is not having a bar of it. It points to the $100 billion it will spend on projects (many of them being delivered in the latter part of the 2020s) and has called on the states to help fast-track some commitments, but putting the surplus at risk? Not a chance.

Labor has taken to calling the policy a "vanity surplus", forgetting their own commitment to the largest surplus in Australian history if it won the election. The barb, despite the motivation, is not wide of the mark.

Ultimately, the surplus will be more of a political victory than economic one. For the Liberal Party it is the foundation on which the Howard-Costello government built more 11 years of power, an ideological crusade which Morrison and Frydenberg are determined to emulate without the support of a mining boom.

A decade on, Frydenberg will, in his first year as treasurer, achieve something Labor never could in six years thanks largely to our iron ore exports.

He will deliver a surplus with economic growth at a 10 year low, falling business and consumer confidence, stubborn unemployment and the backdrop of a global trade war.

Is it worth it?

Ross Gittins is on leave

15/09/2019 Economy Comments Off on First surplus in a decade is around the corner but at what cost?
World News