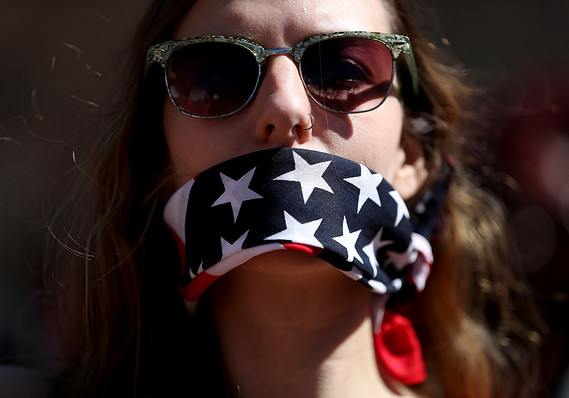 We are all Stormy Daniels. President Donald Trump is offering to pay us hush money in exchange for our silence.

Most Americans believe Trump has done a lot of inappropriate, unwise, bad, unethical, immoral, illegal or unconstitutional things. The only question is what do you do with that knowledge: Deny it? Justify it? Or condemn it?

For some Republican officials and politicians, Trump’s hush money is literal. If they deny or justify Trump’s abuses, if they hold their tongues (and most of them have), then Trump and the party will spend billions to help them in November’s elections and beyond. If they don’t keep quiet, they will be forced out of their jobs or out of the Republican Party. Even their family members are vulnerable to Trump’s retribution.

Trump’s pardons and commutations of white-collar criminals Tuesday and his rage at his acting director of intelligence for telling Congress that Russia is favoring Trump again in 2020 only add to the pressure Trump is putting on his associates not to never speak up about what Trump is doing to this country.

To win the silence of the people, Trump takes a gentler approach. He and his surrogates argue that he’s made America’s economy so great that his attacks against the rule of law and the Constitution should be forgiven as well as forgotten.

The way he figures it, a few thousand more in their 401(k) should buy their silence about the president’s corruption and obstruction of justice. As long as everybody’s getting rich, why should anyone worry about the words on some old piece of parchment?

Trump and his defenders in the Republican Party have explicitly argued that Trump should not be held accountable for his behavior because of all the good things he’s done. How can you impeach a president when the stock market is setting records?

Trump’s argument resonates with a lot of people, especially those who believe (as Trump tells them frequently) that everything was going to hell before Trump turned it around with tax cuts and deregulation and tariffs. One long-time reader told me recently that results are the only thing that matter, and his business is doing quite well.

Maybe they don’t really think Trump is responsible for all the jobs and all the growth, but they sure do admire the cojones of a rooster who struts around crowing that he makes the sun rise every day.

However, in fact, the economy of today is little changed from the economy of 2016, despite all the drama and tax cuts and erosion of environmental and labor regulations under this president. We’re borrowing trillions of dollars without much to show for it.

Our economy is the product of hundreds of millions of people, millions of businesses, and thousands of government agencies and officials. With few exceptions, presidents get too much blame or too much credit for what happens in the economy. The Federal Reserve has much more impact than the White House. Presidents don’t create jobs, start businesses or invent new technologies. They don’t plow the fields, tend the sick or teach the children. They “didn’t build that.”

The myth of Trump as an economic savior has been debunked many times, but it will never die because the public’s opinions (especially those of Republicans) about the economy are strongly colored by which party is in the White House.

Simply put, regardless of the facts, most Republicans believe the economy is terrible when a Democrat is in office, and that it’s great when we have a Republican president. Democrats believe the reverse, but to a much lesser extent. 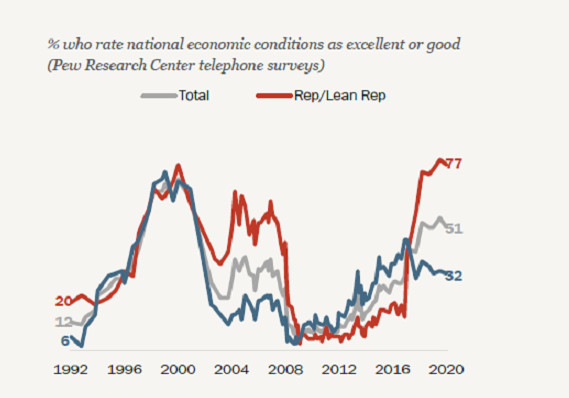 Even if the economy doesn’t change, the spin does.

While Democrats’ opinions are only slightly more negative now than in 2016, Republicans’ opinions have turned from extremely negative under Democrat Barack Obama to extremely positive under Republican Donald Trump, according to the latest polling from Pew Research.

The share of Republicans who held positive opinions about the economy doubled from 18% in 2016 to 37% in early 2017, before Trump had the opportunity to do much. Now it’s doubled again. Currently, 81% of Republicans think the economy is good or excellent, even though by most standards, the economic trends are the same as they were in 2016.

The economy improved a lot more under Obama than it did under Trump, but Republican voters believe the opposite.

Trump’s policies have had very little long-term effect. They haven’t ushered in a new golden era of investment, productivity and growth, as promised. We didn’t get 3% growth. All the manufacturing jobs didn’t return. The trade deficit didn’t vanish.

What’s really changed in the economy is that Republicans are much more confident.

The tax cut and increased federal spending did provide a short-term stimulus in 2018 and into 2019, but that’s fading now. Fiscal policy will be a drag on the economy this year. The stock market, as represented by the benchmark S&P 500 Index SPX, -1.05%, marched higher, benefiting from lower corporate taxes, the record share buybacks encouraged by the tax bill, and presidential tweeting.

Nevertheless, we are told to ignore the legal and ethical violations of the president because we were paid some hush money. I’ve heard a lot of negative things said about my fellow Americans in my years, but nothing compares to the odious slander that we’d abandon our democratic experiment for a few lousy bucks.

Rex Nutting is a MarketWatch columnist who’s covered economics and politics from Washington for 25 years.

With doors closed for coronavirus, Belgian chefs cater for hospitals

How to apply for SNAP

Mnuchin: Trump looking at how parts of US economy can be reopened