The first ruler of Beijing’s Forbidden City was different from the rest. Emperor Yongle was brutal like his predecessors and dictatorial like his descendants, but he was more worldly than any of them. For a brief period between 1405 and 1433, China would embark on a massive maritime campaign to legitimise their own prestige by engaging with foreign nations, reaching the African south and possibly as far as the west coast of Australia.

Trade boomed, Chinese spices found new ports and giraffes and rhinoceroses would follow the armada of treasure ships back home, but eventually suspicion of collusion with foreign powers took hold and Emperor Yongle’s successors imposed a ban on sea trading. 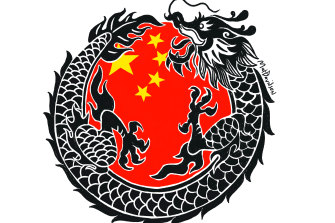 China has instructed the private sector to work more closely with the Party. Credit:Matt Davidson

“Our Celestial Empire possesses all things in prolific abundance and has no need to import the manufacturers of outside barbarians,” Emperor Qianlong wrote in a letter to Britain’s King George III in 1793.

The European Union's Chamber of Commerce in China recounted the more than two-century old message from Beijing this week.

For much of the past four decades European, Australian and American business leaders have been confident that China’s leaders were leaning heavily towards opening up the economy further after having emerged from the early-Communist era of seclusion.

“Unfortunately, the last several years have challenged this confidence, with an increasing number of voices asking if China is leaning more towards Qianlong’s belief that the Middle Kingdom has no need, or desire, for what foreigners have to offer,” the chamber said.

For all the public claims of embracing the benefits of globalisation, a series of domestic speeches by President Xi Jinping and declarations by the Central Committee of the Chinese Communist Party since May has questioned that commitment.

First the policy of “internal circulation” – the Central Committee's solution for global trading disputes is to drive domestic demand and consumption among its 1.4 billion people.

Driven by state-funded help for nation-building firms, internal circulation will encompass everything from food security to semiconductors for advanced chips in smartphones. The preference is to produce and consume at home so that foreign governments can’t undermine China’s progress by banning services such as Huawei.

“Since the 2008 global financial crisis, our economy has been transforming to one where internal circulation plays the main role,” Xi said in August. “In the future, the distinctive feature of the domestic market guiding the national economy will become even more obvious.”

The strategy gives China some protection against external shocks in a broader policy known as “dual circulation,” where it continues to harness the economic benefits of globalisation on its own terms by giving it the flexibility to choose who it does business with.

That puts European, Australian and American firms and their governments in an invidious position and turns the balance between expressing concerns over human rights or taking Chinese investment into an even more stark either/or proposition than they are experiencing today.

The second policy development is the escalation of China's intelligence and influence work in its own private sector.

An extensive outline released this week by the Central Committee shows its plans to increase its ideological power over private companies through its United Front network. The policy had been in development for months after Xi consulted senior business leaders and entrepreneurs in May and July.

“[Companies] are the main participants in our country’s economic activities, the main providers of employment opportunities and the main promoters of technological progress,” Xi said.

But there is a caveat.

Which means private companies must become spiritually closer to the state apparatus. Enter the United Front Work Department. Local regions and party committees were instructed this week to start executing this plan to closely unite “economic figures around the party”.

“Hold high the banner of patriotism and socialism, increase political and ideological guidance, and continue to build the foundation for the ideological and political work of private economic people,” the directions state.

That means accelerating party committees operating inside companies and more broadly, the control of the CCP over business through management shake-ups.

Carl Minzner, a Professor of Chinese law and politics at Fordham Law School in New York, offers this interpretation of the plan.

“The thrust of this is utterly clear: the private sector needs to toe the party line, period,” he said. “Ideologically, that feels like we're clearly back in the early 1950s. Private enterprise exists, but only so far as they can paint themselves as loyalists."

“This is a coherent policy rollout,” he said on Twitter. “Now note Xi just held another similar conference [with] scientists just a few days ago. “That's how the demands for ideological purity will start to expand.”

When they do, the value of party conformity is elevated above expertise. It’s a formula that dogged China’s economic growth under Mao and hampered its interaction with the world for decades.

“One might think that's nuts – how could Beijing start turning the clock back in that manner?” he said. “But recognise that is exactly what party ideologues have just done with respect to the private business sector.

"And now the question should be: who's next?”

Ross Gittins is on leave

Why Bitcoin’s recovery is stronger than you think