Danielle Eddy, a smoker for 20 years, quit at the start of 2019. When the coronavirus pandemic hit, the 42-year-old spirits industry consultant lit up again.

"When I get on a call, I walk with the phone, and I smoke cigarettes. That's what I do," she said in a phone interview from Columbus, Ohio.

She's not the only one. Thousands of miles away in Brussels, photographer Olivier Truyman says that pre-COVID, he was smoking less than three-quarters of a pack a day. Nowadays, he says, he paces in his apartment "like a panther in a cage." And he's lighting up more than a pack a day. 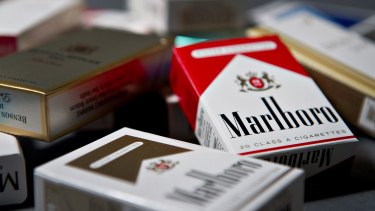 Tobacco companies Philip Morris International (producer of Marlboro cigarettes), Japan Tobacco, Imperial Brands and Altria Group all raised their sales or profit targets, saying the industry had done better than expected in 2020, particularly in the US and Europe.Credit:Bloomberg

In homes across the world, people like Eddy and Truyman are giving Big Tobacco a boost during the pandemic, despite public health advice that smoking increases the risk of severe illness from COVID-19. A combination of anxiety, boredom, stress, and the unexpected freedoms of social isolation are among reasons they give.

Overall, tobacco sales, which have been declining for years, are still falling, many people are still trying to quit, and the picture is mixed globally. For example in Britain, a study published in October by researchers at University College London found that attempts by smokers to quit jumped in April. Sales have been hit in countries such as South Africa, where tobacco sales were banned for five months from late March as part of the response to COVID-19.

But in some COVID lockdowns, the decline slowed down.

For example, in the United States tobacco sales by volume fell 2 per cent in the eight months to October 24, according to Nielsen data. That's smaller than an average drop of just over 3 per cent in the previous two years.

Slowing US sales of e-cigarettes also have benefited conventional smokes. E-cigs rose only 2 per cent over the period versus about 70 per cent on average in the previous two years. By February this year, nearly 3000 people in the United States had been hospitalised or died with what's known as E-cigarette or Vaping use-associated Lung Injury (EVALI), according to the Centres for Disease Control and Prevention (CDC).

A US government ban on most flavours of pre-filled nicotine cartridges used in e-cigarettes has made them less attractive tobacco substitutes for some people, according to Investec analyst Alicia Forry. But that's not the only reason she said tobacco volumes have picked up in the United States – cheaper gasoline is another, for instance.

It's people thinking "'my bill isn't usually this low, let's throw in an extra three packs of cigarettes, I know I'll get around to smoking them at some point,'" Forry said.

British American Tobacco told Reuters its US cigarette performance had been helped by government stimulus payments, which have boosted disposable incomes, as well as working from home and "pantry-loading" – stocking up on necessities.

Alimentation Couche-Tard, which owns convenience stores in North America and Europe, said in September it had seen strong demand for cigarettes and other tobacco products between April and July, with many smokers buying multipacks and cartons.

From the United States and Britain to Israel and South Africa, studies have shown the coronavirus pandemic has brought with it increased feelings of depression and anxiety and in some cases, more substance abuse and smoking.

Tobacco has long been a central coping mechanism for people with mental illness or in stressful situations like war or prison. 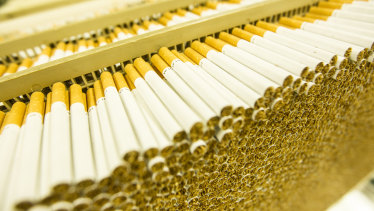 British American Tobacco told Reuters its US cigarette performance had been helped by government stimulus payments, which have boosted disposable incomes, as well as working from home and “pantry-loading” – stocking up on necessities.Credit:Nic Walker

The industry has lobbied to try to keep output going during the pandemic.

For instance in Russia, which according to the WHO has one of the largest adult smoking populations in Europe, the manufacture of tobacco products was temporarily suspended on March 30 after the government omitted cigarettes from a list of essential items.

The JT Group said Russia's Council for the Development of the Tobacco Industry, an industry association, had written to the government to try to prevent "negative consequences" of the suspension. Eduard Vorontsov, head of the group, told Reuters a lengthy suspension risked disrupting supplies of legally produced tobacco.

A representative of Deputy Prime Minister Victoria Abramchenko confirmed that she had recommended regional authorities add tobacco to their lists of essential items in early April.

In countries including France, Italy and Spain, tobacconists were deemed "essential" and stayed open in lockdown. In the United States and Britain, tobacco was on sale in stores that sell other necessities such as groceries.

And in the United States, people can also access coupons to buy cigarettes at a discount through apps on Android cell phones from firms including Altria and BAT – a promotional effort first reported by the Campaign for Tobacco-Free Kids, which last month called on Alphabet Inc's Google to prohibit such apps.

Asked about the coupons, Altria said its "responsible marketing practices" are consistent with previous years; BAT also said digital coupons were established before the pandemic. Google, which runs the Google Play store on Android phones, says it does not allow apps that sell tobacco or encourage use by minors and that it has reviewed the apps, which are rated Mature, and found no evidence of policy issues.

In the United States, the CDC says calls to the national 1-800-QUIT-NOW number jumped less sharply than they have in previous years after a regular media campaign.

Still, the impulse to smoke more may soon burn out. Imperial, which reported full-year results this week, says it expects tobacco's decline to resume in earnest next year. And Eddy, who is single, says she hopes to quit again soon.

"Once dating is available again, I'd like to be done," she said.