The confidence of Sydney’s consumers has plummeted during the winter lockdown as disruptions caused by the restrictions drag on the nation’s economic performance.

The Westpac-Melbourne Institute consumer sentiment index slumped 13.6 per cent in Sydney this month, far more than the 7.3 per cent fall during the northern beaches lockdown earlier this year. 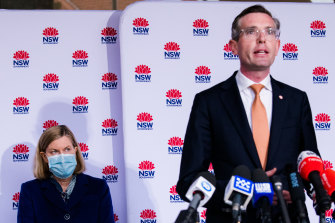 NSW Treasurer Dominic Perrottet has urged businesses to contact Services NSW to find out what they are eligible for.Credit:James Brickwood

Confidence statewide was down by 10.2 per cent and the survey’s measure of expectations for family finances over the next 12 months declined by almost 13 per cent in NSW.

The results are in keeping with other indicators that consumer spending in Greater Sydney has fallen sharply since the lockdown was imposed. New ANZ credit and debit card figures show non-food retail purchases in the city were 30 per cent lower last weekend than the weekend of May 21-23.

NSW Treasurer Dominic Perrottet said economic support measures announced by the state and federal governments on Tuesday aimed to “get money out the door” quickly and give certainty to businesses and workers.

Mr Perrottet expects about 230,000 businesses in NSW will have access to a key element of the package, which provides a grant of up to $10,000 a week for firms with annual turnover of between $75,000 and $50 million that can demonstrate a 30 per cent drop in turnover during the lockdown. 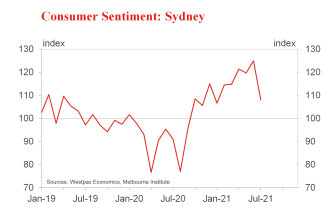 The confidence of Sydney’s consumers has plummeted during the winter lockdown.Credit:Westpac-Melbourne Institute

“We want to make sure that every business has the support they need, the cash flow they need, to keep going during this difficult period,” he said.

Firms may qualify for more than one support payment, including payroll tax relief, and Mr Perrottet urged businesses to contact Services NSW to find out what they are eligible for. COVID-19 disaster payments for employees who have lost work hours due to the lockdown were also increased.

Greater Sydney accounts for about a quarter of Australia’s economic output and the country’s biggest bank, along with other top analysts, warn the lockdown will shrink the national economy and could leave thousands unemployed.

Commonwealth Bank head of Australian economics Gareth Aird estimates a seven-week shutdown for Sydney would subtract a hefty 1.4 per cent from gross domestic product in the three months to September 30.

“Such an outcome on our figuring would see the national economy contract over the September quarter [by about 0.7 per cent],” Mr Aird said in a report on Wednesday, although he added that a rebound in activity would most likely follow.

Federal Treasurer Josh Frydenberg told the ABC on Tuesday evening the impact on the economy would be “significant”, with Treasury putting the cost of the Greater Sydney lockdown at $700 million a week.

Economist Chris Richardson from Deloitte Access Economics estimates an average of 25,000 jobs a week will be lost during the lockdown. Of these workers, about 5000 to 10,000 would join the unemployment queue.

“This is a solid hit,” he said. “It’s a pothole for the economy but it shouldn’t be seen as an ongoing loss.”

Mr Richardson warned there was a growing risk the economy would go backwards in the September quarter but a “bounce back” is likely once restrictions are lifted.

The consumer sentiment survey, conducted between July 5 and 9 soon after Sydney went into lockdown, showed confidence was relatively buoyant outside NSW.

But Westpac warned that consumer sentiment across Greater Sydney “could fall significantly further if lockdown measures are unsuccessful or slow to act in containing the outbreak”.

14/07/2021 Economy Comments Off on ‘A pothole for the economy’: Lockdown saps Sydney’s confidence
Markets