According to a report from blockchain analytics firm Elliptic, unregistered securities offerings represent more than half of all crypto fines handed out by U.S. regulators.

In Elliptic’s June 21 Sanctions Compliance in Cryptocurrencies report, the firm’s co-founder and Chief Scientist, Dr. Tom Robinson writes that U.S. regulators have handed out $2.5 billion in fines for crypto-related violations since 2014.

Out of the total $2.5 billion, unregistered securities offerings accounted for $1.38 billion worth of penalties, or 55.19% of all fines dished out. Fraud was the second biggest crypto violation found in the report, accounting for 37.12% or $928 worth of penalties.

The largest crypto violation on record was the SEC’s 2020 verdict on Telegram’s initial coin offering (ICO), with the encrypted messaging app being charged for violating securities laws through its 2018 unregistered ICO that raised $1.7 billion in 2018. Telegram was ordered to pay $1.2 billion in disgorgement and $18.5 million in civil penalties.

The largest fraud penalized by the CFTC was Control Finance Ltd. Ponzi scheme, with the scam’s operator, Benjamin Reynolds, having gone AWOL last year before being found and charged in March 2021. The fraud resulted in a civil penalty of $429 million, along with restitution of $143 million.

With numerous successful enforcement actions having been executed over the years, Dr. Robinson asserts the crypto sector is not the “wild west” of finance it is often characterized as in mainstream circles:

“Our analysis of crypto asset-related enforcement actions in the U.S., demonstrates that crypto is far from being the ‘wild west’ of finance. Regulators have successfully used existing laws to halt and penalize illicit activity that has exploited cryptoassets.”

The United States Securities Exchange Commission (SEC) has handed out the most monetary penalties for crypto violations, accounting for $1.69 billion or 67% of all fines.

The SEC is followed by the Commodity Futures Trading Commission (CFTC), which has divvied out 25% off penalties worth $624 million, the Financial Crimes Enforcement Network (FinCEN) with 7% or $183 million, and the Office of Foreign Assets Control (OFAC) at 2.4% or $606,000. 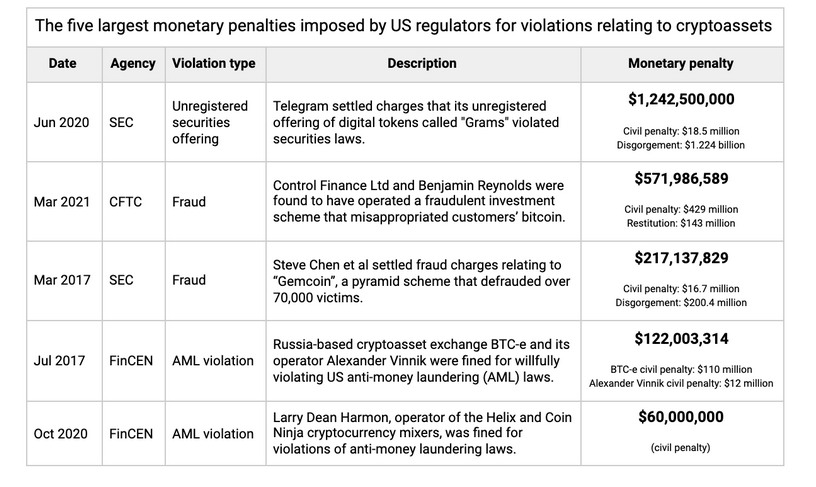