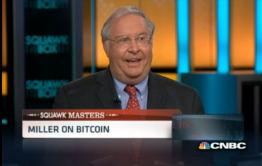 Investor Bill Miller, whose flagship mutual fund in 2020 beat the S&P 500 for the straight second year, said he believes bitcoin could replace cash and markets are underpricing inflation risk.

“Warren Buffett famously called bitcoin rat poison. He may well be right. Bitcoin could be rat poison, and the rat could be cash,” Miller noted in this Q4r market newsletter, adding that the cryptocurrency has many advantages over gold as an inflation hedge.

Legendary investor Buffett referred to bitcoin as “probably rat poison squared” and as a gambling instrument in 2018. However, several public listed companies such as MicroStrategy and Square diversified their cash holdings into bitcoin in the second half of 2020, boosting its appeal as a store of value.

Bitcoin has rallied by over 160% in the past three months and rose to record highs above $35,000 early Wednesday. The cryptocurrency’s market capitalization now stands at $670 billion, more than Berkshire Hathaway, the company Buffett helms.

According to Miller, the current relative trickle into bitcoin would become a torrent if more companies invest in the cryptocurrency, irrespective of inflation.

So far, the cost of living in the U.S. has remained well below the Federal Reserve’s 2% inflation target despite the central bank’s massive stimulus measures launched to counter the coronavirus-induced slowdown. However, Miller believes the market is likely “underestimating the risks of inflation.”

“Savings rates are unusually high and, as the economy becomes more “normal” in the second half of the year, it is likely that consumption will accelerate and, with it, money velocity. Lots of liquidity and increasing money velocity could quickly put upward pressure on inflation,” Miller noted.

The crypto community strongly believes that bitcoin is a better inflation hedge than gold, and the cryptocurrency could eventually replace the U.S. dollar as the global reserve currency. Analyst at JPMorgan said last month that the cryptocurrency’s growing popularity could have a bearing over gold’s price in the long run.