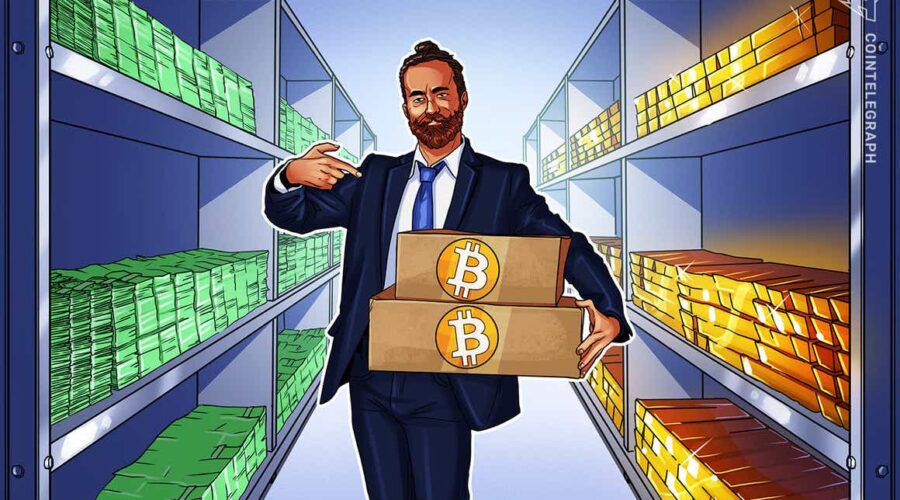 American investment firm VanEck believes that Bitcoin has double the upside of gold and could be worth as much as $4.8 million per coin if it becomes the global reserve asset.

That’s a big ‘if’ of course, and VanEck thinks the Chinese Yuan is a more likely contender.

The lofty assessment for BTC came in a March 30 insights piece written by VanEck’s Head of Active EM Debt Eric Fine and Chief Economist Natalia Gurushina who attempted to compare the price implications for gold and Bitcoin (BTC) if either were to be adopted as the backing for global currency regimes.

VanEck’s analysis found that the implied price for BTC ranged from $1.3 million to $4.8 million. The lower prediction was based on BTC as a monetary base (M0), which investment database Investopedia says includes all circulating supply of a currency and bank deposits but is not a common marker for economists to look at.

The higher prediction came from the more common M2 assessment, which Investopedia considers to be a measure of the money supply including all bank deposits with a currency and its ability to be converted into cash.

In their assessment for gold’s per-ounce price, Fine and Gurushina leaned more toward the M0 price prediction of $31,000 as a reliable starting point because “a very big number of central banks have little or no reserve gold.” The lack of deposits skews the M2 prediction to a much higher and less reliable $105,000 per ounce of gold.

Recent geopolitical unrest has already led Russia to consider using different currencies including Bitcoin to transact for oil with their “friendly” partners China and Turkey.

The trend could apply to more nations’ central banks, and likely see the US dollar’s dominance take a hit. Fine and Gurushina believe Chinese Yuan should be considered the top prediction for a new reserve currency, but that no matter what, nations will probably reshuffle their holdings.

“Central banks are likely to change their reserve mix to the detriment of dollars (and euros and yen) and the enhancement of something else, to one extent or another… As a result, some central banks — and private actors — will be diversifying their reserves.”

The analysts urged readers to bear in mind that the predictions are merely starting points for investors to formulate a framework for how to value gold and BTC in the extreme instance either becomes a global currency. It noted that there are alternatives such as finite real estate, infinite equities, and even emerging market currencies that could serve the function of gold or BTC.

VanEck has a stake in the crypto industry with its Bitcoin Strategy ETF (XBTF), which is a Bitcoin futures exchange-traded fund (ETF) that has $30.1 million in total net assets. The firm also recently filed with the Securities and Exchange Commission (SEC) to launch a new ETF that focuses on gold mining and crypto mining companies.

01/04/2022 Crypto Comments Off on VanEck says Bitcoin could hit $4.8M if it became the global reserve asset
Markets