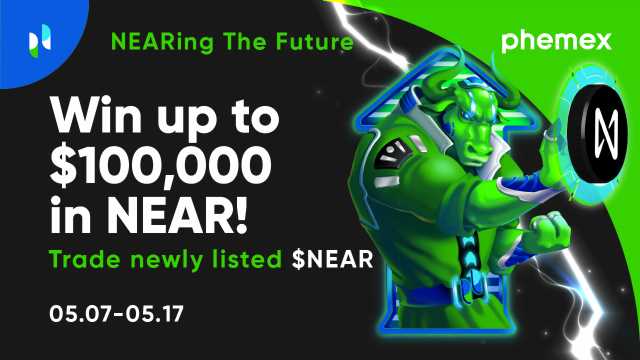 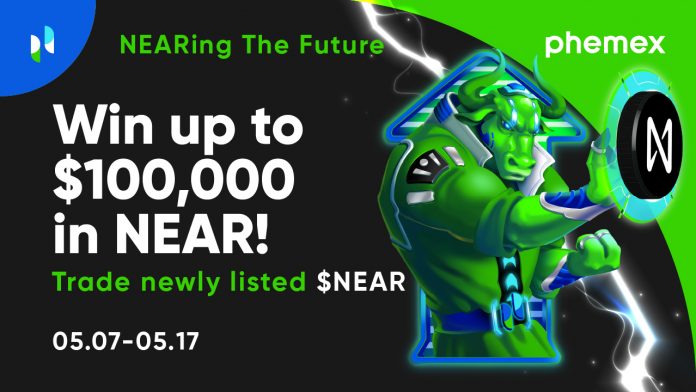 Phemex has recently added a wide range of tokens to its contract trading platform. The Singapore-based cryptocurrency exchange was founded in 2019 by Jack Tao and seven other former Morgan Stanley executives to drive financial inclusivity.

Among the hottest trading pairs added to Phemex’s platform is NEAR/USD. The NEAR Protocol is a community-run cloud computing platform designed as a Layer-1 blockchain. The platform runs on a certified carbon-neutral proof-of-stake (PoS) network.

Some of the things that make it different from other cloud computing blockchains include 1000x lower transaction fees, “human-readable” account names instead of wallet addresses and the high level of security it provides.

Let’s dive in and take a look at the platform in detail.

What Does it Offer?

Some of the main features of the NEAR protocol are:

Perhaps the most significant advantage that NEAR offers is the network’s ability to compute and store data across multiple servers through its sharded architecture. Sharding allows the blockchain to split groups of nodes into smaller “chunks” or “shards.” Each shard has its own set of data, which makes it unique from another shard. This makes it easier for the network to manage an increased load and achieve over 100,000 TPS.

One disadvantage of the NEAR Protocol is that you need a lot of money to become a validator. One of the requirements for becoming one is to get a “seat,” for which you need to stake over 60,000 NEAR, worth over $1 million USD!

Only validators have the ability to vote. This makes the network less decentralized. Currently, because seats are so expensive, there are only 73 validators, which means most users on the platform don’t have voting rights.

These drawbacks have done little to stop developers from creating some of the most incredible decentralized apps (dApps) on the NEAR network. Here are the top 3 dApps on the NEAR protocol:

The NEAR team was most recently seen at Paris Blockchain Week Summit, where they announced a partnership with Sweatcoin, an app that rewards users for walking.

Earlier this month, the team kicked off the “NEAR Regional Hub” in Kenya. The Hub will launch an incubator to encourage locals to learn about blockchain technology. In the future, NEAR hopes to increase the number of nodes by changing the requirements for running them, potentially encouraging mobile users to participate too.

The platform also wants to enhance its privacy by preventing transactions from being tracked, and by introducing ‘private shards’ which will allow a group of users to run their own private chain.

NEAR has a promising future and the more you read up on it, the easier it becomes to understand why Phemex would add it to its contract trading platform. The exchange is widely recognized for being extremely cautious about its listings, and the addition of NEAR to its platform has been long-awaited. To celebrate its newest listings, Phemex is also hosting the Nearing the Future Campaign with a prize pool up to $100,000.

The NEAR protocol was built to make building on blockchain simpler and more efficient for everyone, and this aligns perfectly with Phemex’s goals—to give the everyman first dibs on great investment opportunities.

Disclosure: This is a sponsored press release. Please do your research before buying any cryptocurrency or investing in any services.