Litecoin price started a decent recovery from the $142 support against the US Dollar. LTC/USD is facing a key resistance at $150 before the all-important $155.

After trading as low as $143.18, litecoin price started an upside move against the US dollar. The LTC/USD pair recovered a few points and traded above the $145 resistance.

Looking at the chart, the price also moved above the 23.6% Fib retracement level of the last downside move from the $154 high to $143 low. It opened the doors for more gains towards the $150 level. 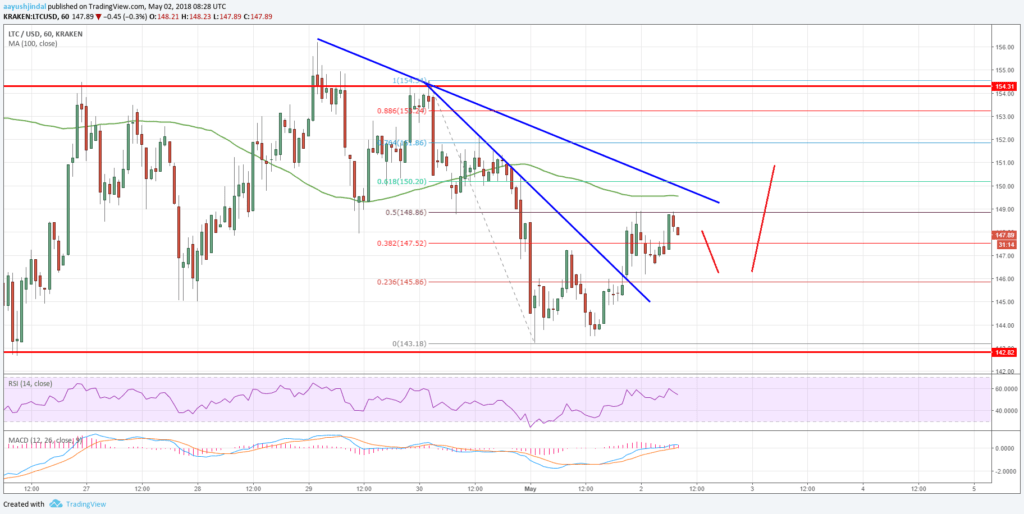 Yesterday, we saw two connecting bearish trend lines with current resistance at $146.50 and $150 on the hourly chart of the LTC/USD pair. The pair succeeded in clearing the first trend line at $146.50, but it is still below the second trend line.

More importantly, the price is facing resistance near the 50% Fib retracement level of the last downside move from the $154 high to $143 low. Additionally, the 100 hourly simple moving average is currently near the $149.50 level to prevent upsides.

Therefore, it seems like the $148.50-150.00 zone is a crucial resistance for more upsides. A break above the $150 level would open the doors for a push towards the all-important $155 resistance.

On the downside, the broken resistance at $145 may perhaps act as a support. Should buyers fail to defend $145, the price could accelerate declines towards the $142-143 support area.

To sum up, the price may be contained below the $150 resistance in the short term, but litecoin remains well supported above the $142 level in the near term.

Trade safe traders and do not overtrade!