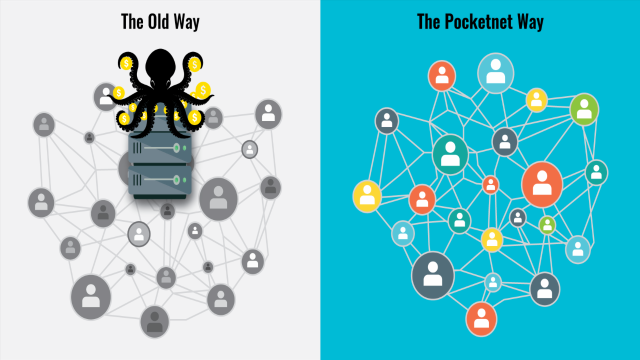 Pocketnet is a fundamentally new way to build a social media platform powered by the cryptocurrency Pocketcoin (PKOIN). It is a mix of traditional social media platforms and Bitcoin with some cutting-edge new features, such as the ability to auction off your content through NFT-Scarce.

Pocketcoin (PKOIN) is a Proof-of-Stake token that allows authors to earn crypto for their content and protects them from arbitrary censorship through community moderation. Blockchain tracks reputation and high reputation users moderate the platform. PKOIN is for decentralized advertising, boosting posts, buying unique fonts and themes in Pocketnet, as well as auctioning off NFT-Scarce tokens in the upcoming releases. Pocketnet is a network of fully decentralized equal nodes ran by users (hundreds of nodes around the world are already in operation).

Take Back the Internet with Pocketnet: Exclusive Live Crypto Challenge

Pocketnet announces a limited space exclusive live event for cryptocurrency buffs. The event will consist of four live sessions on June 10, 17, 24., 29 and will be called Take Back the Internet with Pocketnet: Exclusive Crypto Challenge. Learn how Pocketnet & Pocketcoin (PKOIN) blockchain changes the internet forever. The speakers will be Pocketnet core developers and surprise guests. There will be no public full recordings available from this exclusive closed-door event. Register today to reserve your spot. Register for the Free Crypto Challenge HERE.

Pocketnet announces release of the decentralized video platform with content creators’ rewards in Pocketcoin. The video platform is set to include live video streams with seamless donations in Pocketcoin (PKOIN) cryptocurrency. Pocketnet also announces a special PKOIN incentive program for vloggers. Every 10K views with a minimum of 250 five-star ratings will bring the author an automatic reward of 350 PKOIN. This in addition to the standard rewards for high ratings in Pocketnet. Thus, a successful former youtuber could earn significantly more on Pocketnet.

Creating a decentralized video hosting platform is a crucial question for several reasons:

How Pocketnet video solves these problems? Pocketnet video uses an open-source technology called PeerTube but advances it in some important ways. Pocketnet blockchain provides a centralized coordination ledger, it controls which server hosts which video, who backs up whom, and very importantly how servers are compensated for their services. Here is the structure of the Pocketnet video network on the blockchain:

Here is how Pocketnet solves problems A, B & C above.

Thus, you have a fully deterministic algorithm that maps any new server into a cluster and maps any new video into a cluster. Within a cluster all servers are synchronized, providing stability. The only known solution prior to Pocketnet only solved one problem out of three (specifically #2) and did it in a suboptimal way. You are talking about a Distributed Hash Table. DHT is used in torrent systems to locate a file within the system. Not only does DHT not solve problems #1 and #3, but DHT tables are notoriously slow and inefficient. One must bounce around the DHT table looking for the file, while in the combination of the Pocketnet blockchain and Rendezvous Hashing (also called Highest Random Weight Hashing), the cluster is found instantly based on the state of the blockchain at the time of the uploading of the video.

Summary: Pocketnet and Pocketcoin (PKOIN) are developing rapidly after coming out of beta. The platform now boasts features that were once thought to be an exclusive province of centralized Big Tech platforms. Pocketcoin (PKOIN) facilitates the growth of the platform by allowing content creators and node operators to earn for maintaining and growing the decentralized platform.

Pocketnet is a decentralized, open-sourced, non-corporate project. It is modeled on Bitcoin and can be called the Bitcoin of social networks, with the major difference that it uses the energy efficient Proof-of-Stake algorithm. Pocketnet is supported by a network of equal decentralized nodes with users maintaining full control of their data and content.

Pocketnet rewards node operators, and all content contributors. Active users can gain reputation and may then participate in the sophisticated content moderation system.

Many active bloggers have abandoned Big Tech’s social networks and turned their attention to Pocketnet.

Pocketcoin (PKOIN) is the native token that facilitates the Proof-Of-Stake network, and emission is limited to 24,375,000. There was no premine or ICO, as the Pocketnet team is dedicated to the Bitcoin model of organic growth.

This is a sponsored post. Learn how to reach our audience here. Read disclaimer below.