Cloud mining — a service that enables individual users to lease hashing power from dedicated cryptocurrency mining operations — came forth as professionalization and cartelization of the mining business began to drive out smaller and insufficiently equipped players from the scene.

Since there is no way to verify that the share of the mining rig you are supposedly leasing actually exists — even if returns on your investment seem to be flowing regularly at first — the scheme is widely regarded as a happy hunting ground for scammers. Perhaps the only way to steer clear of fraud is to rely on the reputation of the established cloud mining brands. But with the outbreak of the recent scandal around the cloud mining platform HashFlare, this option might also soon be off the table.

HashFlare, one of the leading names in the business, announced on July 20 that it has dropped its mining service of active SHA-256 Bitcoin contracts, pursuant to a clause of the platform’s terms of service reading the following: “The Mining process will stop if the Maintenance and Electricity Fees will become larger than the Payout. If mining remains unprofitable for 21 consecutive days the Service is permanently terminated.”

Citing the ongoing “difficult time for the cryptocurrency market,” the firm claimed that by July 18, the payouts were lower than the maintenance fees for 28 days in a row, which activated the clause allowing for the the conclusion of the contracts. The statement implied that HashFlare would be open to resume Bitcoin mining, should more favorable market conditions arise. Apparently, the cease only concerned Bitcoin contracts, as operations with other crypto assets available in the firm’s portfolio — such as Litecoin and Ethereum — proceeded as usual.

While this July has not been the brightest month ever for the crypto market, especially in comparison to December 2017, many users have rightfully questioned HashFlare’s reasoning. After briefly touching the floor at just above $6000 in the first days of the month, Bitcoin prices entered a steady upward trend, coming close to $8000 by the day that the contract termination was announced.

Additionally, the first week of the month saw the Bitcoin network’s hashrate drop massively as a result of heavy floods in the Sichuan province of China, home to a dense conglomeration of mining rigs. This should have led to a corresponding decrease in difficulty for the rest of the nodes. Even before the disaster, around the time when the mining platform’s dry season allegedly started in mid-June, the network’s hashrate plummeted to around 30 TH/s. As the HashFlare’s account of things seemed to stand in contrast with a widely accepted version of reality, the allegations of fraud began to pour out.

The cost structure for participating in the HashFlare enterprise consists of two types of payments: a one-off investment in the processing power itself, and recurring maintenance fees — normally covered from mining profits. One of the several poignant circumstances accompanying the announcement is that the cloud mining operator decided to terminate the contracts without reimbursing users for the remainder of the annual contract fees, which they had paid upfront. 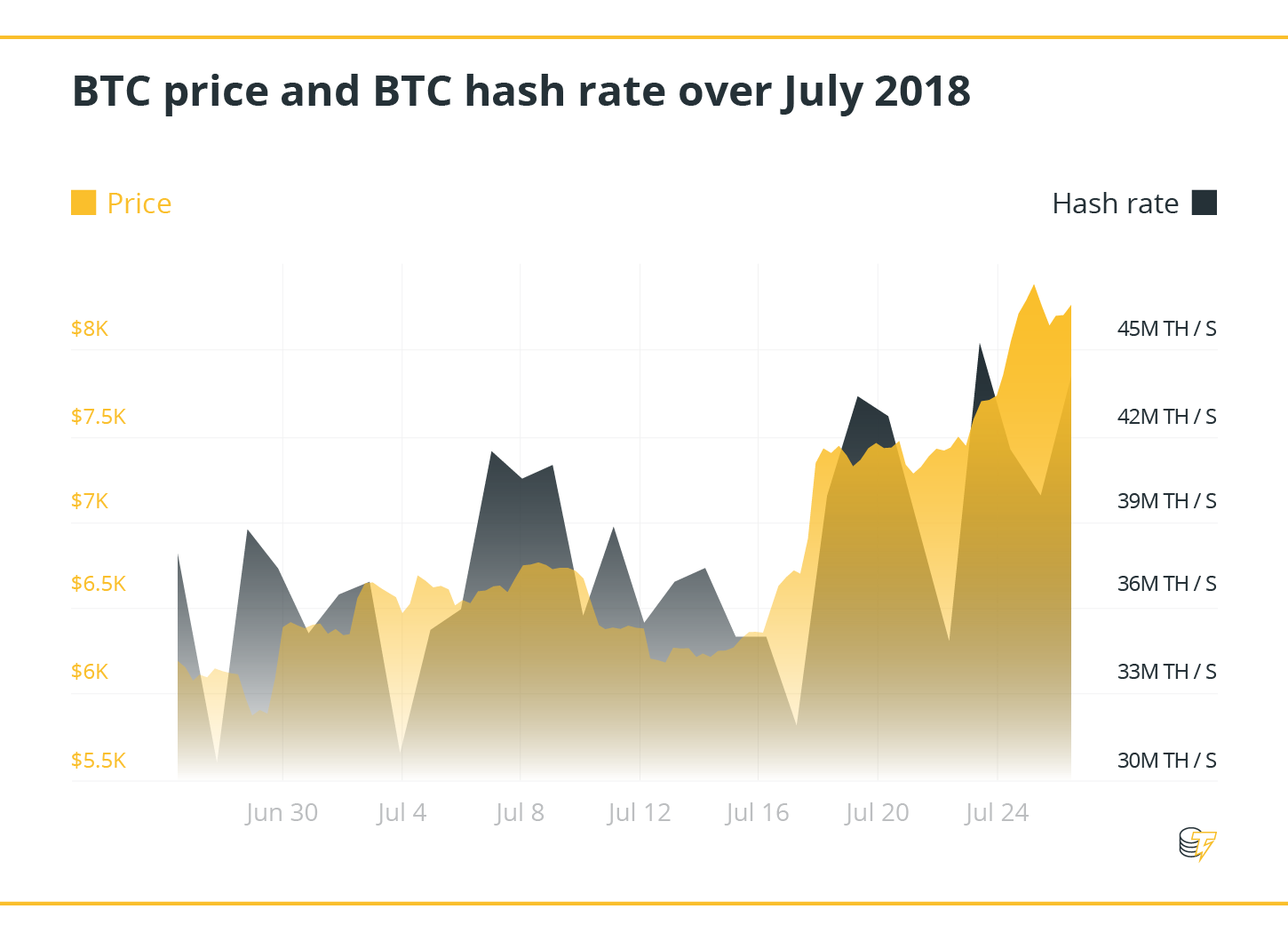 The current mishap appears to be at least the second time on record when HashFlare unilaterally altered its contractual commitments. 11 months ago, the platform switched all SHA-256 and Scrypt contracts from lifetime to one-year, on the grounds of global mining hardware scarcity. Obviously, many cloud miners did not appreciate this development and there was even a petition on Change.org with some 2,500 signatures.

Coincidentally, those who held lifetime contracts before September 2017 can derive some satisfaction from the fact that, in the wake of the recent debacle, their losses were modest. Since the yearly contracts that relaunched 11 months ago were set to expire late August, these customers are only losing a month’s worth of shares of their yearly investment in hashing power. Compared to them, people who jumped in during the year are suffering a greater degree of damage, with the most recent investors finding themselves in the worst-case scenario.

Granted, infuriated cloud miners took to Twitter and Reddit right away. A sizeable group of people who suspected HashFlare of being a scam finally had the chance to savor their ‘I told you so’ moment. The Twitter user who goes by the moniker ‘Madoff wasn't on the blockchain’ and specializes in exposing crypto fraud, gloated over what he considered evidence that HashFlare never really had actual mining facilities — despite boasting a brand new data center just a few months earlier. He also brought up a February interview with the firm’s customer relations manager Edgar Bers, pointing to numerous ‘red flags’ — inconsistencies that allegedly indicated the operation’s fraudulent nature.

While some users reported they were able to initiate the chargeback process for HashFlare payments with their credit card issuers, the less lucky ones said they were considering a class action lawsuit. The operator is based in Estonia, so strict European consumer protection laws could be potentially applicable to the case. However, some observers surveyed by Blockonomi noted that, by the time the claim makes it to court, the defendant could cease to exist or fight back by exposing the users’ personal data.

Another odd detail that plays right into the ‘scam’ argument is the new withdrawal regulations that HashFlare put in place just days before dropping the Bitcoin contracts. All of a sudden, the mining operator urged users to comply with a set of KYC procedures, severely restricting the ability of those who failed to comply to move their funds out of the platform. Assuming malicious intent, this move could serve at least two purposes: hindering the flight of capital upon the release of the news and getting some leverage over the disgruntled users who will make it to the courtroom.

Albeit there are many considerations that could point to malice, none of them look indisputable. In terminating the contracts, HashFlare followed the clause of their own terms of service, which every user had to sign upon registration. These terms were found to be unaltered since at least last year. The clause in question does not specify a particular entity that is supposed to certify that maintenance and electricity fees indeed exceeded the mining payouts. And. even if the evidence that those data centers actually exist is scarce, robust evidence that they do not exist is even scarcer. Hopefully, a trusted third party will soon enter the scene to shed some light on the true state of affairs.

Meanwhile, HashFlare’s competitors are doing just fine. Users on another major cloud mining platform — Genesis Mining — reported getting payouts on their contracts as usual. So did the customers of Minergate. HashFlare’s fluke might well provide a short-term PR boost to other major players in the field, as well as an influx of new users who will want to switch to a presumably more reliable operator. But, in the long run, the fallout from the demise of one of the most prominent cloud mining operations could prove a massive blow to the whole industry.

Cloud mining already has a reputation of a risky endeavor: While contracts are usually long-term and initial payments fixed, fluctuations of crypto prices render such investments a roulette. Especially with Bitcoin, massive crowds of new miners constantly enter the market, driving the hashrate up. A recent report by CoinJournal highlights the tremendous rate of its growth over the last several months. This is good news for the crypto industry at large, meaning that — despite the relatively unimpressive price dynamics of 2018 — more and more resources are pouring into the network. Yet, for mining enterprises, this primarily signals more competition, spelling death for those who come up short in the arms race.

Against such a backdrop, the lack of trust in service providers might become a deal-breaker. Why engage in an increasingly precarious activity that promises fewer payoffs, especially when you cannot be entirely sure that the platform facilitating your engagement is trustworthy? If HashFlare’s case entrenches in mass consciousness as a poster for cloud mining services, the model is unlikely to survive the ongoing hashrate rush.