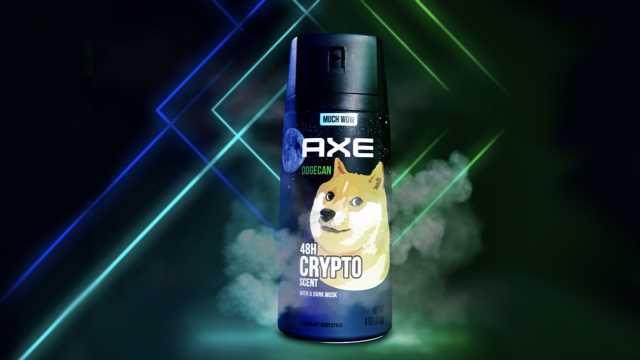 On Tuesday, the company that owns the brand of male grooming products, Axe, announced the launch of a dogecoin-themed and “crypto scented” body spray. The release was limited and currently, the body spray featuring the image of the cartoon Shiba Inu is no longer available to U.S. residents.

‘Much Disappointment’ — Doge-Themed Body Spray Is No Longer Available

Around 1,000 lucky Americans entered a giveaway of a limited edition dogecoin-themed body spray called “The Dogecan.” The body spray was released by the brand of male grooming products, Axe, a subsidiary of the firm Unilever. Axe scents are created for young male consumers and the Dogecan product allegedly contains a “crypto scent,” which lasts up to 48 hours.

The page also saw a significant amount of traffic as one individual noted on Twitter, saying that the “Doge army is so strong that their website is down.” Axe’s website tells visitors that the product is all gone in a humorous manner. “Much disappointment,” the Axe Dogecan promotional campaign says. “Sorry, people. All the Dogecans are gone. But we’re still going to the moon.”

Axe is not the only brand that has jumped on the dogecoin (DOGE) hype train. The smoked meat stick vendor Slim Jim was all about dogecoin in mid-April when the company tweeted about the meme-based crypto asset.

Conagra Brands (parent company of Slim Jim) detailed in a company earnings call that Slim Jim saw an “uptick in audience interaction” since the tweets. To this day, the official Slim Jim Twitter account still tweets about DOGE.

The same month the account tied to the chocolate bar brand made by the American company Mars, Snickers, also tweeted about dogecoin. In fact, the online marketplace Newegg teamed up with Snickers and Milky Way (both owned by Mars) to celebrate “Doge Day” last April.

While Newegg revealed it was accepting dogecoin (DOGE) for online purchases, the candy bar brands Snickers and Milky Way tweeted about “Doge Day” on April 19 in anticipation of the meme currency’s special day.