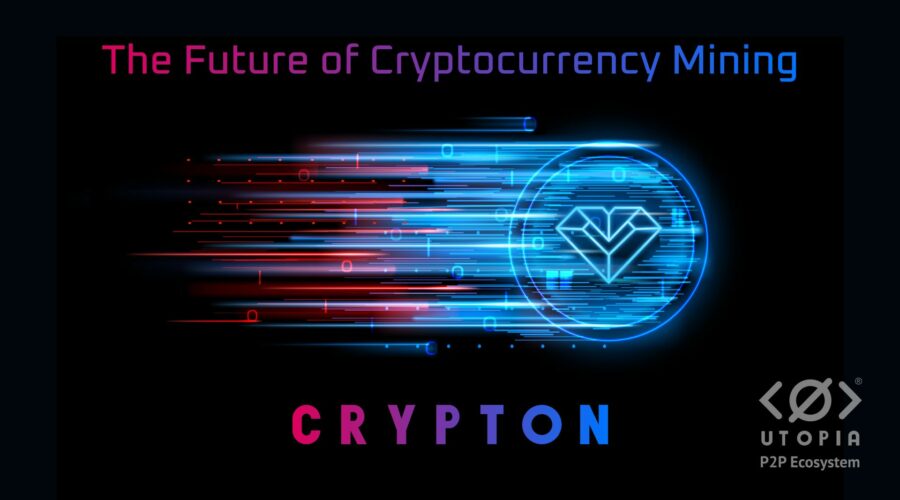 Despite their popularity and news coverage, mining for cryptocurrencies like Bitcoin (BTC), Ethereum (ETH), Filecoin (FIL), and Chia (CHIA) is fraught with problems for most people. The investment in equipment needed to start is a high barrier to entry. Also, a large amount of energy used is costly and environmentally unfriendly.

Trading in these cryptocurrencies is highly speculative and prone to massive swings in value (both up and down).
But there is a cryptocurrency that avoids all these issues: Crypton (CRP), the privacy coin of the P2P ecosystem, Utopia.

Utopia, The People Behind Crypton

To understand how Crypton is different, it’s probably best to start with Utopia: the P2P ecosystem it was created for.
Utopia was started by a group of tech enthusiasts who wanted to do something about the lack of online privacy and threat to our freedom. So, they created Utopia. A decentralized network without a central server for data transmission – or storage.

So, How Is Crypton Different?

We’ve already mentioned that the mining and use of other cryptocurrencies is a problem for ordinary users. So, what exactly are these problems? And how is Crypton different?

Any miner who wants to earn a significant amount from Bitcoin, Ethereum, Chia or Filecoin needs to spend a great deal of money upfront. For instance, Bitcoin requires Application-Specific Integrated Circuits (ASICs), Ethereum needs GPUs, and you will need a number of disk drives if you want to mine FIL or CHIA.

But it gets worse. You won’t need just one hard drive or CPU. You may need to spend thousands to get started.
And then equipment like the Bitcoin ASICs is designed solely for mining that coin. They have no other use beyond that. It all adds up to a high spend to gain a small foothold in these volatile markets.

But just about anyone can mine for CRP using a good-quality home internet connection or a virtual private server. The hardware needed is the kind you find in most homes, and the only other requirement is a static public IP

It truly is Cryptocurrency for the People !

But let’s assume that you have all the equipment to mine for one of those cryptocurrencies. Your next hurdle is the impact on the environment (and on your wallet) that mining will make. It is estimated that it takes 72 thousand Gigawatts to mine one bitcoin. That’s about $7000-$11000!

Not only will your electricity bill make a significant dent in any profits, but the harm using all that energy also does to the environment should give you pause for thought. And the hard work of mining takes its toll on your equipment. For example, hard drives used for mining Chia will typically only last a few weeks, creating a large amount of e-waste.
Because Crypton can be mined on a typical home setup, it doesn’t need vast amounts of electricity, and it doesn’t burn through your hardware.

The crazy fluctuations in the prices of many cryptocurrencies signify that most people are getting into them purely for speculation. In that sense, these people are no different from the hedge fund traders who recently tried to short GameStop stock. They are only interested in short-term gain, not long-term stability of the currency.
But Crypton was created to allow transactions on the Utopia P2P network. It was not made purely for speculation.
No currency is immune from speculators (look at the histories of the US Dollar or the British Pound). But the fact that Crypto is made for real-world practical use should mean that it is less prone to speculators and the violent swings in price that we have witnessed elsewhere.

Is this the future?

We may sound as though we have given other cryptocurrencies too hard a time. After all, most of them were set up with good intentions, and it is not surprising that there have been some “teething troubles” in the early days. However, the makers of Crypton have been willing to learn from these lessons and create a cryptocurrency that is accessible, sustainable and stable – making it a front runner as the cryptocurrency for The Rest Of Us.

29/06/2021 Crypto Comments Off on Crypton: The Accessible, Sustainable and Stable Cryptocurrency
Markets