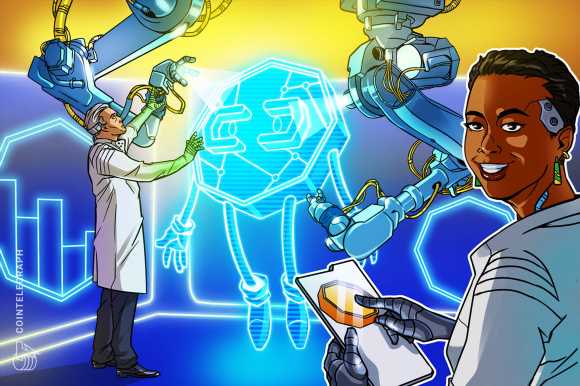 After a rocky start to the new year, March may finally have set the crypto markets back on an upward trajectory. Back in February, news of the war between Russia and Ukraine created significant opportunities for traders to reenter the market at diminished prices. This did not last long, however.

The market soon began to recover, and traders who hoped to see Bitcoin (BTC) fall below $40,000 once more were left on the sidelines.

On March 28, Bitcoin rose back above $48,000 after nearly three months of consolidation. But, surprisingly, key stakeholders with 100 to 10,000 BTC held in their wallets have continued to quietly take profit. 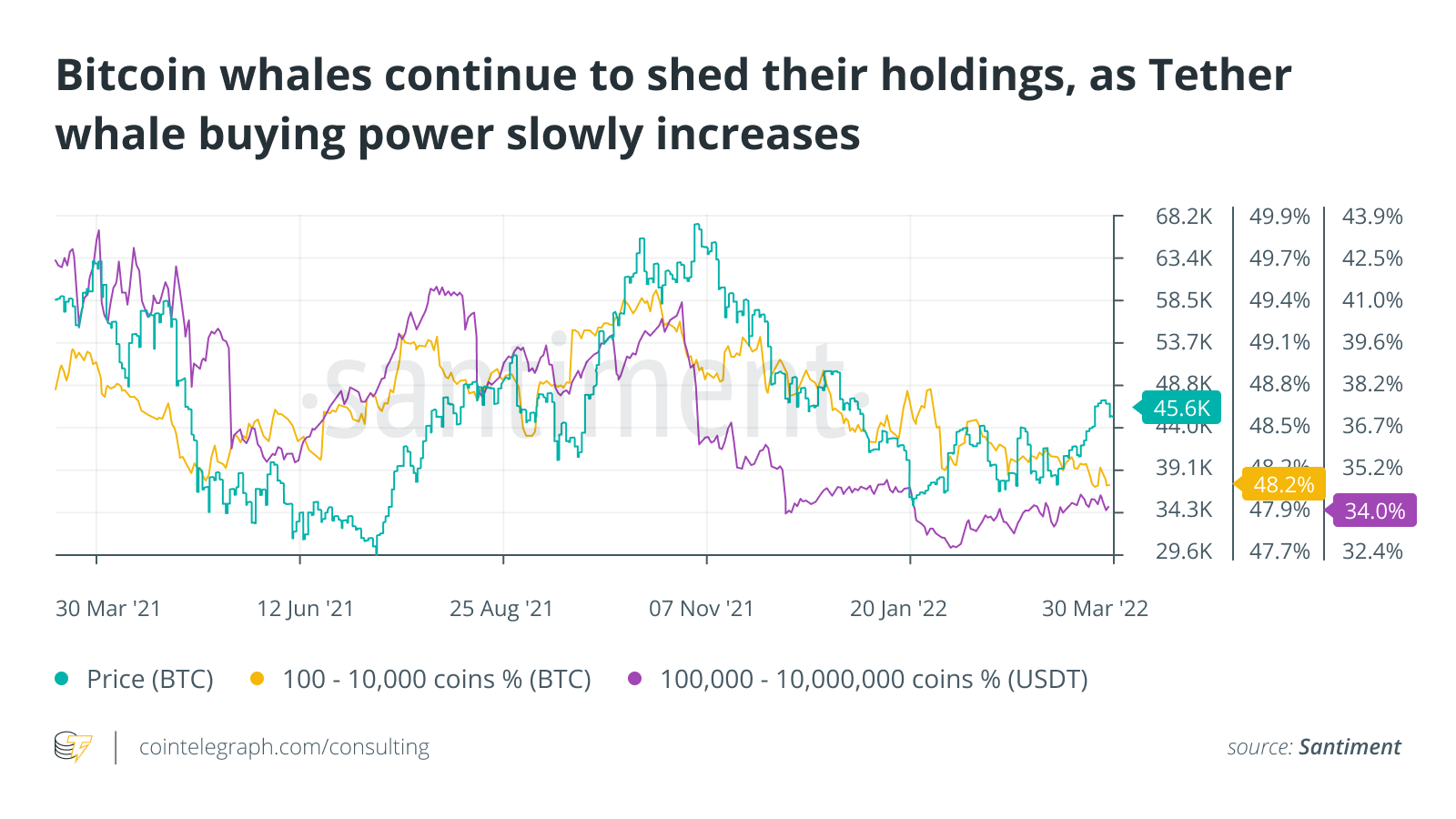 Whales dumped 178,150 BTC over the course of five months, equating to $8.39 billion at current price levels.

Yet, shark and whale Tether (USDT) holders have also dumped $816.4 million in Tether in just three weeks, which compounds the concern further. A bullish scenario would typically need these high-tier traders to hold more USDT as it implies more buying power.

Dormant investments on the move

One of Santiment’s primary metrics confirming that a flat or bearish market may be ending is Mean Dollar Invested Age, and it measures the average age of investments in Bitcoin.

In short, a flattening or lowered period indicates that previously dormant tokens have been moving and reveals a greater chance of long-term bullish price movement. 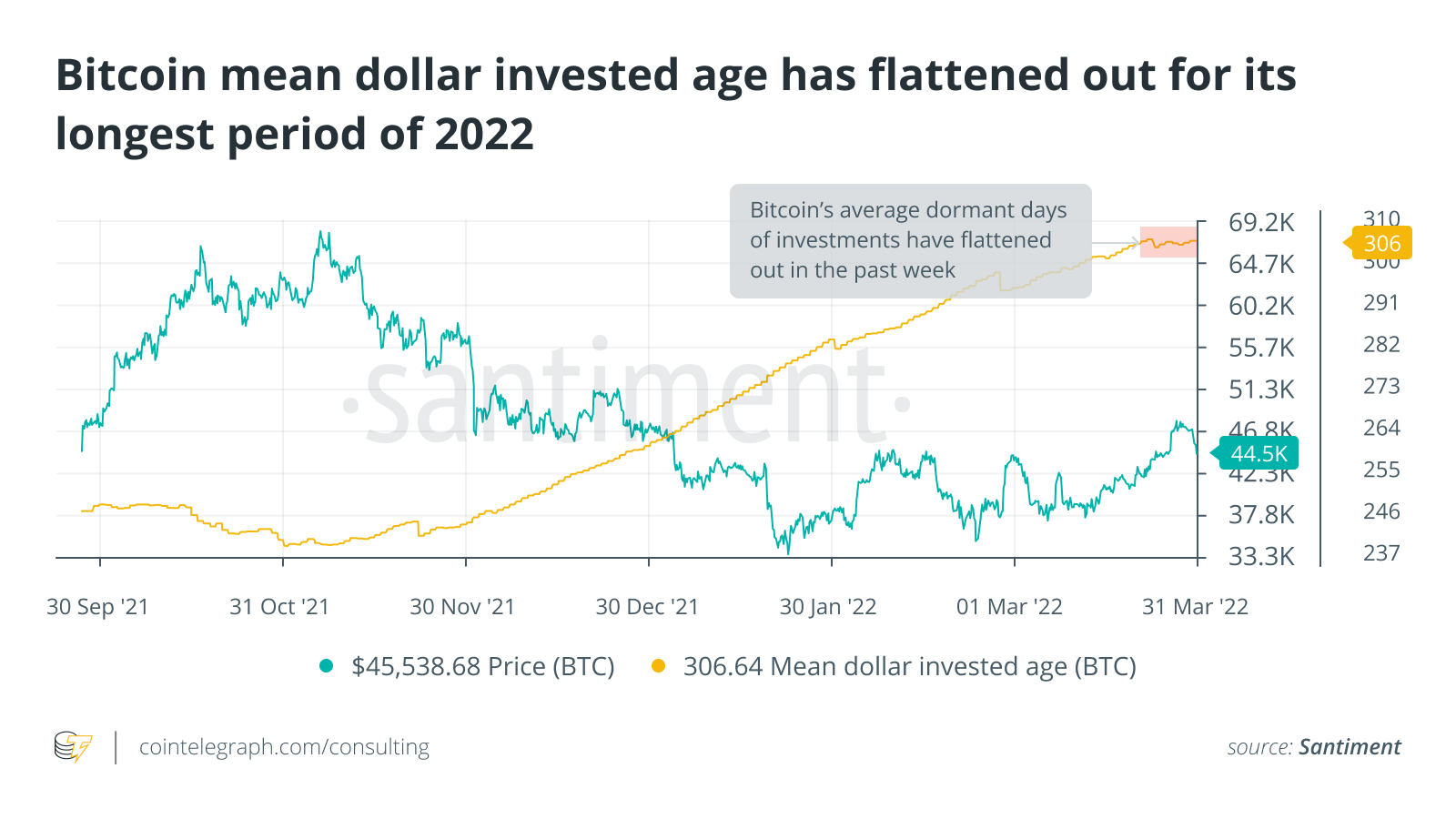 An extended tapering-off period can be seen for the first time in 2022, outside of a few one-day dips in BTC’s Mean Dollar Invested Age line. In most cases, this line tapering off generally foreshadows good long-term prospects for an asset’s price.

Market woes have diminished in March

But, what propelled prices upwards in March so rapidly? For starters, the topic of the war, COVID-19 cases and higher inflation are being less talked about in crypto forums, indicating that the community may believe these market stresses are already past their worst points. 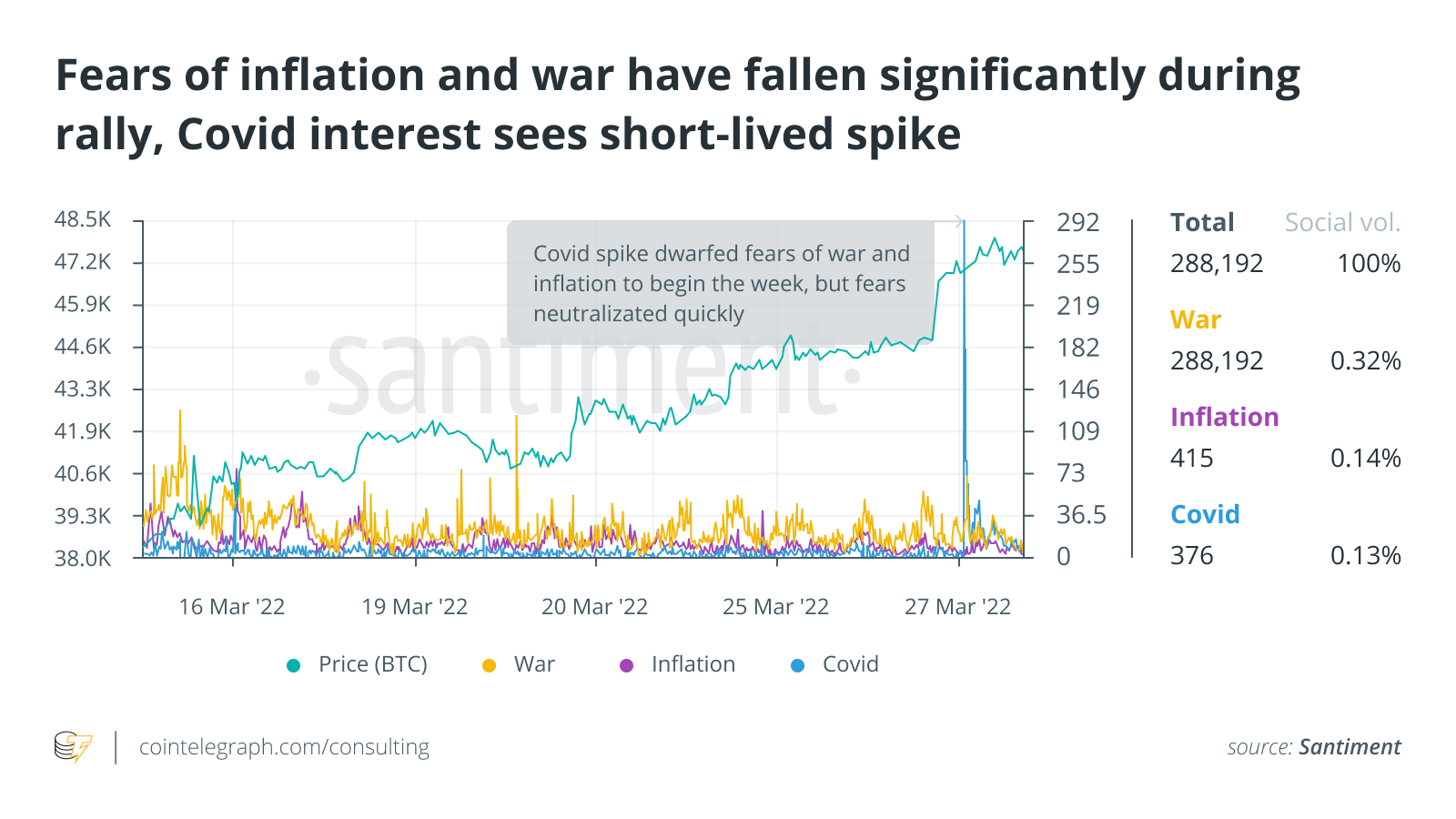 Whales become active when prices have had a sustained pattern of moving up or moving down. When markets are flatter, there is less activity. As March brought great returns right and left, it was only a matter of time until whales made their moves. The number of transactions exceeding a value of $100,000 or more spiked to 3,266 separate transactions just before March 28. 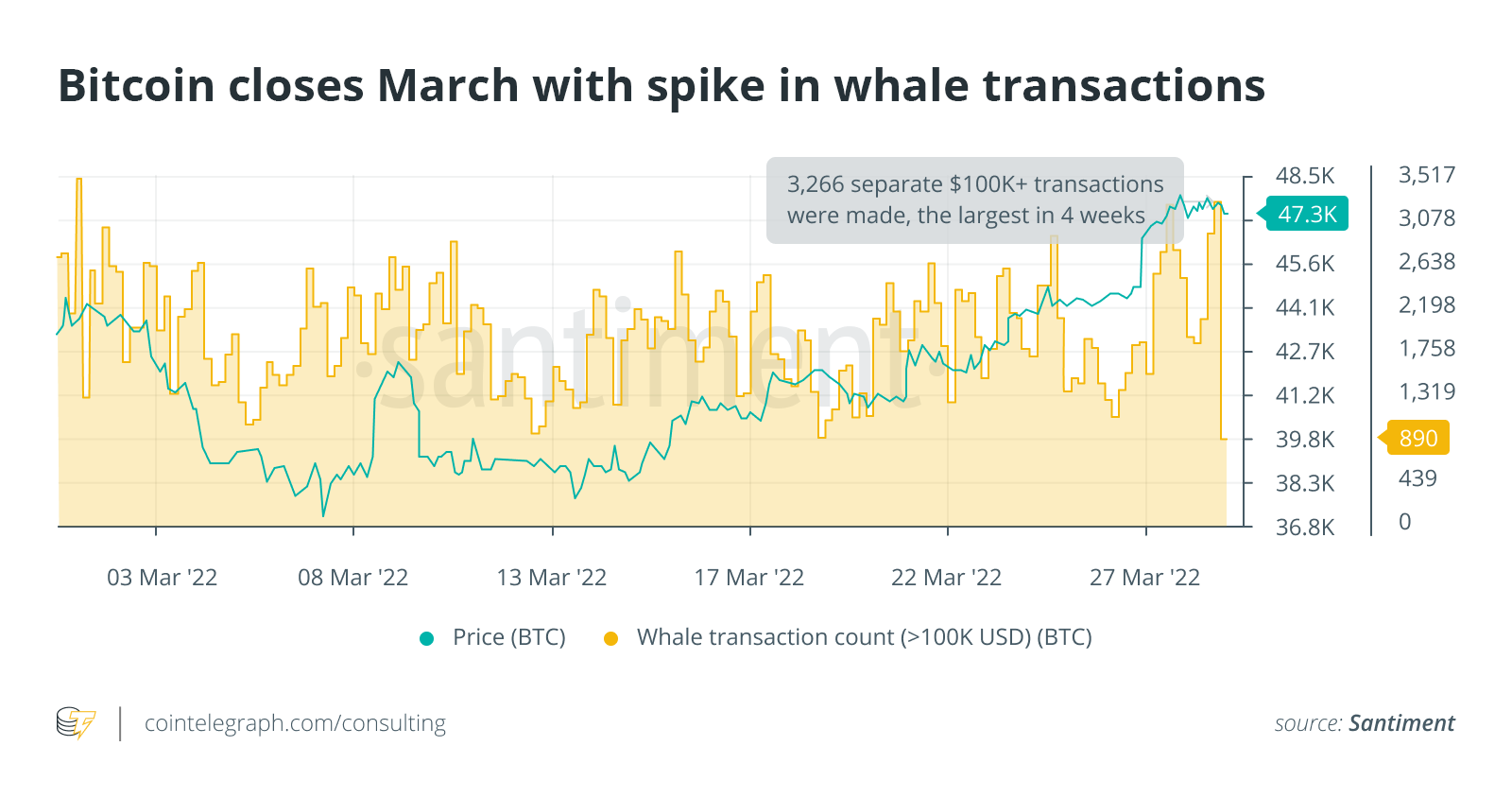 Unsurprisingly, this major spike on March 28 and the day before indicated that whales were taking profits, which preceded a price correction for Bitcoin and the rest of the markets and foreshadowed where traders could and should take profits optimally.

Santiment has a separate metric known as the Ratio of Transactions in Profit vs. Loss, which weighs up profitability against the number of transactions. A higher ratio indicates that more transactions result in a profit, which could eventually signal a top if the ratio gets too high and vice versa. Both Bitcoin and Ether (ETH) saw the most significant spikes in four months on March 28, meaning that both coins had more than three times the amount of transactions made while coins were in profit, compared to the loss. 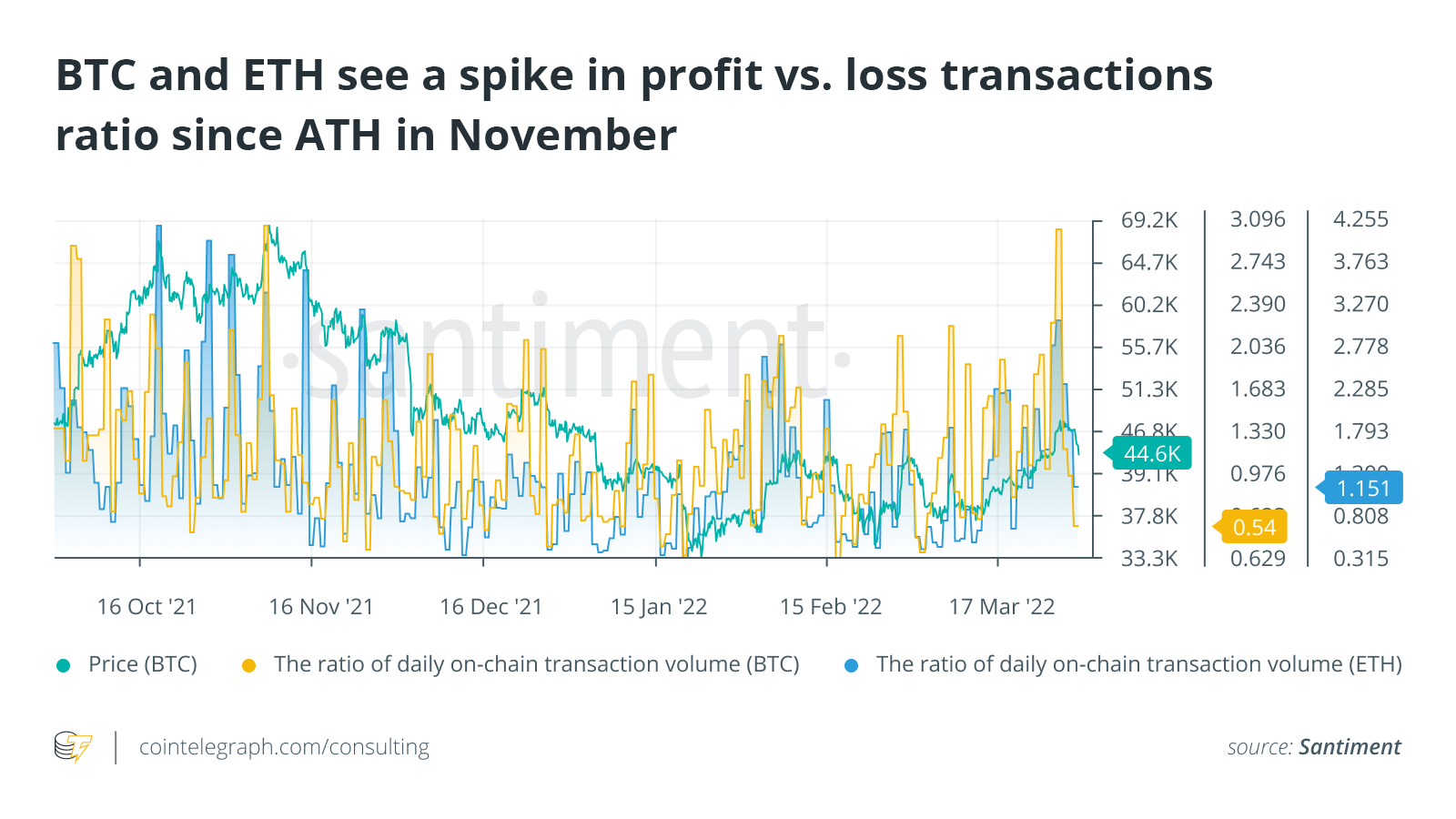 Is the market ready to shift gears?

Eventually, crypto traders proved to be correct as there has been a correction down to $44,000. However, Santiment recorded a continued pattern of negative commentary exceeding positive commentary across several social media platforms. Generally, when the crowd believes prices will go down, prices may actually bounce. And, vice versa, prices tend to plummet when the crowd gets overly euphoric and excited. 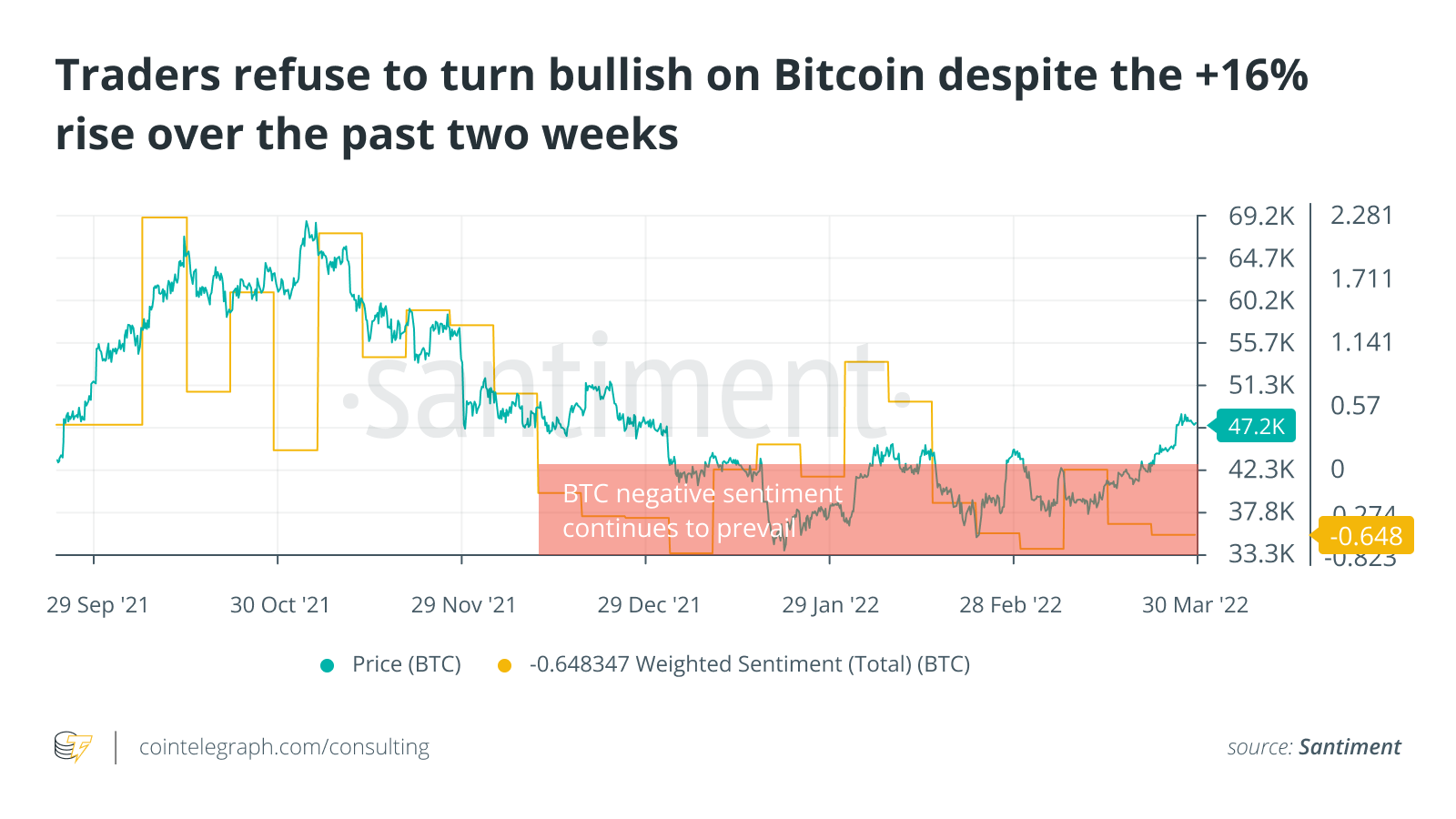 March was full of negative sentiment and had stayed that way ever since the news of conflict in Eastern Europe broke out in the last week of February. Now that a mid-sized price retrace has happened, which was a rare occurrence in March, the markets should shift into speculation mode of whether this is dip buy time.

Cointelegraph’s Market Insights Newsletter shares our knowledge on the fundamentals that move the digital asset market. This analysis was prepared by leading analytics provider Santiment, a market intelligence platform that provides on-chain, social media and development information on 2,000+ cryptocurrencies.

05/04/2022 Crypto Comments Off on Crypto prices enjoy a solid March relief rally. But, how and why?
Markets