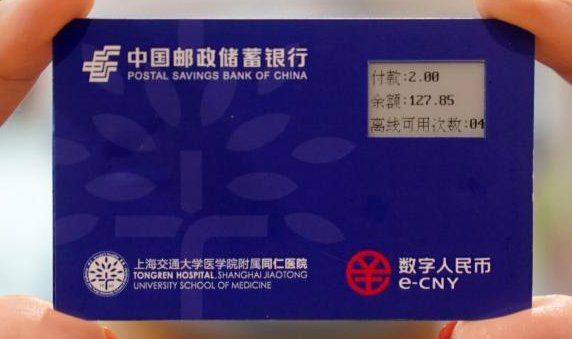 Various forms of digital yuan hardware wallets have been showcased at the 2021 World Artificial Intelligence Conference Innovative Application Exhibition by three digital yuan participating banks, the Industrial and Commercial Bank, China Construction Bank, and the Bank of Communications, all of which have set up a digital yuan exhibition area in their booths.

The hardware wallets come in all sorts of shapes and sizes, including watches, key rings, and even earphone cases.

“In the future, residents only need a digital renminbi hardware wallet, which can basically handle daily payment and other functions, and it will replace most of the physical wallet functions,” said booth staff of the Industrial and Commercial Bank.

Some of these hardware wallets can process offline payments. That’s both through the usual Near Field Communication (NFC) technology, but also quite interestingly they can handle offline QR code payments.

The Shanghai branch of the Industrial and Commercial Bank of China is trailing a smart terminal for opening a digital yuan wallet. Customers can open hardware wallets or software wallets by opening an account in the terminal.

This is only being tested, but in the future e-cny can be bought at these smart terminals which presumably will also provide other basic services.

For now, “you can apply [for e-cny wallets] at business outlets in pilot cities. Generally speaking, you can pass the review within two working days,” a Bank of China staff member said.

The Arrival of Digital Reserve Money

At the first tier the central bank issues the currency through what some are describing as ‘giant apps’ accessible only by commercial banks participating in what is still a pilot, although the list is constantly being expanding to include Alipay and the like.

“WeChat and Alipay are financial infrastructures and wallets, while digital yuan is the content of the wallet,” said Mu Changchun, director of the Digital Currency Research Institute at the People’s Bank of China late last year.

The likes of WeChat in the analogue system have to interface with commercial banks. Now there’s the potential for a decoupling between the app, which one can consider as the equivalent of a bank account, and the contents of the app which can move in a somewhat peer to peer manner.

Commercial banks maintain a key role in as far as they provide to the public access to the app, and they also have the privilege of converting say cash to digital yuan or vice versa. There are no self-custody apps that anyone can put out there to connect to the system as is the case with bitcoin.

As commercial banks control the public app, you’d think digital yuan can’t get out of the banking system, but this is digital cash in as far as this is digital reserve money, something that until now the public has not had access to, only cash.

The public currently, except for the pilot participants, can only access bank IoUs in a digital form, but the piloters have central bank money in their wallet, and therefore if the commercial bank goes under, they are unaffected.

The second way this gets out of the commercial banking system, but of course not that of the central bank – which cash doesn’t either – is through these hardware wallets.

e-CNY, “technically enables small amounts of anonymity,” Mu said previously. One easy example could well be that one of these hardware wallets gets stolen or is gifted. Now both the central bank and commercial banks think Xi is transacting, when it’s in fact Zhang.

Chinese officials thus call the system “controlled anonymity” in as far as all wallet users have to be identified. That also means the central bank in particular has access to all data.

Mainly. An integral component of this system is data analytics with it part of “one currency, two banks, and three centers.”

Officials have claimed over and over again that a blockchain is not being used, but they’ve never quite specified just what exactly is being used.

They claim a blockchain would not be able to handle retail level transactions, but there isn’t much of a reason why a Proof of Authority (PoA) permissioned chain, like Libra, can’t handle global level capacity.

However since the authority here is one, the central bank, what we have is probably an ordinary database to which commercial banks connect with that database getting inspiration from the blockchain.

There’s talk of a hybrid system where the central bank has its own – presumably just a database – and then commercial banks have their own method of connecting to it with a third layer then giving public access through commercial banks.

As the technical design has not been explained for a technical audience, just how this works is a bit hazy, but there is no blockchain explorer, and thus the arguably decisive question: can this have smart contracts?

There’s claims it can and something like ethereum is ultimately a database, so there may be technical ways it can do so, however without a blockchain explorer, it’s not clear how this can have automated finance in the style of defi.

The CBDC/DCEP and now e-CNY design began all the way back in 2014 when there were no smart contracts as we now know them, so in crypto terms and from some descriptions, this might be more a version 1 blockchain.

Bitcoin of course has ‘smart contracts,’ but far too limited to run something like Uniswap. Now we can put Uniswap on this central bank database, and Curve as well as all these dapps, and they can talk/interlope, but how can an entrepreneur connect these dapps without seeing the code?

There’s perhaps no reason why the central bank can’t have an explorer, but for itself. Opening that to the public and even allowing the public to write to it may open security risks as the database itself could perhaps even be hacked.

A more controlled version of this would allow licensed entities to write, but that significantly limits innovation with it unclear how one can issue an e-stock token here and then Compound it to turn the borrowed e-CNY into another e-stock on book orderless Uniswap where others provide liquidity.

That’s the future of finance, automated finance. The code does everything, humans just take decisions. Without that edge, it’s not clear why anyone cares they have access to central bank reserve money especially when they don’t get any of the benefits commercial banks do by having such access, like earning central bank interest from deposits, let alone borrowing rights, but there’s a payment and clearing system so that might have some benefits.

However ultimately central banks care about only one thing: the power to issue money. So if we, as the public, would be unhappy with what is really just more of the same and want public smart contracts, there isn’t really any reason why they wouldn’t provide such service as it does not directly interfere with their sole interest of having the power to issue money.

As such, a central bank copy clone of eth with identical capabilities in regards to defi, tokenization, and much else, is most likely coming.

If not in China, then in Europe or America, and if in neither, then in Sweden or Switzerland. Because one way or another, the technological advancement gap will be closed.

Probably not fully. Crypto will probably always be more open, and thus more innovative, which in turn means central banks will keep playing catchup until crypto innovation reaches the growth stage of the internet with no more obvious low hanging fruits left and so changes to incremental innovation rather than structural.

But the technical edge might probably at some point become a minor distinction primarily based on fixed supply versus managed supply.

In the process, coders will have a field day because if Europe or America in particular manages to get this right to the satisfaction of coders in terms of tech capabilities – which is crucial if they’re going to adopt it – then a whole field of automated code based digital finance opens up.

This will be different to bitcoin which will retain its unique offering of digital gold as a hedge against the mismanagement of fiat supply, but the current money system will at least upgrade and thus should have innovative benefits over the current largely analogue dominant system.

Whether they can get it right however is a big question. eCNY, as it stands, hasn’t because it appears to offer nothing to the public above what the public already had on offer due to it lacking publicly writable smart contracts ala Uniswap.

That’s the base standard they have to meet if they want to compete and actually have the public pay attention with it more a toss up right now whether they can, both due to technical and political challenges, meet this standard.