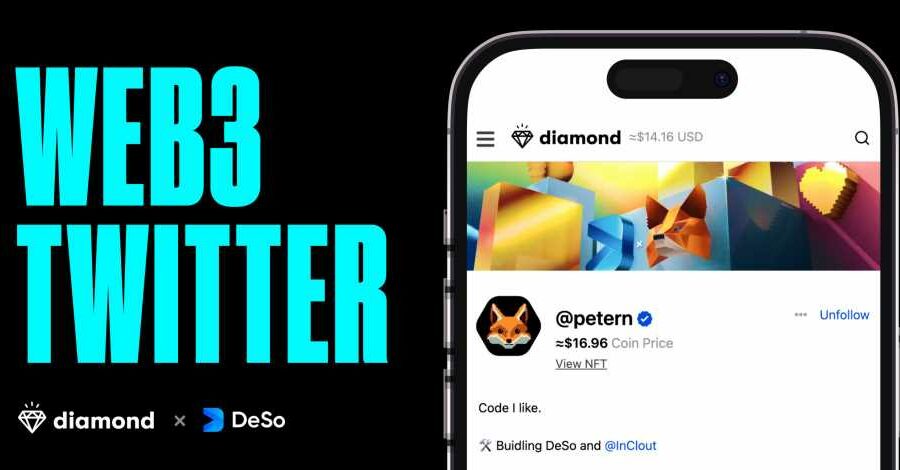 Diamond, a web3 social platform launching on DeSo, is a new blockchain that has raised $200 million from Coinbase, Sequoia, and Andreessen Horowitz. Diamond is the first product ever to enable all posts, profiles, social graphs, and content to be hosted on a decentralized censorship-resistant blockchain. Posts can be minted as NFTs, earn crypto tips, and other novel features.

“I have an idea for a blockchain social media system that does both payments and short text messages/links like Twitter.” Said Elon Musk in one text exchange.
He continued, “Third piece is a twitter-like app on your phone that accesses the database in the cloud. This could be massive.”

However, Musk may not need to create a decentralized Twitter alternative thanks to the launch of Diamond, a Web3 social app powered by the DeSo blockchain.

Diamond is the first platform ever to host its content and social graph on a decentralized blockchain.

For example, posts on Diamond can be minted as NFTs, can earn crypto tips, and much more. Creators on Diamond can very easily launch social tokens that allow their followers to invest in their success. All with an onboarding that is as easy as creating an account on a web2 platform like Instagram.

Diamond’s choice to use the DeSo blockchain for hosting all of its content showcases DeSo’s unique strength in content storage. “Existing blockchains cannot store content efficiently,” says Nader Al-Naji, the founder of DeSo. “It costs about $50 to store a 200-character Tweet on Ethereum, and about fifteen cents to store it on Solana, Avalanche, or Polygon. In contrast, DeSo is one ten-thousandth of a cent, making it the first blockchain capable of disrupting storage-heavy applications like social, blogging, and even marketplaces,” he says.

In addition, Diamond’s integration of the DeSo wallet makes it possible to onboard Ethereum

users as well as mainstream users. “The DeSo wallet supports both a one-click Google login and a one-click MetaMask login,” says Al-Naji. “It’s not our goal to be tied to a single chain, or really any chain. We just want to allow people to connect with each other no matter what ecosystem they’re a part of. DeSo is the unified social layer for all of web3,” he says.

This is the latest in a recent string of successes for DeSo. The platform listed on Coinbase earlier this year announced a groundbreaking MetaMask integration last week that has caused a significant price surge. It has also been experiencing a recent surge in user numbers.

In a world where many are dissatisfied with traditional social media, Diamond and DeSo offer a decentralized solution that can finally compete with web2 juggernauts. “DeSo is the first and only blockchain that allows developers to build social apps where you can’t even tell you’re on a blockchain,” says Al-Naji. “That means, for the first time, we have a shot at finally expanding web3 from disrupting finance to disrupting the trillion-dollar social media industry.”