It is a new day for Bitstamp, one of the largest crypto platforms in Europe, as the co-founder Nejc Kodrič is stepping down from his chief executive role after nearly a decade at the helm of leadership.

Julian Sawyer, who until recently served as managing director of the UK and Europe at Gemini, is taking over as the second chief executive officer in Bitstamp’s history, which dates back to 2011.

Julian joins Bitstamp after a short stint at crypto exchange and custodian, Gemini, having spent nearly 11 months there. Prior to that, he was Chief Operating Officer at UK mobile bank Starling Bank, tasked with business operations, payment systems, card operations, and customer support. Julian co-founded Starling and led it through periods of growth, including scaling its app, which has reportedly onboarded more than one million users.

Other initiatives in Julian’s career as entrepreneur includes starting up Bluerock Consulting, a financial management consultancy, which he led as CEO from 1999-2011 until it was sold in 2012.

Over the course of three decades experience in financial services industry, he also worked as a management consultant at Accenture and Ernst & Young.

Reflecting on his appointment, Julian Sawyer shared: “Bitstamp has an unrivalled reputation in our industry that dates back to the start of the company more than nine years ago. I feel privileged to have been asked to join as CEO and become part of a fantastic team across Europe, the US and Singapore.”

The outgoing CEO Nejc Kodrič, an entrepreneur and Bitcoin enthusiast based in Slovenia, moves into a new advisory role on the company’s Board of Directors. He will continue to provide direction and play an important role in the future of the company. Bitstamp confirmed Kodrič was an active part of the search committee to find his replacement to ensure the future success of Bitstamp. 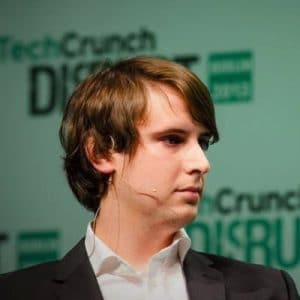 “After much thought, I’ve come to the conclusion that Bitstamp has already grown beyond what I envisioned it would become and it is time for someone else to expand this vision further. Although we’ve grown exponentially, it still feels like Bitstamp is just getting started. I believe we’re on the verge of great things, all of which entail bringing more financial freedom to millions of people around the world,” Kodrič said.

Bitstamp celebrates its ninth year in operation, making it the longest-running crypto venue in a sector plagued by hacks and exit scams. The exchange is currently ranked six in terms of total spot trade volume, ‎according to the latest data provided by CoinMarketCap.‎

When it started in 2011, the exchange was based in a garage in Luxembourg, funded by only €1,000 and run between a single server and two laptops.