BTC has a market capitalization of close to $1 trillion, whereas BSV is around $3 billion, or 0.3%. Many people ask why is BSV so cheap compared to BTC? Such questions are at the heart of the Efficient Market Hypothesis (EMH), a cornerstone of modern finance theory.

There are endless disputes about what the EMH actually means for asset prices, or indeed whether it’s just an empty tautology (as Paul Samuelson, who won his Nobel Prize for other stuff, seemed to believe when he ‘discovered’ ‘efficient markets’ before Fama).

As with ketchup, the EMH tells us little about what Bitcoin should actually be worth, but the different Bitcoins can be compared. We can ask, does one Bitcoin equal one Bitcoin? If not, why not?

The table below illustrates key metrics of the three protocols of Bitcoin: BTC, BCH and BSV. Hash rate and ‘network nodes’ are essentially input costs (although the true number of ‘nodes’ in BTC is actually only around 30 block creators, as opposed to the number ≈11,600 network observers used in this data); transactions and block sizes are the outputs. Bearing in mind that Bitcoin was designed as a transaction processing system, BTC is very expensive to run and produces very little output. In contrast, BSV is very cheap to run and produces the majority of output. 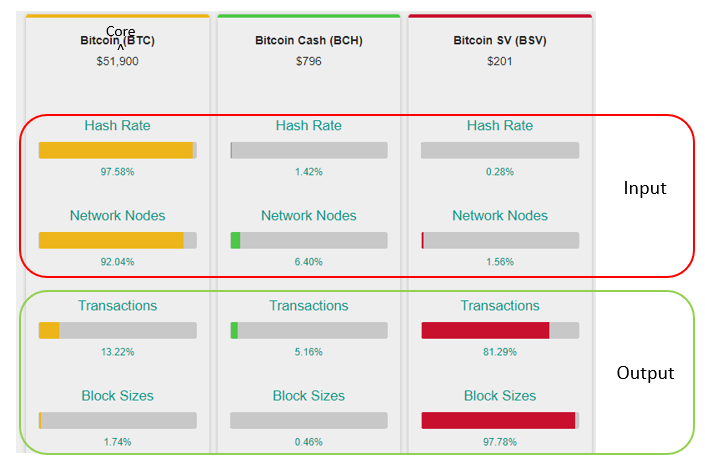 With BSV around 0.3% of the value of BTC, BSV’s biggest problem appears to be that it is offering a cheap and efficient product when the market has been deceived into believing it wants a costly and inefficient product. This is not sustainable in an efficient market.

So what’s going on?

Pricing tradeable capital assets based on an inherently unknowable future is the unique feature of a capitalist system, and why the principal activity of capital market participants is about collecting and processing information to better understand the future potential of assets (to infer the probable current value). But in Bitcoin, there is something rather unique going on: warring narratives.

Each ‘tribe’ of Bitcoin has its own narrative. Essentially, BCH is about ‘privacy’ (money laundering in technical language). BTC Core (BTC) is about artificially induced scarcity and ostensibly ‘security’ (however technically misplaced that notion is). Bitcoin Satoshi Vision (BSV) is about functionality and productivity (an enterprise blockchain for cheap micropayments, smart contracts and much more).

Misinformation is bad for capitalism

‘Crypto’ shares many features with historical bubble episodes, but it is the first asset class to develop in the age of social media and ‘citizen journalism.’ There is no cost to creating misinformation and FUD. There is actually a strong incentive to pay people to produce misinformation. This is especially true when a new technology emerges which is difficult for outsiders to understand, and one which is essentially unregulated. Monopoly building in this space is the product of information warfare.

Part of the broader ‘crypto’ narrative is comfortable in recognising the potentially pernicious role of misinformation in the realms of state propaganda. Edward Bernays argued in ‘Propaganda’ that government PR is simply an extension of corporate PR, and is an inevitable part of maintaining ‘order’ in a democratic society.

Strategic narratives are an imperative in this system, and today social media is the frontline in the geopolitical information warfare of competing narratives. It’s now regarded as a key risk to the existing ‘liberal order,’ and reason enough to deploy crack troops (such as Britain’s 77th Brigade) to plant approved narratives, and de-legitimize alternative narratives (whether from internal actors or foreign governments).

As many people in the ‘crypto community’ are aware, the social media companies have been seconded into this process, and while likely regarding all this as obviously true, BTC folk seem very reluctant to accept that while part of their own narrative is poking fun at people for being pawns to power, they themselves are useful idiots for corporate propaganda promoting a self-serving monopoly: Bernays’ ‘invisible rulers.’

CEOs of companies involved in the space are free to make what might be regarded as either mind-boggling facile, or even ‘false and misleading,’ statements on social media, without any sort of comeback from regulators. How can an honest narrative be claimed when the alleged benefits of ‘monetary energy,’ even if it is a completely idiotic meme, are promoted by a high-profile CEO?

Or even that Bitcoin will unite the world?

While these ridiculous memes are implied to come from some higher plane of understanding, it’s clearly nothing more than brand promotion for their particular tribe, BTC. It is no secret that BSV has been actively suppressed, with many exchanges acting as a cartel to delist BSV as a barrier to adoption. Although serious investors might not understand this because the information is suppressed:

Why are they doing this? Adam Smith warned 250 years ago that “People of the same trade seldom meet together … but the conversation ends in a conspiracy against the public, or in some contrivance to raise prices.” The ostensible argument is that they don’t like Craig Wright, and (at least publicly) they declare that he’s not the creator of Bitcoin. This might be ‘logical’ from a hive of self-serving cyber-hornets or sock-puppets on social media, but we’re dealing with supposed adults at the head of major corporations.

Arguably, they want to pump a pointless ‘scarce digital asset’ (which is actually easily replicable) to help their own financial interests. More fundamentally they don’t like competition from a technology which kills their lucrative legacy business models. Dubious feel-good PR gets promoted as ‘information’ and FUD against a cheaper, superior technology is promoted because it defuses the threat to existing monopolies. The narratives are promoted by credulous and often conflicted ‘journalists’ in the corporate media.

Alongside the ‘monetary energy’ and world peace nonsense, one of the greatest PR exercises in BTC is the stock-to-flow (S2F) ratio. Seemingly any price can be justified because, er, ‘science.’ The so-called S2F model obscures the fact that demand is actually important in a demand-supply analysis (what’s known as Alfred Marshall’s Scissors: each blade is important).

Again, the benefit of the EMH is that its value is not in absolute price predictions, but in comparing similar assets. The S2F model is seeking to compare BTC to gold and silver but ignores the fact that the stock-to-flow ratio is essentially exactly the same for all Bitcoins: BTC, BCH, and BSV. In reality, the S2F model is implicitly arguing (yet ignoring) that while the S2F ratio might be useful in selecting potential scarce monetary assets, demand is actually the key (unknowable) variable in determining prices.

By extrapolating a historic trend into the future, the S2F model is also implicitly stating that—unlike any other market in history apparently—demand for BTC is invariant to price. Why wouldn’t all the financial wealth in the whole world be ‘invested’ in a pointless digital asset? If the S2F model is alleged to make BTC look cheap, it makes BSV look like the opportunity of the century! But you won’t hear that in the ‘science.’

The principal explanatory factor is clearly demand, not supply, but the point of the S2F model is to create social-media buzz to promote BTC. It may help pump the short-term ‘demand,’ but sustained demand is ultimately a product of utility, not merely the finding of more greater-fools.

Such information warfare has destroyed the market’s ability to sensibly price assets in this space. This is not just one of the largest bubbles in history, it is a bubble which has consciously seconded the information warfare potential of unregulated global markets and social media to sustain it. Misinformation in this space is cheap to produce, lucrative, and easy to avoid accountability. Unfortunately, it is also extremely damaging to the underlying economic system.

It’s clear that the ‘crypto’ narrative has been developed precisely to undermine the notion of efficient markets, that prices reflect all available information. The cyber-hornets, supported by monopoly rent seekers and lazy and conflicted churnalism, continue to produce a hugely manipulative misinformation narrative to pump a bubble.

The narrative has served BTC promoters well to date, yet recently the media focus has been on BTC losing the information war to Ethereum. But as the narrow confines of social media bubbles expand to include regulated perspectives, more discerning investors and cost-effective real-world business cases, true and useful information will eventually tell the story. Truly efficient markets will likely ring the death knell of the ‘crypto’ bubble, but don’t expect BSV to be worth less than 0.5% of BTC forever.

13/09/2021 Crypto Comments Off on Bitcoin: The deficient market hypothesis
Markets