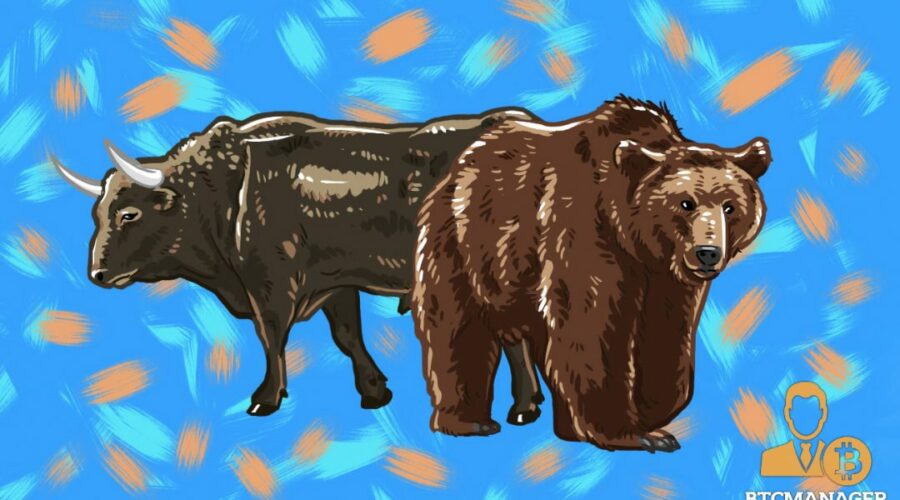 The Ethereum Project token ETH was highly volatile on the last day of the previous week. It was moving up and down the zone between $3,860 and $3,340 before closing with a red candle at $3,580 – below the previous uptrend line, but still above the horizontal support.

The ether was 9 percent down for the seven-day period.

On Monday, the coin continued to move downwards and erased another 8 percent, lost the 21-day EMA, and reached $3,280.

The overall market decline affected the previously unstoppable ETH bulls and they started losing ground. The mentioned $3,500 support turned into resistance, which was normal given the fact it was only tested once in the current run. The Tuesday session was not that good for buyers as they were rejected at the horizontal level and only managed to form a short green candle to $3,370.

The third day of the workweek came with a flash crash. The ETH/USDT pair dropped as low as $1,845, which corresponded to a 45 percent decline, but recovered in the latter part of the session, eventually closing at $2,455.

On Thursday, May 20, the coin’s price was again unstable, initially falling to $2,160, testing the support level than climbing up to the 50-day EMA on the daily chart near $2,753.

The Friday session was a continuation of the downward movement. The ether closed at $2,435 but not before hitting again the mentioned support at some point during intraday trading.

The weekend of May 22-23 came with a second consecutive day in red on Saturday when the ETH token made one step down and touched $2,230.

Then on Sunday, it dropped as low as $1,715 for the first time since March but quickly jumped back into the uptrend corridor.

At the beginning of the new week, the ETH/USDT pair reclaimed the $2,200 support and is now trading 9 percent higher.

The Binance exchange native token BNB was one of the worst performs among the leading cryptocurrency projects erasing 54 percent of its market cap on a seven-day basis.

The coin was already heading South thanks to the rising interest in Layer 2 solutions like Polygon. The platform was seen by many as an improvement to the Ethereum blockchain fee’s structure, but with better security compared to the Binance Smart Chain.

Additionally, some of the biggest yield aggregators on BSC – Pancake Bunny, Venus and Bogged Finance were all exploited leading to massive losses and a severe selloff of their respective tokens.

Our Altcoin of the week once again is Polygon (Matic). The leading Layer 2 solution registered a new all-time high on Tuesday, May 18 by hitting $2.7, but closed the previous seven-day period 61 percent below that mark.

The coin temporarily surpassed the Ethereum blockchain in terms of daily transactions and continued to attract more and more established projects to its ecosystem.

The $0.75-$0.85 area acted as strong support on Sunday afternoon, which triggered a solid reversal to the upside.

The MATIC/USDT pair is currently trading at $1.42 or 89 percent higher compared to yesterday’s low.