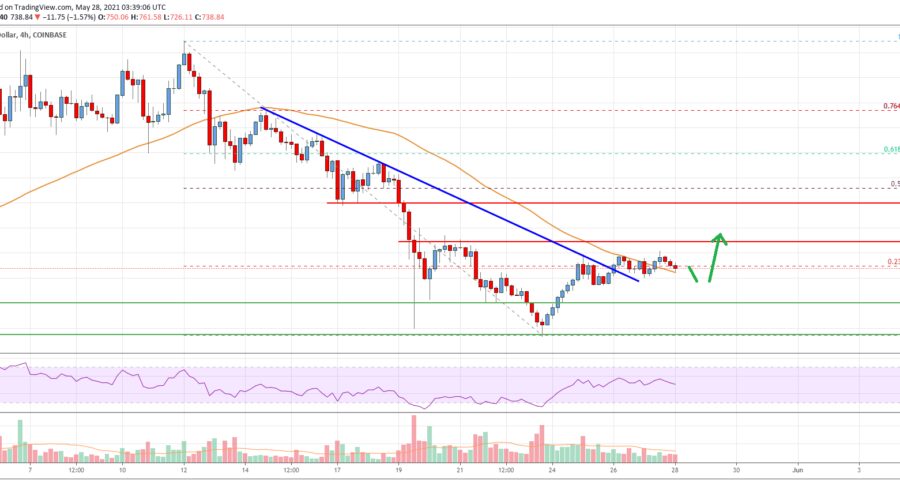 Bitcoin cash price is recovering losses from $500 against the US Dollar, similar to bitcoin. BCH/USD must surpass $850 to move back into a positive zone.

After a sharp decline, bitcoin cash price settled below the $1,000 level. BCH broke many important supports near $850 to move further into a bearish zone.

The price even broke the $650 support level and settled below the 55 simple moving average (4-hours). Finally, the price spiked below $500 and traded as low as $471. Recently, there was an upside correction above the $600 and $650 levels.

There was a break above a major bearish trend line with resistance near $750 on the 4-hours chart of the BCH/USD pair. The pair climbed above the 23.6% Fib retracement level of the key decline from the $1,645 high to $471 low.

The next major support is near the $600 level. Any more losses could lead the price towards the main $500 support zone.

Looking at the chart, bitcoin cash price is clearly trading just above $700 and the 55 simple moving average (4-hours). Overall, the price is consolidating and it might attempt an upside break above $800 and $850 in the near term.

4 hours MACD – The MACD for BCH/USD is now losing pace in the bullish zone.

4 hours RSI (Relative Strength Index) – The RSI for BCH/USD is close to the 50 level.